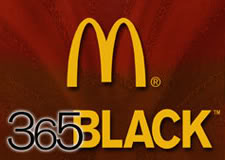 McDonald’s USA and the American Black Film Festivalare joining forces to launch the McDonald’s Lovin’ Video Competition. To complement the new “Lovin” campaign, up-and-coming filmmakers are challenged to create one 90-second film that brings to life McDonald’s philosophy that, “A little more lovin’ can change a lot.”

Aspiring filmmakers nationwide are encouraged to enter their best, original submissions by 11:59 p.m. Eastern March 24, 2015, for their chance to win the grand prize and earn accolades from film industry leaders. Three finalists will be selected to attend the 19th annual American Black Film Festival in New York City, June 11 -14 and have an exclusive opportunity to be mentored by critically-acclaimed film directorMalcolm D. Lee (Best Man; Best Man Holiday), who will provide the finalists with invaluable film industry tips and advice.

The top three short films will premiere at the highly-anticipated festival and will be judged by a panel of industry experts. Each submission will be critiqued on creativity, implementation of concept and quality. In the end, only one finalist will take home the grand prize — a film equipment package valued at $2,500 and an opportunity to have their film featured on prominent websites, including McDonald’s 365Black.com and other media entities. More information about the competition can be found at www.abff.com.

“We are excited to partner with McDonald’s USA on this most unique digital video contest,” said Jeff Friday, American Black Film Festival founder and chief executive officer. “The ABFF is committed to supporting emerging artists and providing trailblazing opportunities for them to gain exposure and visibility in the film and television industry.”

“I’m honored to mentor our next generation of aspiring filmmakers through ‘Lovin’ Video Competition’,” said Malcolm D. Lee. “Many have mentored and guided me along my journey to make an impact in film, and it’s important for all of us to do our part to bring the next generation up.”

McDonald’s newest campaign reignites the spirit of “i’m lovin’ it” and will inspire everything the brand does moving forward. By focusing on the lovin’ people show each other every day, the campaign provides an opportunity to celebrate and bring more lovin’ to customers.

“McDonald’s is excited to embark on this initiative with ABFF and the filmmakers of the future from the communities we serve,” said Kristen Wells, External Communications Manager, McDonald’s USA. “We hope that the idea of sharing love throughout our communities will motivate and inspire the filmmakers as they work tirelessly to make their dreams a reality.”

The Lovin’ Video Competition and ABFF’s vision to promote diversity in the film and television industry align with McDonald’s 365Black platform — an initiative that celebrates the pride, heritage and achievements of African-Americans year round.

McDonald’s encourages those who live out lovin’ in their lives each day to follow @365Black on Twitter and join the conversation using #365LovinFilm. To learn more about the 365Black initiative, visitwww.365Black.com.