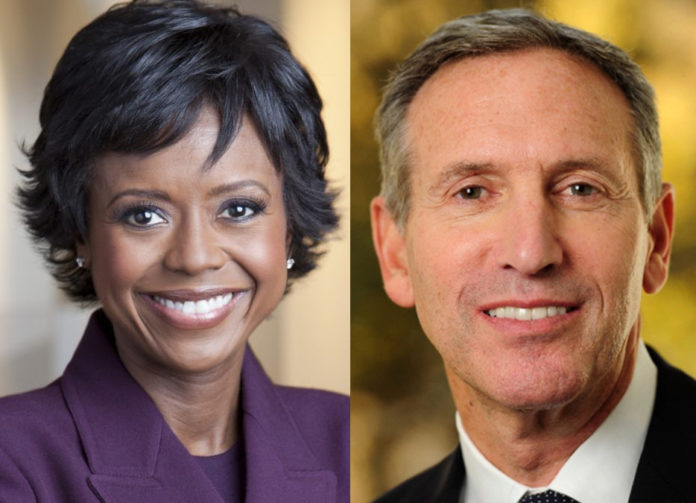 Mellody Hobson, one of the most respected and knowledgeable black business leaders, will move up to the role of vice chair at Starbucks when longtime chairman Howard Schultz steps down at the end of the month.

After Starbucks’ tumultuous year, marked with the scandal of the arrest of two black men at one of its Philadelphia stores, Howard Schultz announced today that he will be relinquishing his role as chairman at the company he has run for the past three decades. While Myron E. Ullman, the former chairman of J.C.

Penney, will take over as the company’s new chairman, Hobson, who has been a director on the board, will now take over the role of vice chair, making her one of the very few African Americans in history to occupy such a role at a Fortune 500 company.

Hobson, 49, joined Ariel Investments, LLC, the largest African American-owned money manager in the United States as an intern in 1999. She rose through the ranks, becoming the president of the investment firm with $13 billion asset under management. Under her leadership, Ariel Investments was named No.1 on the BE Asset Managers list in 2003.

“She has a grace and graciousness about her that is singular,” Jeffrey Katzenberg, the former CEO of DreamWorks Animation, who had worked with Hobson, told Vanity Fair in 2015. “She is remarkably unique. She’s a stunning person. I get a little nervous talking about her because the words are so flowery. But it’s truly how I feel about her.”

Facebook COO Sheryl Sandberg, who credits a comment Hobson made with inspiring her to write her best-seller, Lean In, recalled her saying, “she wanted to be unapologetically black and unapologetically a woman.”