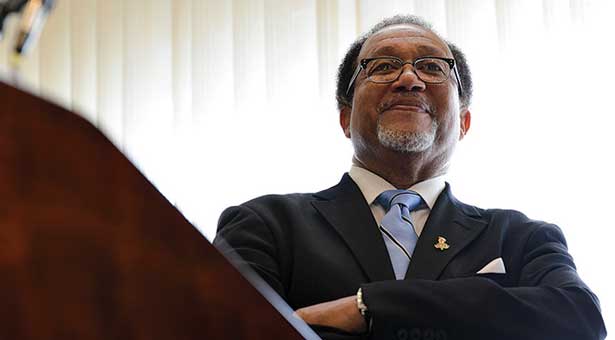 When civil rights icon Dr. Benjamin Chavis was named president and CEO of the National Newspaper Publishers Association (NNPA), he remained true to form, touting the Black Press as the uncensored, objective and unflinching media voice of the Black community.

On that sun-soaked day in June 2014 in Portland, Oregon, Chavis proclaimed his eagerness to deliver “trusted, sustainable and innovative relationships for the NNPA.”

Under Chavis’ leadership, the organization has increased its visibility and has continued to carve out a name as a trusted and respected news source.

Now, the NNPA, a network of 211 Black-owned media companies, has received a $1.5 million grant from the Bill & Melinda Gates Foundation to support a three-year, multi-media public awareness campaign focusing on the unique opportunities and challenges of the recently enacted Every Student Succeeds Act – or ESSA.

“The NNPA is pleased to partner with the Bill and Melinda Gates Foundation to raise public awareness throughout the United States about the ESSA,” Chavis said. “Bridging the academic achievement gap in education K-12 in particular for African-American students and others from disadvantaged communities is of critical importance over the next several years.”

Chavis noted that, in 2017, the Black Press in America will celebrate 190 years in publishing and there’s no more important issue than the education of students from communities who cry out for the highest quality education.

“The ESSA law was established to help increase the effectiveness of public education in every state,” said Chavis. “Our task is to inform, inspire, and encourage parents, students, teachers, and administrators to fulfill the intent and objectives of ESSA with special focus on those students and communities that have been marginalized and underserved by the education system across the nation.”

Under the ESSA, states will adhere to more flexible federal regulations that provide for improved elementary and secondary education in the nation’s public schools.

The law also ensures that every child, regardless of race, income, background, or where they live have the opportunity to obtain a high-quality education. ESSA, which reauthorizes the Elementary and Secondary School Act (ESEA) and replaces No Child Left Behind, received bipartisan support and was signed into law by President Barack Obama on December 10, 2015.

The regulations are administered by the U.S. Department of Education and will go into effect later this month, on January 30.

With the Gates Foundation grant, NNPA will engage its 211-member publications in more than 70 markets across the country in a campaign designed to heighten public awareness of ESSA, and to focus on efforts and policies aimed at closing the achievement gaps for students of color and low-income students, Chavis said.

By raising awareness of ESSA policies, the Washington, D.C.-headquartered NNPA seeks to empower parents to advocate for these policies for their students and communities, he said.

Additionally, for opinion leaders, this is a tremendous opportunity to support policies and issues that will make a difference in closing the achievement gap, Chavis said.

“The ESSA grant is critical to improving education for minorities,” said Dr. Elizabeth V. Primas, the project manager for the NNPA/ESSA grant and director of Literacy and Acceleration at the Friendship Public Charter Schools. Primas has a lifelong history of achievement in teaching and leadership within D.C. public schools.

“Despite past laws, many minorities have been left behind,” said Primas. “NNPA will be instrumental in ensuring that all stakeholders are aware of the components in the ESSA law that will increase the number of students that are college ready.”

Specifically, the NNPA will research state efforts to ensure success for all students, gather feedback while conducting forums, and maintain multiple platforms to keep the community informed, she said.

“For the Bill and Melinda Gates Foundation to give the grant to NNPA to fund a 36-month multi-media public awareness campaign focused on the unique benefits and challenges of ESSA to the African-American community, means that the Gates Foundation understands and appreciates the value, reach, and influence of NNPA,” Primas said.

NNPA Chairperson and Washington Informer Publisher Denise Rolark Barnes said she is proud that NNPA will be counted on to get the word out about ESSA to the NNPA’s 20 million newspaper readers and those who Follow and Like the Black Press USA on social media.

“We look forward to inciting interest and action around ESSA and making it a household name throughout the community,” Rolark Barnes said, noting Obama’s words when he signed the bill into law.

Obama said: “With this bill, we reaffirm that fundamentally American ideal – that every child, regardless of race, income, background, the zip code where they live, deserves the chance to make of their lives what they will.”

In a statement, Senator Patty Murray (D-Wash.), Ranking Member of the Senate Health, Education, Labor, and Pensions (HELP) Committee, and Congressman Bobby Scott (D-Va.), ranking member of the House Committee on Education and the Workforce, said passing ESSA was a “critical step in our work to make sure all children have access to a high-quality public education, no matter where they live, how they learn, or how much money their parents make.”