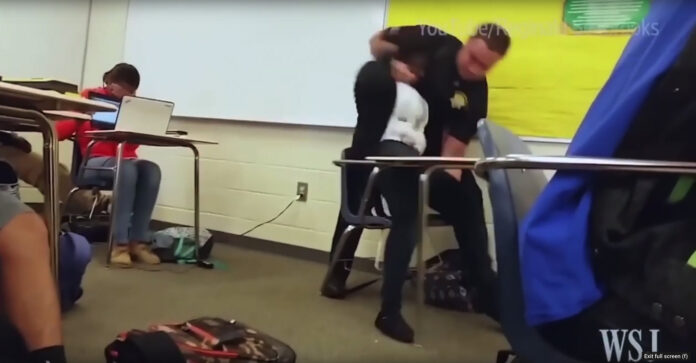 Black girls who have been subject to punitive school policies and practices are at an increased risk of coming into contact with the juvenile and criminal courts and leaving school altogether, ultimately impeding their ability to achieve future success and lead successful and healthy lives, according to a new documentary, “Pushout: The Criminalization of Black Girls in Schools.”

The film presents a number of these stories in heartbreaking detail and further explores a topic that was originally presented in the 2016 book of the same name by Monique W. Morris.

“Why not go to heaven now? I don’t want to be here,” Samaya, one of the girls featured in the film, says at one point.

At 12, Samaya is now an honor student. It has taken years of therapy and a change of school for her to recover from the traumatic incident that led her to a bridge above a highway contemplating suicide at the age of 7.

The event: One of her teachers, Mr. Rodriquez, gave Samaya a warning after a minor disagreement with another child.

Then, after Samaya accidentally knocked over a glass of water, Rodriguez punished Samaya by dragging her and her chair outdoors “in a fit of frightening rage.”

The teacher pulled Samaya out of her classroom on a cold 46-degree December morning. She did not have on a coat or jacket. She was wearing only a pink and gray sweatshirt and blue jeans.

Coping with the death of her beloved father, the destruction by fire of the only home she knew, and facing constant bullying, Ariana, another story shared by the filmmakers, found herself at a breaking point. “There is so much rage building in me,” the teen shares in the film.

Now, 16, Ariana said she didn’t know how to deal with the adversity she faced at home and school. She was suspended multiple times as classmates would pick on her because “I don’t look the way they look or dress the way they dress.”

Fortunately, a change in schools altered the trajectory of her life. Ariana, now a drummer in her school band at the Columbus City Preparatory School for Girls, has been able to turn her life around with the help of teachers, whom she credits with guiding her toward a positive response to the challenges she faces.

Some Black girls, like Samaya and Ariana, face educational, judicial, and societal disparities.

Black girls, and other girls of color, experience discriminatory, disparate, punitive, and unfair treatment in school, including suspensions, expulsions, referrals to law enforcement and arrests on school campuses, at rates that exceed the public school population in aggregate — and far exceed those experienced by their White female peers.

“This has to change. Our girls deserve more,” the filmmakers write on their website.

Punitive practices and policies in schools fuel systemic inequities and result in negative outcomes based on race and gender. They have profound consequences for Black girls: rather than promote safety and well-being, these practices disproportionately push Black girls out of school and further into the margins.

“Pushout,” is being screened in several cities. For more information, or to host a screening, visit www.pushoutfilm.com.