Home National Q&A: Danny Glover weighs in on activism in the age of Trump 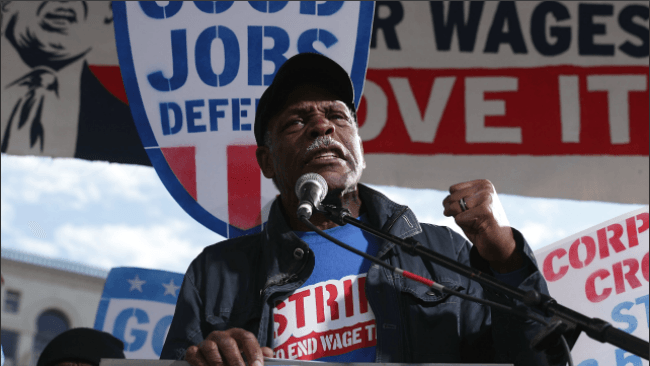 Legendary actor Danny Glover (The Color Purple, Almost Christmas) has built a reputation for his powerful on-screen performances and activism around issues of social justice.

At 70 years old, his longest-running fight has focused on labor unions, speaking on behalf of workers from the hotel industry to car factories. This month Glover, Senator Bernie Sanders and NAACP President Cornell Brooks, traveled to Canton, Mississippi for a pro-union rally at Nissan Motor Company.

While protesting, Glover spoke with theGrio about this inspiration behind his work and what he thinks protest in the era of Trump, should really look like.

TG: Where does your particular passion for labor organizing come to play? How is it connected to civil rights for you?

DG: I think it’s always had a connection. Martin Luther King said once that the best anti-poverty program he knows is the union.

I come from a strong community of labor activism. Where’s it’s my own family or in San Francisco.

TG: You’ve been speaking out about the issues of workers for some time. What is the significance of your protest against car companies and why should African-Americans take notice?

DG: There’s several levels we can look at this. Eighty percent of the workforce (at Nissan plant in Canton) are African-Americans.

And we could tie that to the history of Mississippi issues around the suppression of workers. We can talk about beginning from slavery to Jim Crow and on through that. The attempt to crush labor unions.

Secondly, Nissan, an international company, markets primarily to urban youth. It’s No. 1 model it sells to young people is the Altima. So it markets to young black urban youth and at the same time is suppressing workers.

Also Nissan has 45 plants in the world. Everywhere in the world from Brazil to Japan… Mexico… and only three of those plants do not have representation. Where are those three plants? In MS in TN. The question is why?

Actor Danny Glover (R) speaks during a rally “to fight-back against the Republican war on the working class” February 16, 2017 at Upper Senate Park on Capitol Hill in Washington, DC. (Getty Images)

TG: You once said Trump would be disastrous for America.  So here we are. He’s in office and he’s promising to bring back jobs.  What should progressives should do organize now that he’s in office?

DG: If you’re talking about fair pay, rebuilding the middle class and looking out for workers. the communities that were hit hardest and who voted for him, by industrialization or globalization of whatever you want to call it, or deindustrialization, were places in small towns, places in the south, midwest, northeast- those are the ones who came and supported him and voted for him.

And we talk about everybody could be labeled a progressive. It becomes an oxymoron.  What do we mean by real change?

Dr. King talked about the need for us to have a moral revolution. He talked about building another community, another sense of ourselves as citizens. How do we become citizens in the face of this challenge? That is important. How do we create the America that we want to envision? The america that fights for the rights of women, LGBTQ, workers, immigrants, all of us, those who are being discriminated against, how do we become all of that?

TG: In your experience from seeing apartheid to labor work to civil rights, what would you say to the younger generation of Black Lives Matter activists who are now trying to figure out how to keep that energy to move forward?

DG: I think they are remarkable. Color of Change. Dream Defenders. Black Lives Matter. All the various groups that formed. Sankofa, which I’m apart of, that’s trying to connect artists with movements. The great Paul Robeson once said, “Each generation makes it’s own history.  How they’re judged is by the history they make.”

My generation has made their history. The previous generations that were involved with the civil rights movement and have continued to make their contributions.

So what are we changing, when a society that King talked about and was concerned about becomes more about things than who we are as human beings? How do we reshape this image of ourself? Because one thing that’s gonna trump all that we talked about somewhere down the line, is global warming and climate change.

What are talking about in terms of war and conflict, materialism, racism- the center of it is racism. Whether that’s racism that found its way in colonialism, slavery or racism now.