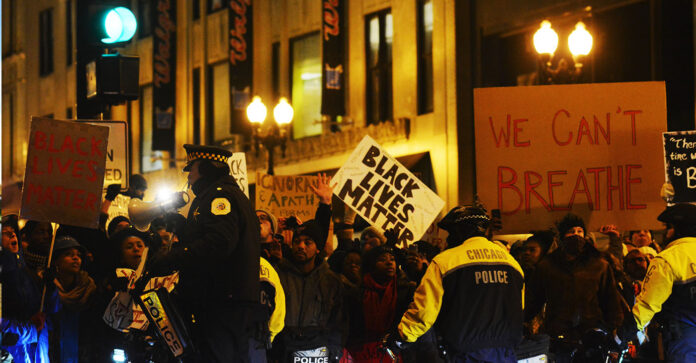 In the wake of the police killing of George Floyd, the hip-hop community has rallied behind proposed new legislation to reform American policing.

Def Jam Founder Russell Simmons has led a coalition of others in the rap world in praising a proposal released on Monday, June 8, by Congressional and Senate Democrats, while also pushing their own agenda.

“We must have police accountability,” Simmons stated. “I have been fighting police brutality for 30 plus years since ‘F the police,’ and it’s the same issue over and over.”

A major part of the hip-hop community’s proposal is that independent prosecutors should immediately be brought in when police officers are charged with a crime – particularly a brutality or murder claim.

Simmons, who said he has the support of Snoop Dogg and others, noted that there are still some in hip-hop who haven’t yet gotten behind the proposal because they’d like to see even tougher language added to the document that’s circulating throughout the industry.

“We need prosecutors who are not beholden to the police unions to indict, prosecute and convict dirty cops,” Simmons stated. “There needs to be a recognition and prosecution of officers as co-conspirators who stand by as crimes are perpetuated. There needs to be a system and legal process where police are responsible for the errors of their partners, after all, they are accomplices to the crimes that they allow their partners to commit.”

Part of the proposal includes an officer’s loss of retirement and pension benefits when convicted of a crime, along with “use of force” training and sensitivity training.

“The murder of George Floyd and the video seen around the nation is one more painful reminder of racism, danger to Black Americans posed by police violence, and the failure of our society’s collective attempt to address inequality and injustice,” Congresswoman Eddie Bernice Johnson (D-Texas), told Black Press USA in an email.

“We need federal reforms to improve police training and practices, and to ensure transparency and accountability,” Johnson wrote.

Congressman Donald McEachin (D-Va.), the Congressional Black Caucus (CBC) Whip on police reform legislation, said the past few weeks have laid bare to the nation just how far America has to go in addressing the deeply-rooted ills of racial bias and police-sanctioned violence in society.

“We can and must reimagine public safety in America to make our policing systems safer for citizens and hold police officers accountable to the communities they serve, beginning with ensuring that the common sense policies included in the Justice in Policing Act (announced Monday by Democrats) are adopted by police departments across our country,” McEachin stated.

CBC Chair Karen Bass (D-Calif.) proclaimed that the nation is witnessing the birth of a new movement with thousands coming together in every state, marching to demand a change that ends police brutality, holds police officers accountable, and calls for transparency.

“For over 100 years, Black communities in America have sadly been marching against police abuse and calling for the police to protect and serve them as they do others,” Bass said.

“Never again should the world be subjected to witnessing what we saw on the streets in Minnesota with George Floyd.”

“Remember the words of Audre Lorde, who said, ‘revolution is not a one-time event. It is becoming always vigilant for the smallest opportunities to make genuine change in established, outgrown responses, for instance, it is learning to address each other’s difference with respect,’” Simmons stated.

“Today, I’m getting support from multiple congress men and women and hip hop’s most powerful voices. I want prosecutors separate from and free from police control. I want it to be that every time a policeman is reported for any misconduct, the case would go to a different independent prosecutors office.”

Fact Check: Can I Still Spread the Coronavirus After I’m Vaccinated?