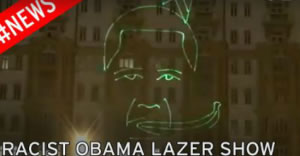 Relations between the United States and Russia are worse than they’ve been in a long time, but Russian students are accused of taking their animosity too far with a racist laser show.

The Mirror reports that students in Russia projected an image of President Obama eating a banana in honor of the president’s birthday, which recently passed.

Pres. Obama was displayed as a monkey mouthed man chewing a banana.

A group called the Moscow Student Initiative claimed responsibility for the laser show after it was posted on YouTube.

“Laser show at the US Embassy in Moscow as a gift to Barack Obama,” it stated.

This is not the first time a Russian official has been accused of racism over a picture of President Obama and a banana.

In 2013, Irina Rodnina, an MP from Putin’s United Russia party, posted a Twitter picture of Obama, the first lady, and a banana.

The U.S. ambassador to Russia called it “outrageous behavior, which only brings shame to her parliament and country.”

Russia has seen an upsurge in white supremacist organizations and is riddled with racism. Soccer players in the country are routinely mocked with bananas.

Rodnina never apologized for the banana tweet and instead blamed criticism of her picture on an imagined conspiracy.

People in the Russian press also took Rodnina’s side.

“What Irina Konstantinovna put on Twitter is her business; it is her own personal space,” wrote Russian news announcer Vladimir Soloviev, according to The Guardian. “This is not a big scandal.”