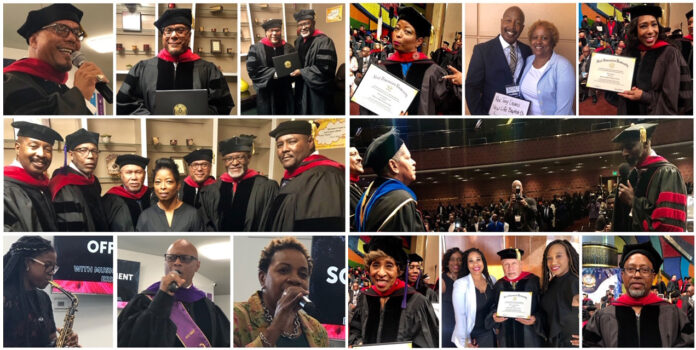 The festivities featured seven San Diegans who received honorary doctorates Saturday, August 17, 2019 from Next Dimension University, during the official commencement exercises at the West Angeles Cathedral in Los Angeles. NDU is a Black-owned Bible college located in Rancho Cucamonga, California.

Former Smooth Jazz 98.1 KIFM Jazzspel host, Dr. Eric J. Chambers, the vice-chair of NDU’s honorary doctoral nominating committee, produced the historic celebration and is responsible for six of the seven San Diegans honored. He was conferred an honorary doctorate in 2013 and is usually given the task of recruiting and delivering such high profile people like Dr. Yolanda Adams, Dr. Fred Hammond, Dr. Randall Cunningham and Dr. Vanessa Bell Armstrong in past years. And this year, gospel great Dr. Kurt Carr, actress Dr. Dawnn Lewis, Hewett and Brown Clark are among his nominees.

“The Lord impressed upon my heart to do something different in 2019,” he said from New Life Baptist Church. “Like Harriet Tubman, I decided to go back and get some of my own people from San Diego and have them conferred. Each of them have a stellar body of work. There is plenty of room at the cross for others who are making a powerful difference in society,” said Chambers.

According to Chambers, all the recipientsl were amazed and shocked to some degree. “I am humbled and honored,” said Dr. Howard. “After 47 years in broadcasting, I never thought this would happen. For Dr. Eric J, my former KIFM colleague, to think enough of me for such an honor is overwhelming.”

And Dr. Baltrip, who first met Dr. Chambers in the mid-80s as founder of the Voices of Fulfillment, was equally surprised. “Man! I don’t know what to say!” he exclaimed when he initially received the call. “I really appreciate you considering me and putting my name in nomination in such a time as this,” he said with excitement. The same sentiments came from each recipient. All were blessed and honored to have their names submitted for conferment.

“We are stomping out Biblical illiteracy—globally, and our commencement exercise is a way to recruit people to our Bible university and prepare them to become master teachers, confronting the evils of the world—with the Word,” said Dr. Joel McLeod, the chancellor and founder.

His message to the honorees and graduates is, “You’ll look back. You’ll come back. And you’ll give back to your alma mater.” It is a reminder that NDU wants each graduate to stay connected and support the university just as alumni continues to give back to such institutions as SDSU, UCSD, UCLA or USC.

While Brown Clark and the other honorees received their degrees on Saturday, Hewett picked up his honorary doctorate during Sunday’s service in Spring Valley because he was booked in concert on the East Coast the night of the graduation. “I’m excited to join my fellow honorary doctoral graduates,” he said. “This is an amazing achievement in my life and I take it seriously.”

For more information about the Bible university, visit NextDimensionUniversity.com.