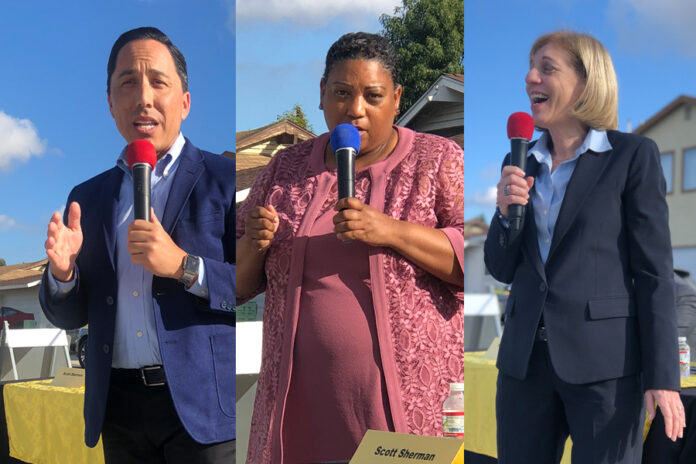 A gathering of community members and leaders collected on the Martin Luther King Jr. Promenade January 11th for what would be an afternoon of San Diego’s Mayoral candidates Councilmember Scott Sherman, activist Tasha Williamson, Assemblymember Todd Gloria, and Councilmember Barbara Bry answering the community’s concerns and inquiries. The candidates were also challenged with questions relevant to not only the surrounding communities, but San Diego as a whole.

With Pastor Miller and Rev. Ulysses Downing both opening the forum and introducing the candidates, Brother Robert Robinson introduced himself to those ushering in to take their seats. Although the weather wasn’t as favorable for an outside forum for questions from community members, they braved the wind and gray skies for the day.

Once the floor was readied with opening statements from the candidates—immediately touching on housing crisis, police reform, policies, and small businesses—the specific forum questions began. Williamson, during her opening statement, brought into the forefront the recent passing of Ernest Buchanan at an Alpha Project event, showing that she is willing to continue the hard work in the communities that are underserved in San Diego with her experience in community activism, but as a mayor with roots in the community.

The topics that seemed to be the most pertinent to community members and leaders of this forum were indeed housing, homelessness, and a living wage. In regards to how to battle homelessness, all candidates discussed giving people a living wage. In California, a living wage would have to be substantial, especially due to the cost of living, which Gloria, Williamson, and Bry understood with Gloria mentioning his role with the Earned Sick Pay and Minimum Wage Ordinance passing.

“I’m proud to say that I had a hand in passing this into law,” Gloria said.

Williamson took it a step further, introducing the solution of permanent housing first. She used Texas and Kansas as examples, noting how those states managed to assist homeless citizens with housing that they can reside in, receive counseling in, and that allowed them to get back on their feet.

“Data shows that when you put people in housing, put them into a community, and give them what they need, they’re able to lift themselves up and out of poverty,” Williamson stated.

Although Bry, Gloria, and Sherman have experience in the political realm here in San Diego, activist Williamson brought passion into every reply from a human standpoint, something that was indescribably palpable. Solutions with policing included reforming policies as well as bringing police into the community they serve and “assisting officers with housing to stay in San Diego,” as suggested by Bry. As for education for our children, Williamson mentioned Black Minds Matter, a program that readies African-American students for college and assists them with college funds.

With closing statements, the candidates appealed to those in the forum’s human sense of being, feigning relatability. Primary voting for San Diego mayor will be taking place March 3, 2020.