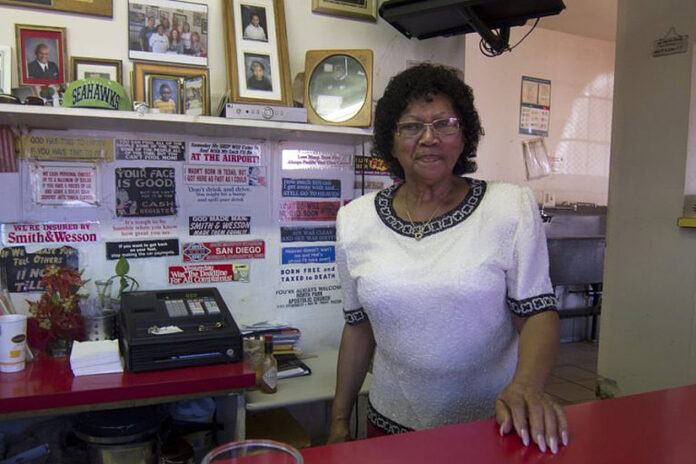 Her real name was Mrs. Barbara Harris. She was known throughout San Diego County for her “soul food” cooking and the cafe she maintained for 50 years on Imperial Avenue in the City of San Diego. Her business came into its own as a result of the person and skills of this soulful cook who mixed love and service with every plate. She also came at a time when Imperial Avenue was a hub for black businesses. There were stores, a dry cleaner and, of course, Mr. Sidney Cooper who, with his produce and presence, became known as the “Mayor of Imperial Avenue.”

The two of them were a force that all knew and talked with. Sister Pee Wee’s was not just soul food, but conversation and a meeting place that all roads lead back to, regardless of how important some neighborhood blacks became.

She was born Barbara Jean Harris in Bradley, Arkansas on March 5, 1935, one of ten children. She settled in San Diego in 1953. Here she changed jobs from the field hand she had been in Fresno to returning to school and finding an occupation in nursing. Her small statue and powerful singing voice reportedly earned her the name “Sister Pee Wee” at the Israelite COGIC Church to which she belonged.

Sister Pee Wee received a number of awards and recognition for her business longevity, service and great food. Among them were the “Unsung Hero Award” from the San Diego Voice & Viewpoint Newspaper for her years of service to others; the Mayor and City Council of San Diego declared October 28, 2017 Sister Pee Wee Day, and she was given the “Good Neighbor Award” by the Larry Himmel Foundation. She is survived by 8 children, 15 grandchildren, great grandchildren and a city that loved her.

Her viewing will be Friday, November 29th at the Pilgrim Progressive Baptist Church from 10am until 11am, followed by services at 11am and interment at Mt. Hope Cemetery with services conducted by Anderson-Ragsdale Mortuary.