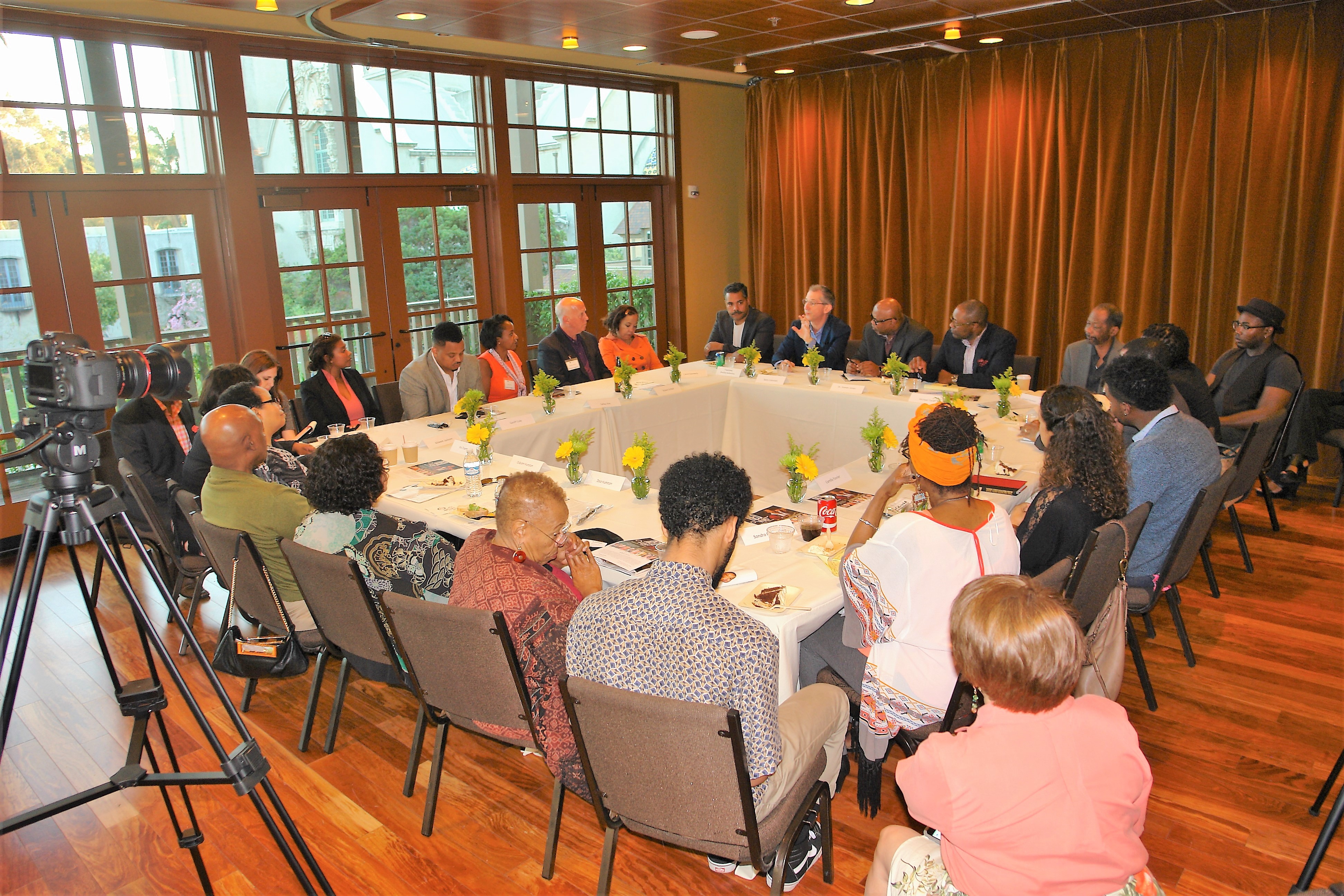 As a movement promoting Black cultural and economic empowerment through strategic visibility and access within San Diego’s institutions, businesses, and public spaces, SDBR has joined efforts with the Old Globe’s Department of Arts Engagement in its mission to “make theatre matter to more people.” This second installment of SDBR’s community engagement series dedicated to strengthening the relationship between San Diego’s Black community and the Old Globe, and to advancing diversity, equity, and inclusion in San Diego’s cultural sector, revisited and deepened the conversations that first took place during SDBR’s “Royal Afternoon Tea with the Old Globe,” which was held at the Westgate Hotel on Dec. 3, 2016.

According to SDBR Founder, Michael Taylor, Board of Directors, The Old Globe, and President, NWB Environmental Services, LLC, “Many cultural institutions reach out to underrepresented groups once or twice a year, but the Globe is unique in its centralized and consistent focus on community engagement.” He added, “The diverse group of leaders invited here today share a nuanced understanding of the indispensable value diversity and inclusion brings to the theatrical arts, as well as the complex challenges nonprofit theaters face in making these important changes. This event aimed to translate talk into action by challenging participants to consider creative and practical strategies for getting more people of color into the spotlight, behind the scenes, into the boardrooms, and into the audience.”

Mr. Taylor’s efforts have captured the attention and support of numerous high-profile community leaders, including Dr. Jones and Mayor Vasquez. Mayor Vasquez shared, “I’m thrilled to be a part of this collaborative effort to make San Diego’s vibrant arts sector more inclusive and accessible through relationship building and open dialogue.”

In co-facilitating this salient dialogue, Erna Finci Viterbi Artistic Director Barry Edelstein shared insights about the Globe’s commitment to engaging all San Diegans at every level of the institution. “Our partnership with San Diego Black Renaissance continues to deepen as we work together to advance our shared values,” said Edelstein. “The Old Globe believes that theater matters, and as a public institution, we embrace our obligation to help make theater matter to as wide a swath of San Diego as possible. That means engaging with diverse populations throughout our metropolis, and prioritizing the inclusion of artists, craftspeople, philanthropists, and professionals of color in all our work. I’m grateful to michael taylor for his visionary leadership in this and many other areas, and for his passionate support of SDBR, the Globe, and the idea of a truly inclusive cultural sector in our great city.”

About Michael Taylor: Michael Taylor is an archaeologist and President of NWB Environmental Services, LLC, a cultural resource management firm specializing in an array of archaeological services. Mr. Taylor is a veteran of the United States Marine Corps infantry, and a graduate of San Diego City College and Columbia University in the City of New York. He serves on the Board of Directors at The Old Globe, on the Board of Trustees for the San Diego Archaeological Center, and as a Commission Advisory Panelist for the City of San Diego Commission for Arts and Culture. Mr. Taylor is also the founder of the San Diego Black Renaissance, a new movement dedicated to empowering San Diego’s Black community through strategic visibility and access. He writes a theater column for the San Diego Voice & Viewpoint called “Michael Taylor Theatre corner.”

About Barry Edelstein (Erna Finci Viterbi Artistic Director) is a stage director, producer, author, and educator. Widely recognized as one of the leading American authorities on the works of Shakespeare, he has directed nearly half of the Bard’s plays. His Globe directing credits include The Winter’s Tale; Othello; the West Coast premiere of novelist Nathan Englander’s play The Twenty-seventh Man; and the world premiere of Michael John LaChiusa and Sybille Pearson’s musical Rain. He also directed All’s Well That Ends Well as the inaugural production of Globe for All, a new producing platform that tours the works of Shakespeare to diverse communities throughout San Diego County. As Director of the Shakespeare Initiative at The Public Theater (2008-2012), Mr. Edelstein oversaw all of the company’s Shakespearean productions, as well as its extensive educational, community outreach, and artist-training programs. At The Public, he staged the world premiere of The Twenty-seventh Man, Julius Caesar, The Merchant of Venice, Timon of Athens, and Steve Martin’s WASP and Other Plays. He was also Associate Producer of The Public’s Broadway production of The Merchant of Venice starring Al Pacino. From 1998-2003 he was Artistic Director of Classic Stage Company. Mr. Edelstein’s other Shakespearean directorial credits include The Winter’s Tale at Classic Stage Company; As You Like It starring Gwyneth Paltrow; and Richard III starring John Turturro. Additional credits include the Lucille Lortel Award-winning revival of Arthur Miller’s All My Sons; the world premiere of Steve Martin’s The Underpants, which he commissioned; and Molière’s The Misanthrope starring Uma Thurman in her stage debut. Mr. Edelstein has taught Shakespearean acting at The Juilliard School, NYU’s Graduate Acting Program, and the University of Southern California. His book Thinking Shakespeare is the standard text on American Shakespearean acting. He is also the author of Bardisms: Shakespeare for All Occasions.

About Dr. Steven Jones: Dr. Steven Jones is an author, speaker and national expert on diversity, inclusion, change management and leadership development. He is President & CEO of the Central San Diego Black Chamber of Commerce and CEO of JONES, a San Diego based firm that specializes in diversity and organizational effectiveness consulting. Dr. Jones is currently in the process of completing his second book entitled, Cultural Competency: Leading through New Lenses in the 21st Century. He holds a B.S. in Computer Science, a M.Ed. in Multicultural Counseling, and a Ph.D. in Industrial/ Organizational Psychology. Dr. Jones serves as a National Diversity Advisor to Honda, Hyundai, and Sempra Energy. In addition, he brings over 23 years of experience working with K-12 schools, universities, community organizations, and Fortune 500 corporations. Dr. Jones is sought after by leaders who seek to make real change that prepares their organizations to effectively step into the 21st Century.

About The Old Globe: The Tony Award-winning Old Globe is one of the country’s leading professional regional theatres and has stood as San Diego’s flagship arts institution for over 80 years. Under the leadership of Erna Finci Viterbi Artistic Director Barry Edelstein, The Old Globe produces a year-round season of 15 productions of classic, contemporary, and new works on its three Balboa Park stages: the Donald and Darlene Shiley Stage in the 600-seat Old Globe Theatre and the 250-seat Sheryl and Harvey White Theatre, both part of The Old Globe’s Conrad Prebys Theatre Center, and the 605-seat outdoor Lowell Davies Festival Theatre, home of its internationally renowned Shakespeare Festival. More than 250,000 people attend Globe productions annually and participate in the theatre’s education and community programs. Numerous world premieres such as the 2014 Tony Award winner for Best Musical, A Gentleman’s Guide to Love and Murder, Bright Star, Allegiance, The Full Monty, Dirty Rotten Scoundrels, and the annual holiday musical Dr. Seuss’ How the Grinch Stole Christmas! have been developed at The Old Globe and have gone on to enjoy highly successful runs on Broadway and at regional theatres across the country.

About The Old Globe Department of Arts Engagement: The mission of Arts Engagement at The Old Globe is to make theatre matter to more people and to strengthen the connections between our neighbors and our institution. The Globe’s Department of Arts Engagement was created to share with individuals and families a chance to experience theatre, perhaps even for the first time. Our work opens new doors to creativity through theatre-based activities that encourage direct participation in art-making and that engage San Diegans with every level of the institution. The Arts Engagement team strives to make the Globe truly accessible to its neighbors through a combination of new and existing programs that are innovative, participatory, and multigenerational. Arts Engagement creates new bonds of community and deepens existing ones.