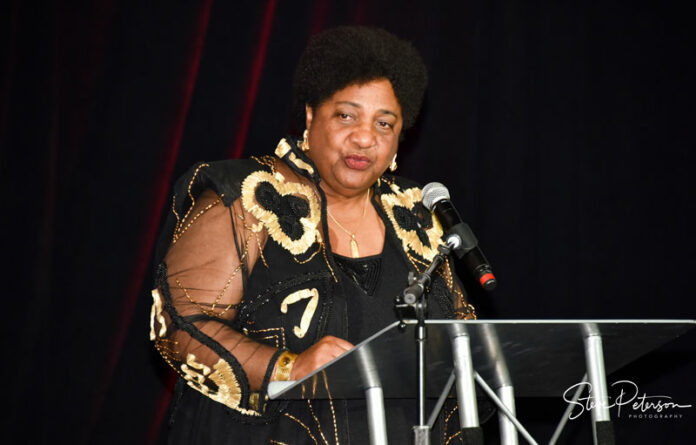 At the Jacobs Center Celebration Hall on May 17, 2019 the SDSU African American Alumni Chapter (AAAC) unified to not only celebrate the 40th anniversary of the SDSU Black Baccalaureate, but to honor community leaders and raise scholarship funds for black students.  The AAAC is emerging to support, advocate for, encourage and mentor black San Diego State University students.  With the recent vandalism of the SDSU Black Resource Center and bold racial slurs against students of color, the SDSU AAAC steps up in a big way to advocate for equal opportunities for black students. 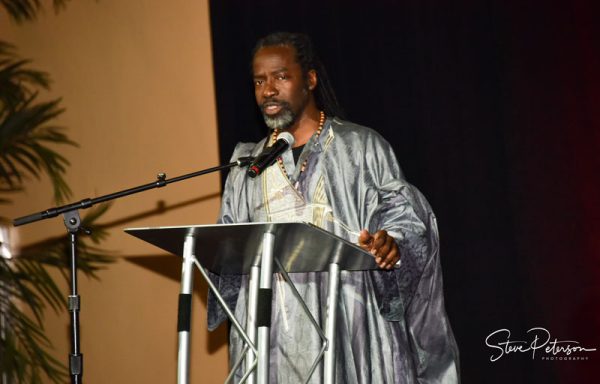 It was a night to remember. The Alumni Master of Ceremonies Dr. Daniel E. Walker and the Honorable Dina Walker graced the grand gala with SDSU pride, elegance, laughter and love. The distinguished former SDSU students were not shy in praising the Africana Studies Department and faculty for their success.  Daniel E. Walker is a world renowned speaker, college professor and founder of the Long Beach Indie International Film Festival (Ibifest.com). The Honorable Dina Walker, taking after her mentor Assemblymember Dr. Shirley Weber, is a member of the Rialto Unified Board of Education in California.

The room was electrifying with performances from Impact Dance and Music Ensemble, an alum-directed company out of Los Angeles, California.  Sheryl “Imani” Harris (Alum), founder of the dynamic ensemble, plans to bring more of the arts to the city that she accredits to starting her career path in the arts.  Alum Nancy Tentman-Brown, also known as Misty Brown, brought the house down with a heartfelt song dedicated to Assemblymember Dr. Weber.  Current SDSU student, Ronald Williams, expressed some of the challenges of his generation through a powerful poetic expression that brought the audience to their feet.

To say the least, the entertainment was outstanding but did not outshine the unity, love and commitment to raising scholarship funds for students and making moves to better the educational experience for current and future black students at San Diego State University. Alum Kenny Rose, now known as Jahi Awakoaiye, who earned a B.S. in Electrical Engineering at San Diego State University and minored in Africana Studies and Economics, was honored for his sacrifice to uplifting the African American community in Oakland, California.  He is the Director of Ile Omode School where he pours in all he has been given and learned to future leaders.  Jahi Awakoaiye, clothed in kingly attire, addressed his colleagues and current SDSU students with a word of hope and endless possibilities. 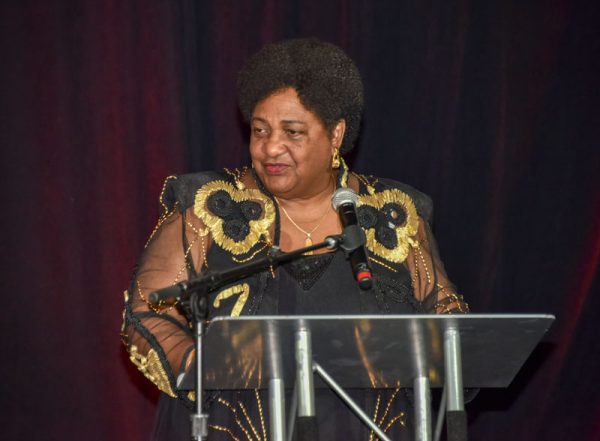 Current SDSU black students, who recently had their confidence shaken by recent vandalism to the one place set aside to support their academic success, was surrounded by black excellence cultivated from relationships formed at San Diego State University.  The evening concluded with Assemblymember Dr. Shirley N. Weber being awarded by SDSU AAAC and San Diego State University.  Assemblymember Weber received proclamations from the City of San Diego and the City of Chula Vista.  The icing was on the cake and Assemblymember Dr. Shirley N. Weber put the cherry on top with a riveting speech that had her previous students, current SDSU students, family and friends on the edge of their seats.  It’s the roots of Dr. Shirley Weber’s courage, fight, passion and example that gave hope to so many of her branches that will and have already become life producing trees.

The SDSU African American Alumni Chapter Scholarship Gala proudly achieved its goal of raising funds to support the education of black students at SDSU.  The SDSU AAAC would like to thank the residents of San Diego who actively support the students and alumni of San Diego State University; Mandate Records and GodRadio1.com for supporting the event; the black students for choosing to attend SDSU and be part of a rich legacy; the honorees for their selfless service; and San Diego State faculty and staff for their support in making this event a success.  If you are a black SDSU alumni, and would like to join this honorable cause they can be reached at AAACsdsuAlumni@gmail.com.