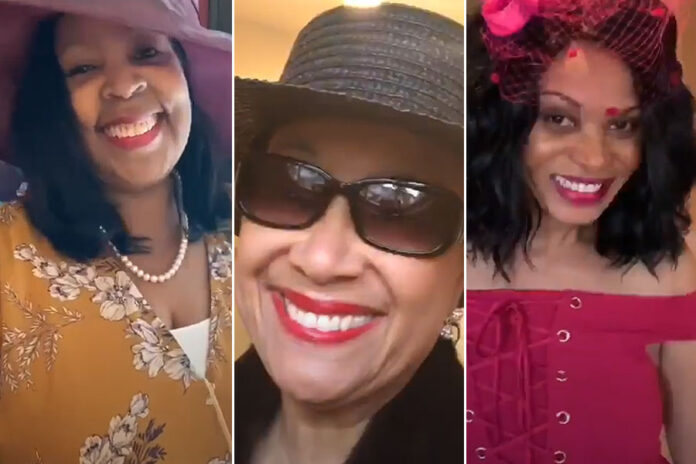 Technology is providing virtual meeting spaces and the capability for people to have fun, be resourceful and send common-sense messages to each other — and the world beyond — while we practice physical separation during California’s COVID-19 stay-at-home order.

Each of the women recorded a personal mobile video showing what they would wear to church if they attended in person. Then, one woman’s daughters mashed up the clips for a compilation video that they shared on social media outlets, including Facebook.

Phyllis Marshall, the Chief Legislative Representative at the Los Angeles County Board of Supervisors, led on the creation of the video montage set to the Staple Singers classic hit “I’ll Take You there.”

(In the version of the video we reference here, the audio track in the video was replaced with the song “Ooooo” by Bryan Cook)

And, yes, the women took it there.

“We just all decided why don’t we do something, dress up, show people they can still have a good time, and still worship the Lord,” Marshall said. “I just thought that you don’t have to give everything up because you have to stay inside. It’s just a way to get the message out about social distancing, doing our part, and still having fun.”

Marshall said her sister, Cynthia Marshall, the Chief Executive Officer of the NBA’s Dallas Mavericks, is one of the participants in the video.

Linda White, Senior Manager for Government and External Affairs at the luxury carmaker BMW, also recorded a clip for the video.

White said she received clear directions from Marshall on how to shoot her video. She then enlisted the help of her daughter, Sydney White, who helped her chose an outfit for the production.

“I had no idea who else would be in the final cut,” White said. “That was the exciting part: waiting for the final version. It was a nice bonding moment for me and my daughter to just laugh out loud. That was another great benefit of doing the shoot in light of COVID-19.”

Besides Marshall and White, the other women in the video are Robbin Lewis-Coaxum, former Chief of Staff at the California Assembly; Beryl Potter, an attorney and trustee at the Museum of the African Diaspora in San Francisco; Pamela Gibbs, Director of Governmental Relations for the Los Angeles County Office of Education; Cheryl Reede, Workforce Career Assessment Supervisor, Sacramento County; Thelma Harris, Chief of Legislation for the Board of Board of Registered Nurses in Sacramento; and Gisele Bonds, a businesswoman, photographer and digital media professional.

“All we had to do was to go into the bathroom, make two separate videos, then we sent them to her,” Marshall said, describing the instructions her daughter gave her. “She’s the millennial. We didn’t know anything about this type of technology. She told us exactly what to do. It actually helped us learn something new.”

Marshall shared the video on Facebook Saturday morning where it had caught the attention of more than a thousand viewers by midnight on Easter Sunday. After viewing it, family, friends and newfound fans — even some church ministers they know — asked them for tips on how to create their own videos.

The video montage may have been spontaneous, but it did not happen totally by coincidence. The women it features, all powerful in their own right, know each other well. All of them are part of the Traveling Divas Book Club and have been keeping in touch online via Zoom since they’ve had to cancel planned activities like a group trip to Bodega Bay in Sonoma County.