Home National Shooting Death in Georgia of Ahmaud Arbery is Defined as a “Modern... 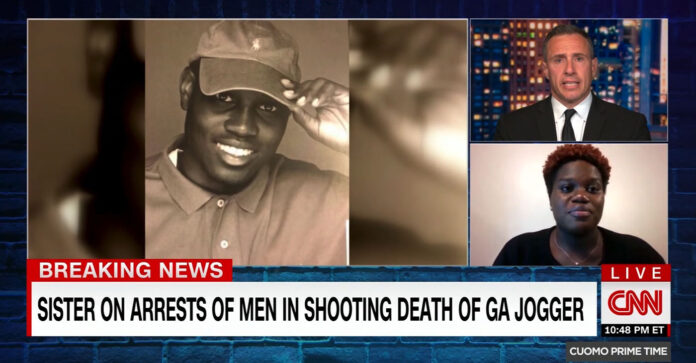 The shooting death of Ahmaud Arbery, 25, went viral on social media on May 6, months after his murder. The video shows Arbery jogging down a street in Brunswick, Georgia. It appears to demonstrate the involvement of three men — two on a pickup truck and another filming the scene from behind.

Months after the U.S. House passed a new lynching law, which has been held up by the Republican led U.S. Senate, and a day after investigative journalist Ida B. Wells was posthumously awarded a Pulitzer Prize — a lynching story dated February 23, 2020 is in the news.

The shooting death of Ahmaud Arbery, 25, went viral on social media on May 6, months after his murder. The video shows Arbery jogging down a street in Brunswick, Georgia. It appears to demonstrate the involvement of three men — two on a pickup truck and another filming the scene from behind.

Arbery’s death took place on February 23rd about three miles from where he lived. Arbery was an avid jogger and played football.

The two men on the pickup truck have been identified through numerous media reports as Greg McMichael, a retired investigator in the Brunswick District Attorney’s office, and his son Travis McMichael. They appear to follow Arbery from behind as he is jogging down a suburban street. Travis McMichael, the alleged shooter, is seen confronting Arbery and part of a struggle ensues in and outside of the camera’s range.  The sound of shotgun fire is heard. Arbery is then seen on video collapsing after the sound of the gunshot in front of the truck.

Brunswick District Attorney Jackie Johnson recused herself because one of the men seen in the video of the fatal shooting pointing a gun at Arbery worked in the district attorney’s office.

During an exclusive interview on Roland Martin Unfiltered on May 7th with Arbery’s mother, Wanda Cooper-Jones confirmed there was no support of her from anyone in the small Georgia community after her son died. That is changing.  Since the viral video has been widely seen everyone from LeBron James to former Vice President Biden and President Trump has commented on Arbery’s death.

“Initially I was told there was a burglary and a struggle over a firearm,” Cooper-Jones said on Roland Martin Unfiltered. She confirmed she has not watched the video of her son’s death but the description of it from others did not line up with what authorities told her after her son died.

“I need to get these men indicted. They need to go to jail. Two months has been too long,” said Jones on Martin’s show answering a question from Dr. Gregg Carr, the Chairman of the African American Studies Department at Howard University.

Late on May 7, Greg and Travis McMichael were finally arrested. Many observers of the breaking news warned that the exotic charges and where any future court case is likely to take place matters.

The Congressional Black Caucus had demanded arrests the day before and released a statement that in part read, “the killing of Ahmaud Arbery shows us that the spirit of lynching is still alive and well in our nation and something that we cannot tolerate.”

“The scary thing for me is the they thought the video would help his client. The culture is so backwards down there they actually thought that,” said Arbery family attorney Lee Merritt on Roland Martin Unfiltered. The case has widely been compared to the 2012 murder of Trayvon Martin in Florida by George Zimmerman.

“What happened to #AhmaudArbery is a MODERN DAY LYNCHING. This February, the House overwhelmingly passed the Emmett Till Antilynching Act, which would make lynching a federal crime,” wrote Rep. Bobby Rush (D-IL)

South Carolina Republican U.S. Senator Tim Scott wrote, “ Every.single.time. The excuses pour in – ‘he looked suspicious’… ‘we thought he was committing a crime”…The fact remains, #AhmaudArbery was hunted down from a pickup truck and murdered in cold blood. My heart breaks for his family, and justice must be served.”

Likely Democratic presidential nominee Joe Biden said, Arbery was “shot down in cold blood,” and his killing reflected a “rising pandemic of hate.”

“AhmaudArbery should still be alive right now. This is tragic and unacceptable. It should ignite us all in demands for justice. I’m calling on the Department of Justice to investigate. We need justice for Ahmaud and his family,” wrote Sen. Cory Booker on twitter.