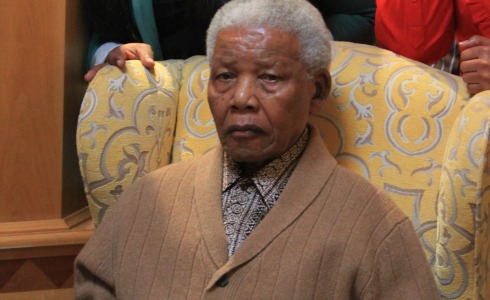 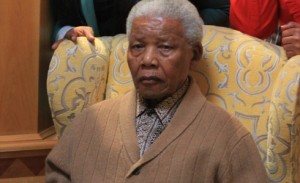 JOHANNESBURG — Nelson Mandela, the anti-apartheid leader who became South Africa’s first black president, has been admitted to a hospital with a recurring lung infection, the presidential spokesman said Thursday.

Mandela, 94, has become increasingly frail in recent years and has been hospitalized several times since last year, most recently earlier this month when he underwent what authorities said was a scheduled medical test. The Nobel laureate is a revered figure in South Africa, which has honored his legacy of reconciliation by naming buildings and other places after him and printing his image on national banknotes.

“I’m so sorry. I’m sad,” said Obed Mokwana, a Johannesburg resident. “I just try to pray all the time. He must come very strong again.”

The Nobel laureate was admitted to a hospital just before midnight Wednesday “due to the recurrence of his lung infection,” the office of President Jacob Zuma said in a statement.

“Doctors are attending to him, ensuring that he has the best possible expert medical treatment and comfort,” the statement said. It appealed “for understanding and privacy in order to allow space to the doctors to do their work.”

Presidential spokesman Mac Maharaj said Mandela was in a hospital in the South African capital of Pretoria, but he did not specify which one.

In December, Mandela spent three weeks in a hospital in Pretoria, where he was treated for a lung infection and had a procedure to remove gallstones.

Maharaj acknowledged there was cause for worry, but said the medical specialists treating Mandela were very competent.

“The health has been OK given his age, but the downturn last night — obviously when the lung infection recurs, the doctors will want to do everything possible and make sure that they don’t allow the infection to spread, that they arrest it as quickly as possible,” Maharaj said in an interview with eNCA, a South African news channel.

He said there had been a global outpouring of messages expressing concern for Mandela’s health.

Zuma wished Mandela a speedy recovery, referring to him affectionately by his clan name, “Madiba.”

“We appeal to the people of South Africa and the world to pray for our beloved Madiba and his family and to keep them in their thoughts. We have full confidence in the medical team and know that they will do everything possible to ensure recovery,” the presidential statement quoted Zuma as saying.

Mandela spent a night in a hospital and was released on March 10 following a medical test. At that time, spokesman Maharaj said Mandela was “well.”

In February 2012, Mandela spent a night in a hospital for minor diagnostic surgery to determine the cause of an abdominal complaint. In January 2011, he was admitted to a Johannesburg hospital for what officials initially described as tests but what turned out to be an acute respiratory infection. He was discharged days later.

He also had surgery for an enlarged prostate gland in 1985.

Under South Africa’s white-minority apartheid regime, Mandela served 27 years in prison, where he contracted tuberculosis, before being released in 1990. He later became the nation’s first democratically elected president in 1994 under the banner of the African National Congress, helping to negotiate a relatively peaceful end to apartheid despite fears of much greater bloodshed. He served one five-year term as president before retiring.

Perceived successes during Mandela’s tenure include the introduction of a constitution with robust protections for individual rights and the Truth and Reconciliation Commission, a panel that heard testimony about apartheid-era violations of human rights as a kind of national therapy session. South Africa still struggles with crime, economic inequality and other social ills.

Mandela last made a public appearance on a major stage when South Africa hosted the 2010 World Cup soccer tournament.

He had spent more time in the rural village of Qunu in Eastern Cape province, where he grew up. He was visited there in August by Hillary Clinton, who was U.S. secretary of state at the time.

Doctors said in December that he should remain at his home in the Johannesburg neighborhood of Houghton for the time being to be close to medical facilities that can provide the care he needs.

During Mandela’s previous hospitalizations, the South African government had criticized some media outlets for what it described as rumor-mongering and a failure to respect the privacy of the former leader and his family. The media, in turn, expressed concern about an alleged lack of transparency and occasionally conflicting reports from officials.

Maharaj, the presidential spokesman, told eNCA on Thursday that authorities were mindful of public interest in Mandela’s health, but would allow the medical team to focus on treating the former president.

“Our updates will be dependent always on what the doctors tell us and we are not pressurizing them to give us updates every few hours,” he said. “We think that they should attend to their work. We are confident that they know that if there is an upturn for the good, or for the bad, they will always keep us informed.”