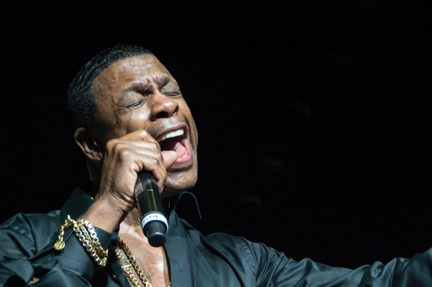 If you were an avid listener of Keith Sweat, H-Town and Guy, then you were in for a treat recently! On Saturday, March 22nd, “Spring Jam 2014,” brought to you by Wildstyle Entertainment and G-Square Event Holding and presented by Magic 92.5, drew thousands to the Valley View Casino, to go back in time to the sounds of the 90s.  Performers also included Jon B. and Dougie Fresh who served as the concert host.  The sultry singers still had the same moves they displayed back in the day, and a lot of the ladies were left with quite an eye full as Keith Sweat gave away some “stage dances,” to swooning female fans.  Aaron Hall and one of the members of H-Town also gave quite a strip tease before the lively crowd.  Jon B., who is currently recording sang many of the crowd’s favorites from his last six albums, and sounded just as he did when he first released in 1997. Also featured was O’Bryan, singer of popular R&B song “You and I.”  “Dougie Fresh was amazing, and the highlight of my evening,” shared concert attendee, Dominique. “I had a good time! It was a little on the raunchy side, but I had a good time,” said Danielle.  “We want to thank San Diego for their support. Over 5000 fans showed up,” shared Marcus Wildstyle, founder of Wildstyle Entertainment.