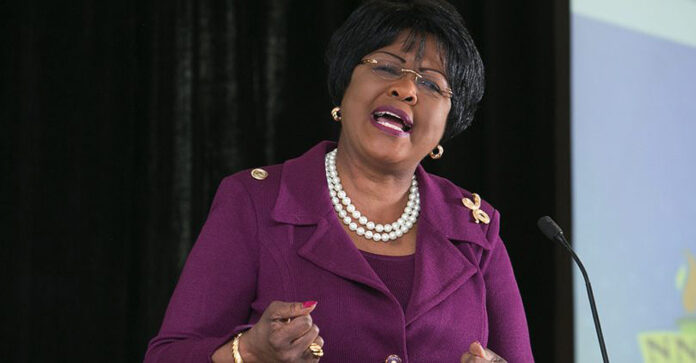 The African Union President’s Office spokeswoman Ebba Kalondo has maintained that Ambassador Chihombori-Quao didn’t lose her job because of France or her fiery speeches about the scramble for Africa. “To say that the termination is due to [those opinions] is plainly false,” Kalondo said. However, no specific reason has been provided for the Ambassador’s termination.

Did African Union Ambassador to the United States Dr. Arikana Chihombori-Quao lose her job because of her outspokenness about France’s continued profiting off of her beloved Africa?

Or, is Her Excellency being shown the door because certain powers are exasperated that she’s exposed another “scramble for Africa?”

It appears that one – if not both – of those reasonings are true despite both French officials and those inside the African Union have either tepidly denied or have remained mum.

“Dr. Arikana Chihombori-Quao shoots straight from the hip on these matters,” Jane Save, a business advocate, wrote on Twitter, where social media users have for weeks expressed their anger over the decision to terminate the Ambassador.

Jerry Rawlings, the former president of Ghana, said the Ambassador’s dismissal raises serious questions about the independence of the AU.

“For someone who spoke her mind about the detrimental effects of colonization and the huge cost of French control in several parts of Africa, this is an act that can best be described as coming from French-controlled colonized-minds,” Rawlings said.

Dr. Leonard Jeffries, a long time Pan-Africanist and former professor of Black Studies at the City University of New York, told The Amsterdam News that he agreed with Rawlings. “She spoke too much truth. That was it. She exposed too much, and it became too real.”

When Jeffries, uncle to U.S. Rep. Hakeem Jeffries, heard the AU was spreading rumors about Ambassador Chihombori-Quao in an attempt to justify the dismissal, he scoffed.

“She’s a woman of integrity who has money in her own right. She’s not stealing money to buy some Gucci bag,” Jeffries said, according to The Amsterdam News.

An online petition seeking to have the Ambassador reinstated has garnered more than 68,000 signatures. Many of the petitioners said they believe her outspokenness about France’s continued profiting from the colonization of Africa led to the termination.

Others said she had called attention to the continued dominance of Africa, and her efforts to unite the continent and Africans throughout the diaspora has ruffled some mighty feathers.

The African Union President’s Office spokeswoman Ebba Kalondo has maintained that Ambassador Chihombori-Quao didn’t lose her job because of France or her fiery speeches about the scramble for Africa.

“To say that the termination is due to [those opinions] is plainly false,” Kalondo said.

However, no specific reason has been provided for the Ambassador’s termination.

AU Commission Chair Moussa Faki Mahamat said only that the Ambassaor was removed from office following the Commission’s rules.

Located in Addis Ababa, the African Union is an organization consisting of 55 African countries. Founded in May 2001 to replace the Organization of African States, one of AU’s stated goals is “to establish the necessary conditions which enable the continent to play its rightful role in the global economy and in international negotiations.”

A Ghanaian native, Ambassador Chihombori-Quao took office in 2017. She served in various capacities at the African Union before being nominated African Union Ambassador to the United States.

After almost a year of persuading her to assume leadership as the African Union Permanent Ambassador in the United States representing the 55 countries of the Union, Dr. Chihombori-Quao accepted the position.

“She has led with courage and vigor in galvanizing peoples of African Descent,” Prof. Apollos Nwauwa, the Secretary of the African Diaspora Congress, stated.

“Dr. Chihombori-Quao has spoken globally to sensitize and empower all peoples of African Descent to come together and build the ‘Africa We Want’ as adopted in African Union Agenda 2063,” Professor Nwauwa noted.

The unification of the African Diaspora as espoused in AU Agenda 2063 is contrary to the Africa that has been marginalized and pillaged through inequitable colonial and post-colonial contracts, Professor Nwauwa continued.

“Dr. Chihombori-Quao has been outspoken about neo-colonial maneuverings and exploitation that still exist today. Her dissemination of the truth has garnered her attention and support around the world,” the professor stated.

“However, not everyone is embracing her bold but honest discourses for effecting change for the betterment of Africa.”