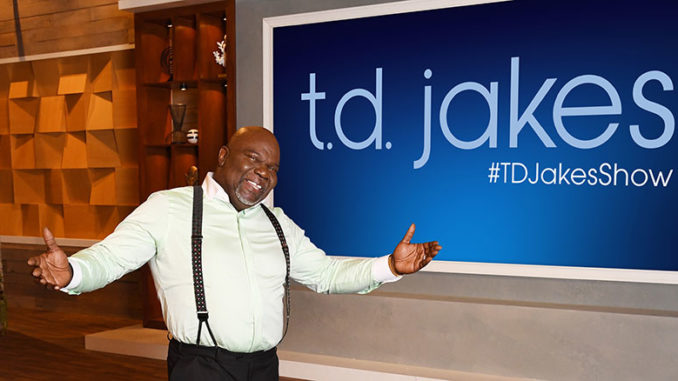 The struggles of an interracial marriage, families divided by race, religion and politics and the conversion of one Jewish woman to Islam are all upcoming segments that will be featured on Bishop T.D. Jakes’ new talk show which premieres on the Oprah Winfrey Network (OWN) on Monday, September 19 and is schedule to air Monday through Friday.

Jakes, one of the most influential pastors in America today, who has written books, music, plays and movies, said that his show could even provide discussion on topics like the Black Lives Matter Movement and controversial subjects like the National Anthem protest by Colin Kaepernick and the rape trial of comedy superstar Bill Cosby.

“When we can get them, we’re not shying away. We will do stories that are in the headlines,” said Jakes, 59, the senior pastor of the Potter’s House in Dallas, Texas and the author of the New York Times’ bestselling books, “Instinct,” and “Destiny.”

“I think there is a great need in our country right now for something that is uplifting and that builds bridges and causes people to rethink themselves,” Jakes said. “Much of what we see on television doesn’t accomplish that. I’m hoping to bring the kind of conversation to America that’s informative and inspirational and still entertaining,” he said.

Because he’s well-known in the pulpit doesn’t mean he’ll be preaching on the talk show, Jakes said, noting that he can reserve sermons for Sundays.

“That’s not all of who I am,” said Jakes. “I’ve seen a lot of things, I’ve met with presidents and interacted with CEOs.”

Jakes continued: “I’ve been to the courtroom and watched a crying mother say goodbye to her son; I’ve been to visit those on death row. I’ve been there when individuals have been disconnected from life-support; I’ve been to drug interventions. This September marks 40 years that I’ve been in the ministry, so this isn’t anything that’s new, only [now] I’ll be in front of the cameras.”

If social media buzz is any indication, the new show will be a hit.

The show’s Twitter handle, @TDJakesShow, had almost 23,000 followers before a single episode had aired. Jakes said that social media will play a big role in his new venture.

“We want people to tweet or go on Facebook to continue the conversation,” he said. “You can’t always solve a problem in the 45 minutes you have on the show and I don’t see this just as a show, but as a network communication device to uplift people. So, after the show is over, you can still go on social media to keep the conversation going.”

Whether it’s Facebook, Twitter or other websites, it’s important to reach those who use social media, the bishop said.

“The stats say that hardly anyone sits in front of a big screen without a little screen in front of them in their hands and I’m guilty of that too,” he said. “Being able to engage in every medium is important and I have a huge respect for the power of social media.”

“The sky is the limit. We’ve been dealing with people whose loved ones have been murdered. We recently did a story about a new trend in the country where husbands stay at home and the women are the primary bread winners,” Jakes said. “We will do stories about online dating, bulimia, interracial marriage and stories that include an African-American who is married to a Jewish woman, a Muslim woman raised in Afghanistan who converted to Christianity and her father almost committed suicide. We are all over the place dealing with what America is dealing with and offering solutions.”

Jakes noted that he’s thrilled to be on OWN.

“Oprah Winfrey is an icon and a business mogul who has become a national treasure. I consider her a personal friend and I’m honored to have her support my new show,” he said.

While individuals from all walks of life and just about every background might tune in, Jakes is certain that African-Americans particularly will openly receive his message.

“The Black community overall gets it. I engage millions of them on social media and they’ve been very supportive by and large,” he said.

Jakes said that he wants people that tune in to watch the show that all of us have an obligation to create a platform for awareness to causes that affect our community.

“Understand this, I am the same person they’ve known for 40 years and I’m not changing my skin, I’m not changing the core issues that have defined me all of my life,” said Jakes. “At the end of the day, if I have broadened the perspective on a situation in daily life, if I have in any way helped to utilize resources [that people] didn’t know were available to them, then I have served my purpose.”

THE BLERDBINDER: Disney Has a Problem with Star Wars

#QuarantineAndChill: Things to Do During the Covid-19 Crisis