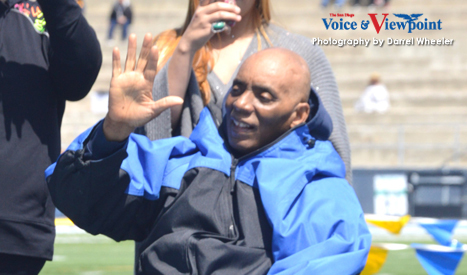 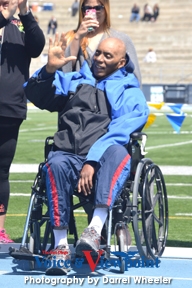 The Morse High grad has been involved in track & field as a participant, meet organizer and coach for five decades. Hopefully some of the athletes at the invitational will have a career as predigest as Mr. Clarence Earl (Arnie) Robinson.

Classmate Douglass Tanab had this to say about the gold medalist, “ I have known Arnie since the mid-sixties when we were both on the Morse High School and Mesa college track teams. I remember him as an outstanding long–high jumper, sprinter, hurdler and basketball player. I was thrilled to see him go to two Olympics and win silver, and four years later win the gold.”

Following his interest in track & field, Arnie took over the head coaching position at Mesa College.

Unfortunately tragedy struck when a drunk driver broadsided his car and left Arnie severely injured. The fact that he continued to coach at Mesa until he retired was truly amazing. Since the accident he has battled with major health issues. In the true sense of the word, Arnie has been a superstar and an inspiration to all.” 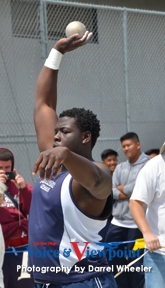 Arnie was wheeled to the all-weather track and treated to a happy birthday song by the fans and athletes at the second annual Arnie Robinson invitational. Madison High School’s Dotun Ogundeji impressed spectators with shot-put skills, and the senior led all challengers with a 62’6.25 toss. He also won the discus throw.

“He is the best thrower in the nation right now. He is a beast, he has the strength and technique and a good coach. He has the ability to be one of the best ever to come out of San Diego,” said Montgomery High’s throwing Coach Brian Johnson.

Like Arnie, maybe one day Dotun will have a Track & Field Invitational named after him for his outstanding accomplishments.