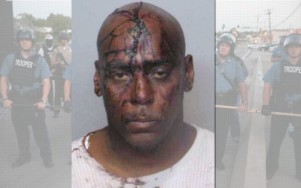 The officers got the wrong man, but charged him anyway—with getting his blood on their uniforms. How the Ferguson PD ran the town where Michael Brown was gunned down.
Police in Ferguson, Missouri, once charged a man with destruction of property for bleeding on their uniforms while four of them allegedly beat him.

“On and/or about the 20th day of Sept. 20, 2009 at or near 222 S. Florissant within the corporate limits of Ferguson, Missouri, the above named defendant did then and there unlawfully commit the offense of ‘property damage’ to wit did transfer blood to the uniform,” reads the charge sheet.

The address is the headquarters of the Ferguson Police Department, where a 52-year-old welder named Henry Davis was taken in the predawn hours on that date. He had been arrested for an outstanding warrant that proved to actually be for another man of the same surname, but a different middle name and Social Security number.

“I said, ‘I told you guys it wasn’t me,’” Davis later testified.

He recalled the booking officer saying, “We have a problem.”

The booking officer had no other reason to hold Davis, who ended up in Ferguson only because he missed the exit for St. Charles and then pulled off the highway because the rain was so heavy he could not see to drive. The cop who had pulled up behind him must have run his license plate and assumed he was that other Henry Davis. Davis said the cop approached his vehicle, grabbed his cellphone from his hand, cuffed him and placed him in the back seat of the patrol car, without a word of explanation.

But the booking officer was not ready just to let Davis go, and proceeded to escort him to a one-man cell that already had a man in it asleep on the lone bunk. Davis says that he asked the officer if he could at least have one of the sleeping mats that were stacked nearby.

”He said I wasn’t getting one,” Davis said.

Davis balked at being a second man in a one-man cell.

“Because it’s 3 in the morning,” he later testified. “Who going to sleep on a cement floor?”

The booking officer summoned a number of fellow cops. One opened the cell door while another suddenly charged, propelling Davis inside and slamming him against the back wall.

“I told the police officers there that I didn’t do nothing, ‘Why is you guys doing this to me?’” Davis testified. “They said, ‘OK, just lay on the ground and put your hands behind your back.’”

Davis said he complied and that a female officer straddled and then handcuffed him. Two other officers crowded into the cell.

“They started hitting me,” he testified. “I was getting hit and I just covered up.”

The other two stepped out and the female officer allegedly lifted Davis’ head as the cop who had initially pushed him into the cell reappeared.

“He ran in and kicked me in the head,” Davis recalled. “I almost passed out at that point… Paramedics came… They said it was too much blood, I had to go to the hospital.”

A patrol car took the bleeding Davis to a nearby emergency room. He refused treatment, demanding somebody first take his picture.

“I wanted a witness and proof of what they done to me,” Davis said.

He was driven back to the jail, where he was held for several days before he posted $1,500 bond on four counts of “property damage.” Police Officer John Beaird had signed complaints swearing on pain of perjury that Davis had bled on his uniform and those of three fellow officers.

The remarkable turned inexplicable when Beaird was deposed in a civil case that Davis subsequently brought seeking redress and recompense.