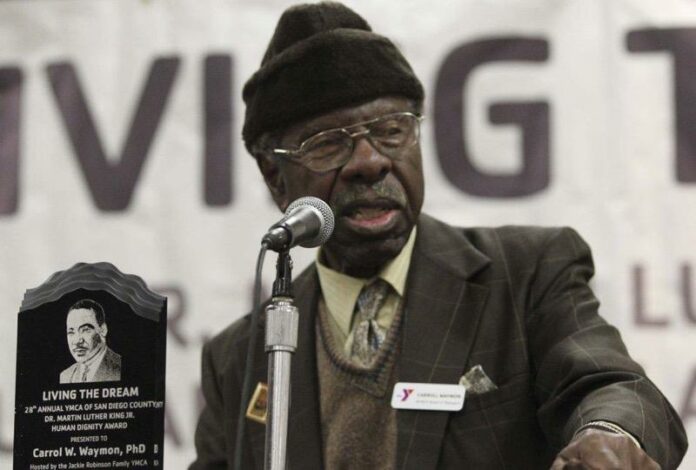 He came to San Diego in 1964. His coming here was in response to a request by the San Diego City Council for help from the Los Angeles Human Relations Agency, an organization Dr. Waymon worked with at the time. He was hired by the City of San Diego as its first Director of the Citizens Interracial Committee (CIC). This was the City’s first human relations agency, charged with convening community dialogues, identifying racial injustice and educating the public about racial tensions in San Diego. The job became a passion and the man became an agent of change in San Diego.

What we know of his early life is that he was the son of a Methodist minister, with seven siblings, including his younger sister, the late Nina Simone, a renowned jazz performer/composer. We know that while in San Diego, he made contributions as an educator, psychologist, sociologist, anthropologist, writer, philosopher and poet. He taught for more than forty years at the high school and college levels. He established the Black Studies Program at San Diego State University, and taught teachers how to teach in inner city schools. He was president of the local chapter of the Howard University Alumni Association for more than a decade, and served as president of the Association of Black Psychologists, from 1990 to 2008.

He also embraced the many new African immigrants to San Diego, and was an active participant in the Somali Youth United program for more than a decade, providing guidance and counseling to help them flourish.

In January of 2012, Dr. Waymon was named the Jackie Robinson YMCA Human Dignity Award Recipient for his service, covering more than 50 years, to the San Diego Community. He continued to share his wisdom and insights about the San Diego he helped build for all people.

Dr. Waymon died on January 3rd. He was 94 years old and fortunately many of us were with him for his 94th birthday in May of 2019. Services are tentatively scheduled for January 24th and arrangements are being handled by the Anderson/Ragsdale Mortuary. We will post the final arrangements on our website when we get them.