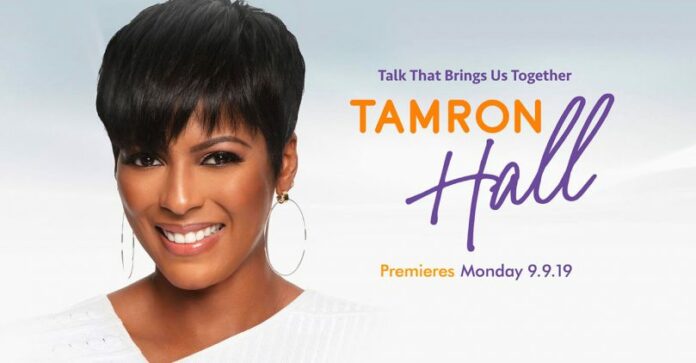 “One of the ways Hall is shaping her show is by insisting the makeup of the crew reflect her audience. Despite having veteran executive producer Bill Geddie at the helm, Hall insisted that more women be hired because she wants to empower people like her – a self-described country girl from Luling, Texas who has made it to the upper echelons of television and news.”

America’s news sweetheart Tamron Hall is back with a self-titled daytime talk show The Tamron Hall Show. Following Hall’s controversial yet celebrated 2017 exit from the Today Show after being curbed in favor of white supremacist-y Megyn Kelly, Hall returns to television as a talk show host on her terms.

In addition to Hall’s professional life, a lot has also changed in her personal life since the abrupt Today and MSNBC exit. The award-winning journalist is now married and a mother of a son, which she discussed at the “Journey to My Wildest Dreams” Toyota sponsored luncheon at the 2019 NABJ national convention held in Miami.

Hall discussed how motherhood has changed her life, the confidence required to be in the news business and the challenges faced by blacks in general and black women specifically on the often-complicated journey to success.

Hall reiterated the importance of having a seat at the table and being ready when the opportunity presents itself. “There was a window, a sliver of opportunity and I took it,” says Hall. “I knew I had to shoot my shot,” says the Texas native. Indeed, Hall shot her shot, landing on her feet with a daytime talk show in a market that is crowded but ripe for a voice like Hall’s.

Hall’s return to daytime pits her against another one of America’s sweethearts, Grammy award-winning singer Kelly Clarkson who is also launching a self-titled talk show on the same day on NBC no less.

Clarkson is the season one winner of American Idol and has served as a judge on the wildly popular NBC reality show The Voice.

Hall will also be wading into territory currently occupied by Wendy Williams, Rachel Ray, and the ladies of The View and The Talk among others. Hall created this talk show to bring people together and to give them an opportunity to share their “authentic journey.”

One of the ways Hall is shaping her show is by insisting the makeup of the crew reflect her audience. Despite having veteran executive producer Bill Geddie at the helm, Hall insisted that more women be hired because she wants to empower people like her – a self-described country girl from Luling, Texas who has made it to the upper echelons of television and news.

Although creating and hosting a daytime talk show is new to Hall, working in front of and behind the camera is not. Hall hosted the Discovery ID series Deadline Crime with Tamron Hall, a weekly series which takes at deep dive into crimes, including unsolved crimes.

Motivated by the unsolved murder of her sister Renate, Hall lead an investigative team of journalists working together to find out what happened and why, to victims throughout the country for three seasons.

Hall’s talk show will differ greatly but will offer in-depth discussions about important topics in addition to traditional daytime lifestyle segments. Hall believes television has the power to help people share their “authentic journey” and wants people to talk about their lives and inspire others in the process.