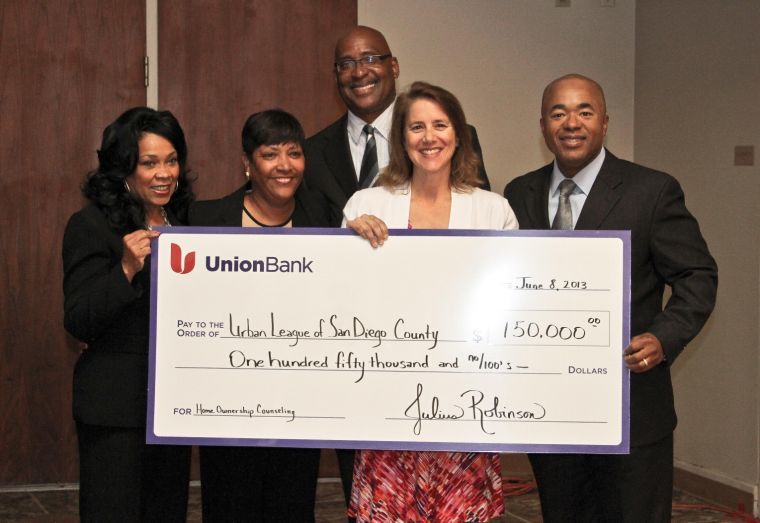 SAN DIEGO, CA – The Urban League of San Diego County (ULSDC) is the proud recipient of a grant funded by the Union Bank Foundation to support its work in educating low-to-moderate-income (LMI) homebuyers.  The $150,000 grant (paid over three years) comes after the Foundation recently announced grant funding, ranging from $25,000 to $100,000, for nearly 30 small business technical assistance and homeownership counseling nonprofit organizations in California and the Pacific Northwest.

Union Bank Senior Vice President and Regional Executive Lawrence Henry presented the first year grant of $50,000 to the Urban League of San Diego County during the Golden Pyramid Scholars Program in San Diego, California.  The grant will help the San Diego Urban League increase the scope and quality of services and focus on homebuyer education in low-to-moderate-income (LMI) communities.

“This grant from the Union Bank Foundation will enable us to work with first-time homebuyers, as well as those re-entering the home ownership market, to create economic growth in the low income ethnic minority communities that we serve,” said San Diego Urban League President and CEO Ray King.  “This is another example of Union Bank and the Union Bank Foundation’s commitment to serving in the communities where they do business.”

“Union Bank is passionate about helping individuals and families increase their knowledge in financial education,” said Union Bank Senior Vice President and Regional Executive Lawrence Henry.  “We recognize that empowering homebuyers with the tools they need is a key element of building and sustaining strong communities, including right here in San Diego.”

The Urban League of San Diego County (ULSDC) was founded in 1953 and is an affiliate of the National Urban League.  Its mission is assisting African Americans and other underserved people in San Diego County to achieve social and economic equality through advocacy, bridge building, program services and research.  Visit our website at www.sdul.org and our Social Media Links at www.iamempoweredsd.org.