Home Arts and Entertainment The Urban Network Music-Entertainment Conference Ready to Touch Down on San Diego,... 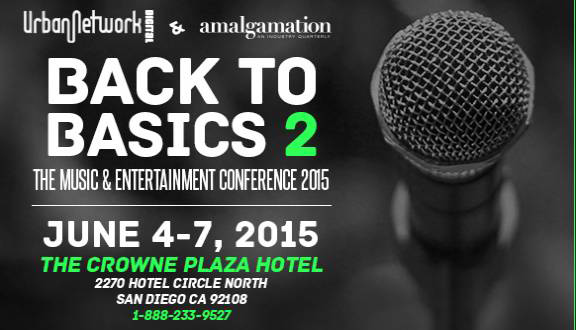 The Music-Entertainment Conference, hosted by Urban Network Digital & Amalgamation Magazine: An Industry Quarterly, guarantees to be a weekend full of industry networking opportunities, informative panel and workshop sessions, along with music performances by nearly 70 recording artists.

Themed “Back to Basics 2,” the Conference will be held June 4-7, 2015, at the tropical-themed Crowne Plaza Hotel, 2270 Hotel Circle North, San Diego, CA 92108. General Registration is $100. Hotel guest rooms are $155 per night plus tax (and includes Breakfast Buffet for two served each day).

An array of panelists and speakers are confirmed to share their wealth of knowledge and success stories with the Conference’s audience of young, talented artists and aspiring executives, in addition to the music business community at large—many who have attended Urban Network Conferences for its 20 plus year run.

Informative and compelling panel discussions have always been vital to the Urban Network Conference experience. This year’s topics and themes range  from “The Many Facets of Urban Radio”; “Today’s Rap Music Game-How to Make Money in 2015”; “Back to Basics 2, What Every Artist Should Know”; “This New Era of A&R”; “A Songwriter/Producer’s Forum”; “Understanding the Convergence of Music, Marketing & Technology in a Connected Culture”; “Break The Internet: The Fundamentals of Getting Discovered and Building Your Brand Online”; “Decks, BPMs and Playlists: A DJ’s Power Panel”; and a special mentoring workshop presented by the Global Education Media Network, for select high school and college students with career aspirations in the music-entertainment industry.

U Can Fly Promotions, under the helm of its CEO Kevin Black [former VP of Interscope Records and President of Black Music, Warner Bros.], will bring its brand of flavor to the Conference with a block of musical showcases, featuring recent Grammy-nominee Angie Fisher, and others. As of press-time, some 30 plus independent recording artists in the Rap and R&B genres are scheduled to perform. See www.urbannetworkdigital.com/performers for more updates and details.

For more information and updates on the Conference, visit www.urbannetworkdigital.com or www.amalgamationmag.com/website