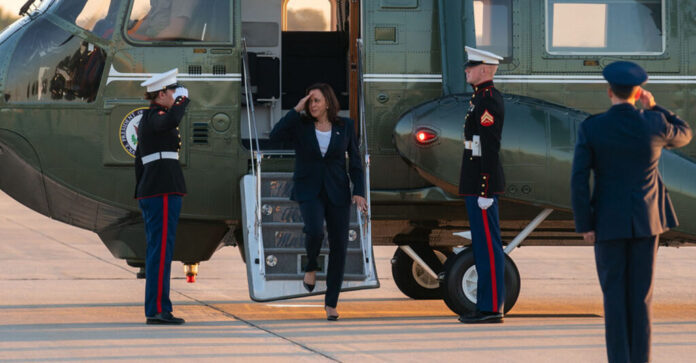 With a record number of women of color representing the administration in various capacities, Harris asserted that “when people hold office reflect those impacted, we can effect change.”

Vice President Kamala Harris held an exclusive discussion with publishers from the National Newspaper Publishers Association, which represents the Black Press of America, to discuss various issues from voting rights to Roe v. Wade and racism in the United States.

“The Black Press has been very special,” Harris told the publishers in a 30-minute conversation moderated by NNPA President and CEO Dr. Benjamin F. Chavis, Jr.

“[The administration] doesn’t expect special treatment, just fair treatment to cover the accomplishments because they are significant and will have, in many cases, a generational impact on families and communities,” Harris remarked.

With a record number of women of color representing the administration in various capacities, Harris asserted that “when people hold office reflect those impacted, we can effect change.”

“At the top, as vice president, I am humbled and honored to hold this position,” she insisted.

“I’ll say that I think this administration and President Joe Biden have been exceptional. For example, I recently gave a speech in South Carolina, and it was in South Carolina that President Biden, then a candidate, said he was going to put a Black woman on the United States Supreme Court.”
In April, Judge Ketanji Brown Jackson earned Senate confirmation as the first Black woman to the nation’s high court.

“This president, our administration, has appointed more Black women to the federal court than, I believe, any administration in the history of this country,” Harris demanded.

Also, she noted the appointment of former Congressional Black Caucus Chair Marcia Fudge as secretary of Housing and Urban Development.

“One of the big issues affecting our country right now is affordable housing, and one of the accomplishments of our administration is the work we’ve been doing on home appraisals and how Black families’ homes get appraised for less than white people,” Harris said.

“We have confronted that issue of biased appraisals,” she added.

Harris said the administration understands the vital issue of voting rights, despite the Senate failing to pass the John Lewis Voting Rights Advancement Act and the suppression laws that Republican-led states have adopted.

She acknowledged how the large voter turnout in the 2020 election and the special Senate election in Georgia in January 2021 helped catapult Democrats to the White House and control both chambers of Congress.

“We need to pass legislation. But, short of that, we’re going to have to keep uplifting states that are doing good work around the right to vote every election cycle,” Harris offered.

“If we help people to understand when they turned out in record numbers in 2020, what we were able to accomplish. We must remind people of what they get when they vote; that’s the reality we face, but we must speak up and keep fighting.”

The vice president noted that many states with voter suppression laws also have statutes restricting other rights.

“There’s an overlap that I think we should be aware of,” Harris insisted.

“I’m very concerned about elected officials around the country who won’t put a name on white supremacists,” Harris stated.

She said part of the solution lies in communities.

“One of the strongest tools is to build coalitions around communities that are targeted, to speak up and be informed so that nobody would be made to stand alone,” Harris said.

“We know we have more in common than what separates us, but part of this has to do with people spewing online and other places the things that are not facts.”

“I believe in many ways [students] are entering an increasingly unsettled world. The things we took for granted as being settled are not settled.

“Foreign policy, the concept of the sovereignty of a nation and its territorial integrity, the right to not be invaded by force … and you see what’s happened in Ukraine. For 70 years, Europe went without war, and now there is war.

“Domestically, 70 years ago, we thought voting rights was settled. Shelby v. Holder gutted the Voting Rights Act in 2013, and now we’re seeing laws sprout up all over the country denying people the ability to receive food and water if they are standing in line to vote. Unsettled is the woman’s ability to decide about her own body.

“We’re not asking anyone to change their beliefs; just let everybody have what they believe and not have the government tell them what to do.”

Harris concluded by sharing her planned celebration of Juneteenth.

She said she would open the Vice President’s official residence, not to celebrities or politicians but to families and individuals from the various wards in the District of Columbia.

“When you look at the epidemic of hate, all that says is that we as leaders have to make sure that we use our platform,” Harris said.

“We have to speak the truth and speak with the spirit of trying to unify our communities.”