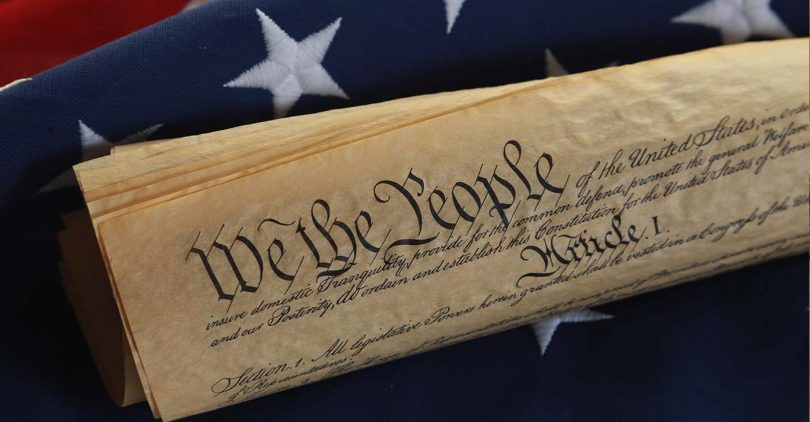 “In Federalist No. 54, James Madison wrote about the chief concern of the representation of slaves concerning taxation and representation,” said Maxim Thorne, an attorney and managing director of The Andrew Goodman Foundation. “This federalist paper states that slaves are property as well as people, therefore requiring some, but not full, representation. Ultimately a decision was made to count every three out of five slaves through the creation of the Three-Fifths Compromise,” he said.

“Presidential elections and the voter experience have long been fraught for black people. From racist poll taxes to made-up literacy tests to the egregious rollback of voting rights over the past 50 years, American democracy has, at times, felt like a weird and failed social experiment.” — Patrisse Cullors

“Every American citizen must have an equal right to vote. There is no reason which can excuse the denial of that right. There is no duty which weighs more heavily on us than the duty we have to ensure that right. … It is wrong—deadly wrong—to deny any of your fellow Americans the right to vote in this country. There is no issue of states’ rights or national rights. There is only the struggle for human rights.”— President Lyndon B. Johnson, from‘The Voting Rights Act Address’

New U.S. Census data projects that in in 2045 the United States will be “minority white,” and with several factors considered, The Progressive succinctly noted the implications: In thirty years, more potential voters will be non-white.

Donald Trump continues to prime audiences with his racial fear-mongering and rhetoric of white nationalism and, nationwide, Republicans have gone out of their way to prevent non-white people from voting, as also noted in The Progressive.

It’s also clear that voter suppression is one of the many lingering and lasting effects of the 500-year-old Transatlantic Slave Trade.

“The whole idea of the slave trade was the disenfranchisement of our human rights,” the Rev. Al Sharpton said in an interview with NNPA Newswire at the Rev. Jesse Jackson’s recent Rainbow Push Coalition Wall Street Project.

“Voter suppression is the disenfranchisement of our human and civil rights and that’s why our struggle must have continuity because we’re still fighting for justice and equality,” Sharpton said.

“Clearly, disenfranchisement has been the theme from the time they brought our people over here on slave ships from Africa,” Jackson said.

“What you see with voter suppression and disenfranchisement is a product of the slave trade for sure,” he said.

During the 2018 midterm elections, voter participation was more than 10 percentage points higher than it was in the 2014 midterm elections, demonstrating Americans’ demand for change and increased enthusiasm for exercising their civic duty to vote.

That said, nearly 120 million eligible Americans did not participate in the November elections, according to a report from the Center for American Progress.

The report noted that widespread voter suppression – particularly against historically marginalized groups – is a reoccurring problem in the United States.

Each election cycle, untold numbers of eligible Americans are prevented from voting due to barriers in the voter registration process, restrictions on casting ballots, and discriminatory and partisan-rigged district maps.

The report described some of the voter suppression measures and other Election Day problems that potentially kept millions of eligible Americans from participating in the 2018 midterm elections.

Many, like Sharpton and Jackson, said the actions of voter suppression and disenfranchisement are remnants of the transatlantic slave trade.

“Africans came here with nothing and with no rights to anything, not even their children. They had to learn an entirely new language,” said Janice Robinson-Celeste, a former nanny, early childhood specialist and one-time daycare owner who publishes SuccessfulBlackParenting.com.

“We owe it to our ancestors — from slavery to the Civil Rights era — to vote in every election. The GOP wants to strip our rights away which is reminiscent of what the slave traders did when our people were kidnapped from Africa and at the least to the pre-civil rights movement. We have to fight for our rights, or we will gradually lose them in a slow boil,” she said.

“It doesn’t matter what candidate you like or don’t like at this point. It matters which will do the best for your children, for you and your family. That’s the one you vote for. The idea is to keep the worst one out of office.”

“From the birthing pains of American Democracy came the racist deformity that remains a part of us today,” said Maxim Thorne, an attorney and managing director of The Andrew Goodman Foundation, which supports youth leadership development, voting accessibility, and social justice initiatives on campuses across the country with mini-grants to select institutions of higher learning and other financial assistance to students.

“This is despite centuries of legal and legislative efforts to repair that core infection of the three-fifths clause that is embedded in the U.S. Constitution,” Thorne said.

In Federalist No. 54, James Madison wrote about the chief concern of the representation of slaves concerning taxation and representation, Thorne said.

“This federalist paper states that slaves are property as well as people, therefore requiring some, but not full, representation. Ultimately a decision was made to count every three out of five slaves through the creation of the Three-Fifths Compromise,” he said.

What’s more, white people, the economic and cultural beneficiaries of the plantocracy, have for centuries tried to maintain that same power structure, Thorne said.

“For many, especially in the American South, this notion has become a sought-after norm. Embedded deep in our racist culture, white citizens continue to undermine the African-American vote and that of other marginalized racial groups today,” he said.

All of that could be seen in the 2018 Midterm Election through the rebirth and escalation of voter suppression tactics throughout the country, Thorne further contends.

He said since 2013 when the United States Supreme Court struck down key provisions of the Voting Rights Act of 1965, many attempts have been made to recreate Jim Crow-era policies meant to disenfranchise minority voters.

“That’s why we see a resurgence of voter ID laws, purging of voter rolls, as well as threats and intimidation,” Thorne said.

“This paradigm was never more glaring than in the 2018 Georgia Gubernatorial Race. Stacey Abrams, the first Black woman to be nominated for governor in the United States, had been surfacing as a viable candidate for the position since 2013,” he said.

“Like Obama, she electrified the African-American and progressive communities. It became clear however that the voting structure was rigged against her.

“The Georgia Secretary of State, Briana Kemp, who oversaw voting in the state, refused to step down from his position while running as her opponent.

“Mr. Kemp attempted to close polling stations in majority Black precincts. Malfunctioning voting machines in largely Black counties affected voting. Voters complained to the Georgia NAACP that the voting machines registered a vote for Kemp even when they selected Abrams.

“Fifty-three thousand voter registration applications were never processed, from predominantly Black districts, greater than the margin by which Stacey Abrams lost the election. Ultimately, Abrams conceded in a race that was sullied by suppression.”

Those nefarious and racist voter suppression activities fulfill the spirit of the three-fifths clause, Thorne said.

“The nation appears to have moved on from the Georgia election with many of the structural problems remaining intact and I expect there will be loud rumblings of unfairness in 2020 again but vested interests are only thinking in partisan patterns, not about real inclusive democracy,” he said.

“This unquestioned acceptance of the denial of African-American voting rights is the current festering of the racist seed of our founding.”