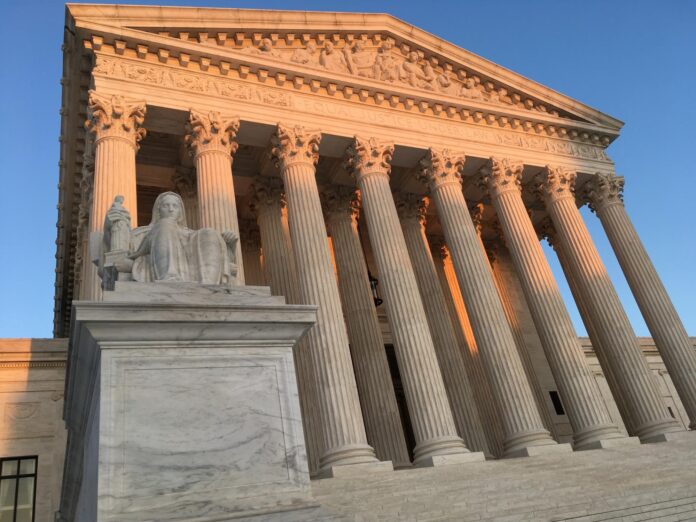 Sometimes it’s 50 miles — one way — for Native Americans living on reservations or in remote areas of Arizona to drive their ballots to a post office or an official drop-off site. Public transportation? Sparse to non-existent. Unpaved roads? Often abundant. And with the cost of automobile ownership, maintenance, and insurance out of reach for many, ballot collection — a friend, neighbor, or relative’s willingness to deliver one’s ballot — is a welcome act of civic engagement.

Jacqueline De Leon, Staff Attorney, Native American Rights Fund, emphasized the urgent need for ballot collection to remain protected under Section 2 of the Voting Rights Act. “Native Americans live in conditions of abject poverty that would shock most Americans,” she said at a press conference convened by the Brennan Center for Justice. “We believe the first on the land should not be the last to vote.”

The U.S. Supreme Court convened on March 2 to hear Brnovich v. Democratic National Committee, named for Arizona’s attorney Mark Brnovich. Arizona is not only seeking to end ballot collection, but also to discard the entirety of a voter’s choices should that individual vote in the incorrect precinct.

Amicus briefs filed in support of the DNC’s challenge cite the ongoing practice of changing the closing hours or locations of precincts without due notice, forcing voters to cast out of precinct (OOP) ballots.

Alex Gulotta, Arizona State Director, All Voting is Local Arizona, minced no words about the impact of Arizona’s proposed law on ballot collection. “The ballot collection ban targets voters of color,” he said, noting that Arizona typically records 80 percent of its votes by mail-in ballots, a percentage that spiked to 88 percent in this last election cycle. If Arizona’s desired ban were allowed to stand by the Supreme Court, it would be “a huge impediment to voters of color participating in Arizona,” Gulotta asserted.

Brnovich v. Democratic National Committee comes before the Supreme Court after Arizona sought to implement both policies immediately after the Shelby County v Holder decision in 2013. The policies were challenged in court, and though voting advocates lost initially, they won on appeal in the Ninth Circuit Court. Brnovich is an appeal by Arizona to the U.S. Supreme Court to overturn the Ninth Circuit’s decision.

In its Shelby decision, the Supreme Court ruled by a vote of 5-4 to suspend the use of Section 5, often known as the pre-clearance provision, viewed by voting rights advocates as the heart of the Voting Rights Act. Section 5 required that states and jurisdictions with a history of discriminatory voting laws and policies receive federal approval before their proposed changes to voting procedures could be legally implemented. The court ruled that Section 5 was based on a formula for data collection that was outdated and therefore could not be fairly implemented without violating state sovereignty. No new data formula has since been adopted.

The primary argument behind the Court’s decision, as voiced by Chief Justice John Roberts, was that the times of rampant and overt discrimination necessitating the passage of the Voting Rights Act in 1965 have faded into the past. It’s not a sentiment that Alison Riggs shares.

Riggs is the Interim Executive Director and chief Counsel, Voting Rights, or the Southern Coalition for Social Justice. Riggs listed examples of the social and economic inequities that accrue to communities whose right to vote is impeded. Inferior education, for example, can result from schools that are underfunded by legislators who likely would not have been elected had an electorate been more inclusive. Fewer educational opportunities limit employment opportunities, which in turn negatively impacts job earnings and long-term financial security. After the Shelby decision in 2013, Riggs said, “We saw what we expected.” Poverty in North Carolina’s African American community became more widespread.

“Proving intent is not always possible. It’s very challenging,” Riggs noted. And therein lies the driving principle of Section 2, that the Supreme Court needs merely to look at the discriminatory effect of Arizona’s proposed changes, regardless of the state’s stated intent to better protect against voter fraud.

Laura Dent is Executive Director, Chispa Arizona, a program of the League of Conservation Voters that addresses issues of environmental racism, particularly as they affect those “impacted first and worst.” “Our organization has registered 44,000 Latinos and people of color, and new American majority voters in the state since 2018,” Dent said. She attributes the plethora of bills introduced in Arizona to further restrict ballot access as a reaction to the increased engagement of these groups and young voters.

Arizona is not an exception. The Brennan Center notes there are now “over 253 restrictive bills are under consideration in 43 states legislatures,” and that a Supreme Court ruling that discards the protection of accounting for discriminatory impact afforded by Section 2 would be disastrous for minority voters.

Voting rights advocates take some solace from the fact that, with or without Section 2, the Supreme Court could simply invoke the Fifteenth Amendment to deny Arizona its desired policy changes: “The right of citizens of the United States to vote shall not be denied or abridged by the United States by any State on account of race, color, or previous condition of servitude.”