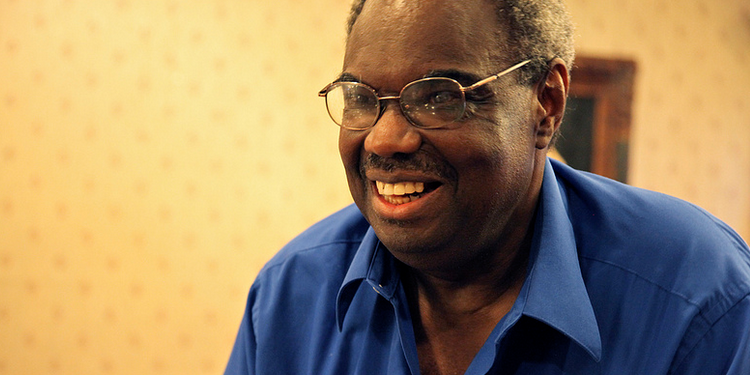 I desperately called on my dear mother. Across the chasm of her death nearly 20 years ago, she reminded me of what she said to me and to her many children nearly sixty years ago. I felt her spirit moving within me. I was strengthened. Now, I can go on.

When things got real bad, our mother would call us together in the front room. We had only one chair in the whole house. She would sit in the chair and make us children sit on the floor in front of her. She would go quiet until she had our full attention. Then she would say: “Children, things are always kind of bad with this big po’ family and all. But they are real bad now.” She would go quiet for a long moment, causing us to focus even more intently. Then she would continue: “But don’t y’all worry. I am at my best when things get bad.” It was powerful. It forged our strength. It prepared us to engage struggle. It lifted our spirits. It gave us hope. Even today, this memory brings tears to my eyes, trembling to my being, and hope to my heart.

I called upon my mother on Wednesday morning when I heard that Businessman Donald Trump was now President-Elect Trump. I went really deep inside myself. I could sense the hard times coming. I had to call on my dear deceased mother to help me through the moment.

I hope and pray that I am wrong, but I feel hard times coming. Let me tell you why. The most critical thing a president does is to set the tone for the entire country. His/her every action stimulates millions of actions and/or reactions. His every refusal or failure to act stimulates numerous actions and/or reactions. And every action or failure to act is viewed through the prism of everything that was said by the candidate during the election. Businessman Trump said and did many disturbing things as a presidential candidate. That’s why I see hard times coming. We must be at our best when things get bad.

The negative germinates, takes root, grows and produces bad fruit without cultivation. It is like weeds. The positive requires continuous cultivation to produce good fruit. It is like the crop we plant. Because Businessman Trump planted such negative seeds as a candidate, a President Trump’s mere presence in the most powerful position in the world causes those seeds to germinate, grow and bear bad fruit. We must be at our best when things get bad.

I fear that the seeds planted during the campaign will tell us how women and girls can be mistreated. We already have too much mistreatment of women and girls. Too many are abused verbally, physically and psychologically. To be fair, these seeds of abuse were planted eons ago But Businessman Trump has cultivated these seeds with the fertilizer of example, the waters of acceptance, and the warmth of election success. These seeds will grow and bear many and varied poisonous fruit. The challenges will be even greater and more widespread. We must be at our best when things get bad.

I am afraid that the seeds planted in the immigration fields will bear poisonous fruits for millions of immigrants, and not just undocumented immigrants. Sustained fear does terrible things to us, especially to our children. When we blame complex economic and societal woes on those who appear different and are less powerful, it becomes extremely destructive. Already we see more children bullying other children of foreign descent. Some children passed out “deportation notices” to other children just days after the election. We must be at our best when things get bad.

I am fearful that health care will be completely denied to tens of millions of Americans and reduced for millions more. Businessman Trump has promised to repeal and replace Obama Care. We heard much about repeal and little about replace. I remember the old folks saying, “When you have your health, you have everything.” Having our health may not be everything, but it lays the foundation for us to get what we need in life. The growth of an anti-health care spirit for the left out will be very bad. We must be at our best when things are bad.

I am terrified that the fear of terrorism will mushroom. Businessman Trump whipped up that fear, tying terrorism to the 1.5 billion Muslims around the world. When terror and religion mix, it produces extremely bad fruit. We must be at our best when things get bad.

When the powerful are told over and over again that they are weak, it creates a terrible dynamic. The United States is by far the most powerful country in the world. Its economy is bigger than the next three countries combined. Its military is the most powerful, funded more than the next five countries combined. It dominates sports, winning more Olympic medals than any other country. Its culture is the most dominant by far, causing more people from around the world to come to the United States than to any other country. Somehow Businessman/Candidate Trump convinced so many that we are weak economically, weak militarily, weak in status, weak in culture, weak in leadership. When the powerful feels weak, it creates a very dangerous dynamic. It is very bad when the most powerful attempts to prove its power out of a self-perception of weakness. We must be at our best when things get bad.

I am fully aware that most things we fear are not as bad as we feared. Neither are most things as good as we hoped. However, every now and then our worst fears are exceeded. So are our best hopes.

Hank Sanders has served as a member of the Alabama State Senate since 1983. You can reach Mr. Sanders by email at hank23sanders@gmail.com.