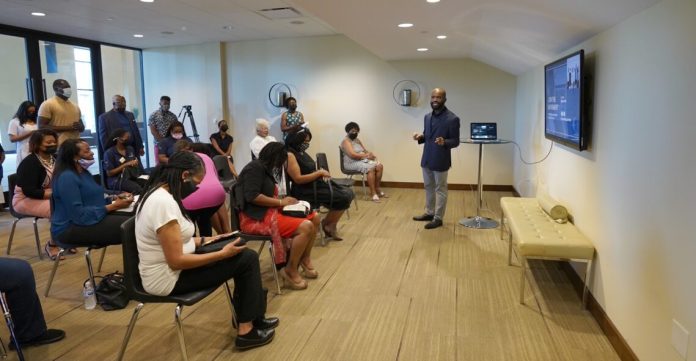 A nonpartisan and community-centered movement reminiscent of the Freedom Riders of the Civil Rights era is on a mission to help Black communities resist and overcome voter suppression during the 2022 midterm election and beyond.

“YBLOC is mobilizing one of the most ambitious voter protection organizing campaigns in history because inclusive democracy hangs in the balance in November,” Abdul Dosunmu, YBLOC’s founder and chief strategist, said during an appearance on the National Newspaper Publishers Association’s live morning news broadcast, Let It Be Known.

“Our intention is to proactively ready Black voters to do what we have always done: fight the barriers of voter suppression and insist on our right to be heard.”

The coalition has launched a “Black Ballots, Black Futures 2002” voter protection and organizing campaign.
Dosunmu isn’t a stranger to politics and mobilizing.

An Obama administration appointee to the U.S. Department of Transportation, Dosunmu served as the department’s chief of staff advisor.

He also worked as a senior associate at Precision Strategies, a digital, data, communications, and campaign management firm founded by three pioneers of President Barack Obama’s 2008 and 2012 campaigns.

He said the seven-state push would count among the most extensive Black-led voter education efforts to train Black voters to identify and resist voter suppression tactics to ensure their ballots are counted.

“These sessions aim to equip an estimated 60,000 Black voters with the information they need to protect their vote and help amplify this message in their communities,” Dosunmu stated.

The group has found success.

Earlier this year, YBLOC and a coalition of organizations representing the Black legal community launched “Pass Her the Gavel,” a letter-writing and public engagement campaign that supported a fair confirmation process for Supreme Court Justice Ketanji Brown Jackson.

Brown Jackson earned confirmation to the high court in April.
Additionally, as part of the ongoing grassroots effort to protect and empower the Black electorate, YBLOC filed an amicus brief in a federal lawsuit that challenged Texas’s voter suppression law, Senate Bill 1.

The brief helped to outline how Senate Bill 1 harms Black voters and the civic organizations that serve them.
Further, in partnership with the Center for Civic Design, the organization recently conducted a focus group in Dallas to understand voter suppression laws’ impact on Black voters.

According to YBLOC, the findings from the focus group reveal that:

All participants had experienced difficulty voting in the past. This included long wait times, understaffed polling places, a lack of signage to identify polling places, and closed election centers.

Participants indicated that Texas’s State Bill 1 and similar voter suppression bills across the country had impacted Black voters’ trust in the election process. In addition, the focus group participants noted feelings of voter suppression, information deprivation, and concern about the increased criminalization of voter assistants.

Participants expressed an overall lack of information from state and local election officials. This included information about where and how they could cast their ballot and important election dates/deadlines.

“It is vital that our voter protection education efforts are community-informed and rooted in the concrete experiences of Black voters,” Dosunmu stated. “This focus group provided important data on voter suppression laws and tactics impact

Black voters and further underscored that our democracy is at a precipice.”

Dosunmu added that YBLOC wants everyone involved in its efforts to fight voter suppression.

“We are calling on all young Black lawyers and law students to join our fight,” he stated.

Click here to see the full discussion with Abdul Dosunmu.

Get out and VOTE! Read the Voice & Viewpoint’s Official Voting Guide for the Nov. 8 Midterms