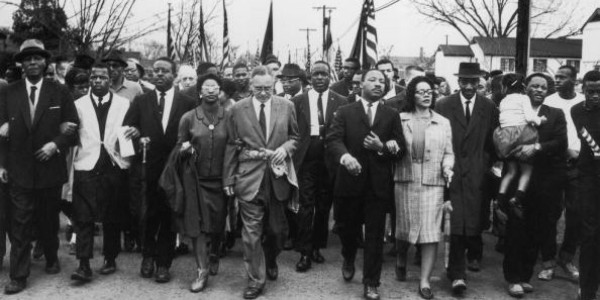 March 7, 2015 is a Saturday that will live forever in the hearts of every freedom-loving citizen in the world. It simply overpowered us with emotion as we pushed to stand as close as we could get to the Edmund Pettus Bridge in Selma to hear our President speak.

I had marched in Selma in 1965, and I remembered the terror of being in a place where I was not wanted and where the opponents of voting rights for Black Americans were uninhibited in demonstrating their first Amendment right to freely express their disdain for our cause and denigrated us for our misguided choice of folks to love.

Students from Chicago and I drove to Selma in 1965.  Our VW van had been on the road back and forth between Selma and Montgomery and was surely as well known to the KKK as the Chevy sedan Viola Liuzzo was driving when she was shot and killed on the road the Marchers used.  We were uncertain of when the hood of death might be forced over our heads, so our delegation plotted together and agreed that if we were stopped, we would scatter in hopes that one of us would survive and find someone to help save the rest of us.

Little wonder then that when the President of the United States stood at the foot of the Edmund Pettus Bridge to address us, everyone’s eyes began to water in a flood of pride, and our stomping and shouting and jumping for joy shook the ground beneath us. We could not stand still after having to wait so long for a day like this.

The Governor of Alabama welcomed us, but President Obama was introduced by John Lewis, a black U.S, Congressman who had been trampled and clubbed by the Alabama State troopers who today hosted security and public safety forces from Washington D.C., Birmingham, Mobile and dozens of other communities working together to assure John Lewis, our President and the thousands of marchers were safe.  John Lewis was introduced by the black, female Congressional representative Terri Sewell from Selma who now proudly represents her district and is unequivocal proof of the power of the right to vote.

President Obama stood at the foot of that infamous bridge and spoke with a passion and a power that only LBJ before him had the courage to apply to the cause of civil rights.  There was an excitement in the air that for the first time in my life made me giddy to listen to the leader of the most powerful nation in the world. But there was something else: for once I had the joy of seeing my president celebrate his own FREEDOM!

Our President has been battered and brutalized for so much of his presidency by a previously unseen hostility that has belittled his capabilities and his leadership.

Today President Obama was FREE, and he was respected and loved!

To think that I had the good fortune to have been on that bridge in a march in 1965 that would serve as the platform for the President of the United States to finally find his freedom and deliver his personal version of the Emancipation Proclamation.

As I listened, there was nowhere for me to go and nowhere to turn to express the inner power of the connection between my contribution as one of thousands of freedom fighters who answered the call from Dr. King and the folks in Selma that led to the triumph that the Obama Presidency carries.  I had the good sense to have asked my adult children to come along to Selma with me, and all four of them did.  So I fell into the arms of my older daughter who held me as tears of gratitude, joy and pride flowed freely from both of us.

And as if that was not enough…

After the Obama speech, we walked back toward the food tents, but I needed a rest for my 78 year old bones and settled on the steps of the Selma Public Safety Building when out of that building emerged the Rev. Jesse Jackson.  Enjoying my new freedoms, I chased him and caught him and received for my trouble a bear hug and the warmest greeting imaginable as his tired mind recovered the memories of work together at Operation Breadbasket: “Dick Lawrence, Dick Lawrence.  This is my buddy.  This is my buddy.”  I just smiled and asked him if he would take a picture with the only one of my children present at the moment. He greeted my daughter, Valory, with “Yes, Yes.  I met your babies at the hotel the other day.” That he remembered them pleased us all and added an emotional exclamation mark to an incredible day.

Jesse had run for president in 1984 and 1988, and I was proud then to have been able to work some precincts for him in the New Hampshire primary.

Even though Jesse lost, I cannot help but feel his candidacy forced the nation to think seriously for the first time about the prospect of a black president, and while there were way too many heroes and elected officials to allow his inclusion in the program, I cannot help but feel that his voice would have filled out the choir.

But my day was not over as it turned out.

Another of the foot soldiers from 1965, Bob Peters of Florence, Oregon and I had dinner together with our families.  Bob has had a serious stroke but decided to make the special effort required to be in Selma and shared the surprise rewards of having been in the right place at the right time to turn history in the direction of greater freedom and deepen our appreciation for our right to vote.  In a way we had no way of anticipating, we had helped to make possible the election of our first black president.

We never know when a little extra effort will find the mark that makes more of a difference than any of us could have ever dreamed.

So, I woke up in 1965 heading for Selma with a freedom song ringing in my ears as we sang “Woke up this morning with my mind, set on Freedom.” We sang it again and again and again and ended with “Hallelu, Hallelu, Hallelu…jah.” And I found out that our energies had helped to make possible the day when a black president would stand with us on the Edmund Pettus Bridge and celebrate our commitment to finish the march to the place where every American is able, free and eager to vote.

Little wonder that I am singing again.

Hallelujah!
Unlike many news organizations, Voice & Viewpoint delivers content that matters to you. Help us keep it that way by making a generous donation for as low as $2. Your support will fund local, investigative journalism for the community, by the community.

City Council Votes Yes on Housing, No on Parks