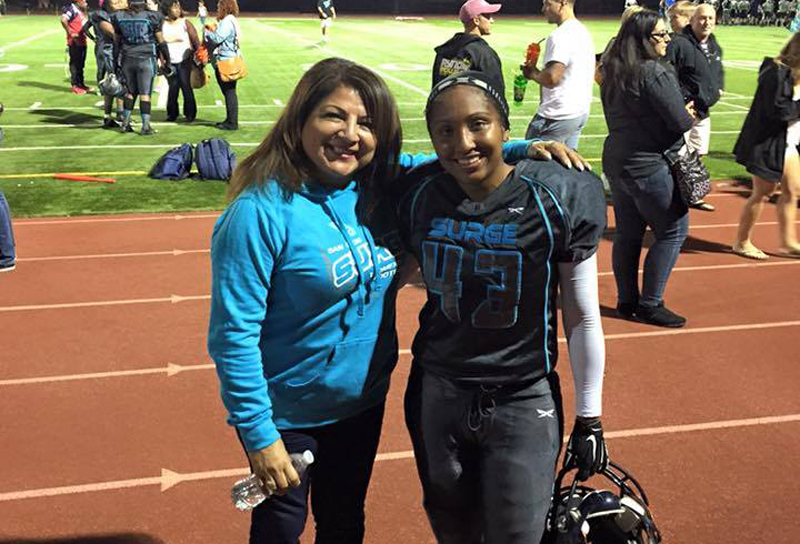 San Diego football fans remember a time when seeing the name Bush on the back of a football jersey meant a dynamic and shifty athlete with blazing speed was on the way to the end zone. It’s been years since Reggie Bush electrified fans at Helix High School, but a new namesake is turning heads in the Independent Women’s Football League. Adriana Bush doesn’t have a blood relation to Reggie, but her skills on the field are reminiscent of the tailback who struck fear in his opposition.

Bush is a San Diego native who spent her formative years in the National City area. Growing up in a household with 4 other brothers, sports and competition were constantly in her life. Her journey in the sports world began with youth t-ball and in Middle School she adopted track and field along with cross country after watching her brothers.

“I remember seeing my brother running and thinking I want to be on the track and compete,” said Bush. “I’ve never been a sideline person.”

Her eighth grade Science teacher noticed Bush’s talent on the track and encouraged her to continue running at Sweetwater High School. She became a standout in sprinting, hurdles, jumping and relay events. After high school, Bush decided to focus on her education. She attended San Diego State University double majoring in History and Journalism. The sports world wasn’t completely out of her system, however. She stayed connected by covering athletics as the sports editor for the SDSU’s newspaper ‘The Daily Aztec.’

After graduation, Bush was in need of another challenge. She was first introduced to the IWFL while doing research for story ideas for her capstone presentation for her journalism major. Founded in 2000, the league hosts 37 teams and is a full pad and tackle organization. Players pay to register for the league and have to be 18 years or older to play.

Bush reached out to a local team called the San Diego Surge and made the 2015 squad as a running back. With limited playing time her rookie year, Bush compiled 338 yards on 38 carries and 6 touchdowns. Many of yards came in breakaway runs displaying her speed.

“Half of the time I’m laughing. In my head I’m thinking ‘I’m going to run away from you and you can’t catch me,’” said Bush.

When the Surge announced they would be inactive for the 2016 season, Bush connected with a developing team called the North County Stars out of Carlsbad. Her work ethic and athletic talent stood out early august her new coaches.

“Somebody like her who in my personal opinion is a star in this league comes to a new team humble that says a lot about them not just as an athlete but as a person also,” said Star’s running back coach Charles Dorsey. “I look at her as the quiet type yet someone who is leading the team through her performance.”

The IWFL season begins in April and Bush believes there is a lot spectators can gain from checking out their first women’s football game.

“If you’re a fan of football in general, you would love to watch us play,” Bush said. “If you bring your daughters to some of our games they can see there’s no gender barriers. It’s good for girls to see that they can do anything a guy can do.”

Visit the North County Stars Facebook page for their 2016 schedule