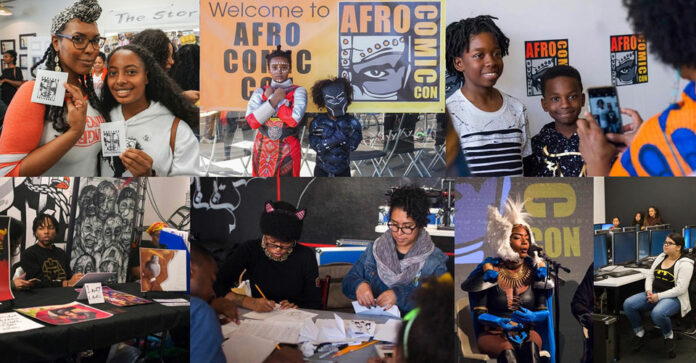 The Bay Area is the most progressive bastion of the historically liberal state of California (although the sweep towards gentrification may soon turn the political tide in the opposite direction) and none of the cities and towns within it upholds the standard of progressiveness higher than the East Bay municipality of Berkeley.

One relatively unsung product of its liberal sway is the founder of the annual AfroComicCon, Oakland’s Michael James. Now in its third iteration, AfroComicCon is a three-day event showcasing comic books and pop culture related to (but assuredly not limited to) the African Diaspora.

The event is held in the cities of Oakland and neighboring Emeryville, California and aims to be an inclusive entity as opposed to other, similar conventions geared towards special groups and demographics. It is a 501(c)(3) non-profit organization affiliated with the Oakland Technology and Education Center.

Initially, low-brow affairs concentrating solely on comics and special interest groups (the first San Diego Comic-Con was held in a hotel basement with perhaps 300 people in 1970), these “cons” have mushroomed to multi-genre affairs drawing tens of thousands of participants and showcasing gaming, sci-fi, horror, and other facets of pop culture.

Film and television companies use these venues to showcase their wares and gauge public response to shows prior to general release.

Monetarily, they are a financial windfall, generating millions in revenue and contributing significantly to the surrounding community’s economy. A major component of these events is the practice of cosplay, in which fans dress up as their favorite superheroes and animated characters.

The story behind AfroComicCon can be traced back to the roots of its founder. James came up under the sway of Oakland’s Allen Temple Baptist Church and its progressive pastor, the Rev. J. Alfred Smith, Sr. Among the luminaries passing through its portals were former Congressman and Oakland Mayor Ron Dellums, and civil rights activists the Rev. Jesse Jackson and the Rev. Al Sharpton.

The seeds of social liberalism firmly planted, young James graduated from UC Davis, with a bachelor’s in Environmental Planning to begin his tenure in corporate America, a period he found stifling and restrictive.

The millennium era found him politicized through work with various non-profit concerns and travels overseas where he participated in the 2007 release of South African dissident Nelson Mandela. These events were intertwined by his work to promote computer literacy among the Bay Area’s disadvantaged during a period where he became disenchanted with the educational system’s methodology in distributing state and federal funding to the community. During this time, he had been involved in a successful literacy program under the umbrella of UC Berkeley.

The experience soured him, however, as he saw how the non-profit apparatus worked. He did quite well with the $850,000 allotted to his program until he found out it was just part of the $7 million the university was receiving over a seven-year period.

A series of discussions he had with like-minded people, and a chance visit to the San Diego Comi-con (the benchmark for all such gatherings), spawned the nucleus of what would become the AfroComicCon, a platform in which to promote reading through graphic novels, comic books, and other paraphernalia.

Supporting him and co-founding AfroComicCon with him since the beginning has been a kindred spirit and fellow Berkeley High School alum, Hally Bellah-Guther.

A career professional dancer in the United States and in Europe, Bellah-Guther, who has taught ballet and fitness locally for 20 years, was a passionate volunteer and board member of D.U.S.T.Y. (Oakland Technology & Education Center) and had been Michael’s partner working on literacy and arts programs since 2012. She caught the bug and became completely devoted to the project. She has been overseeing every aspect of AfroComicCon since prepping for the first year because it combined two passions of hers: the arts and the fight against injustice and inequity.

By 2017, they’d secured enough funding to compile a shoestring budget, and they were ready to mount the first tentative steps towards realizing the vision.

The Chance for Inclusion

They had no intention of replicating the success of the decades-old Comic-con (convention-goers this past summer for that event reached in excess of 130,000), but in their inaugural staging, they attracted some 400 to 500 attendees, a more than respectable gathering, considering their resources and financial limitations.

“Everyone has a story and we can all be superheroes in our own right,” says James, as an explanation for the interest in this new and novel venue for popular culture.

Attendance for the next calendar year 2018 increased to 1000 plus. Among those appearing for the 2019 AfroComicCon were writer/producer Rodney Barnes (“American Gods,” “The Boondocks,” “Everybody Hates Chris, “ and the upcoming “Wu-Tang: An American Saga”); spoken word poet, street lit author and UC Berkeley professor Aya de Leon; and actress Onika Day (“Orange is the New Black,” “Wu-Tang: An American Saga”).

As in past years, the convention sought to provide a wide variety of educational and interactive experiences meant to engage the whole family. These included a fashion show mounted by Jasline Berry (fashionista and Afro-renaissance woman) and James Head (costume designer for rapper M.C. Hammer), promotion by and about the gaming industry, and other venues to prompt event-goers to, in James’ words, “move away from commercialism that doesn’t support us.”

FLASH- Fit Like A Super Hero- which was spearheaded by Bellah-Guther since 2018, includes multi-disciplines to encourage the public to engage in healthier lifestyles through physical activity and healthy diets. A notable component in this is a demonstration of Brazilian martial arts, Malandro Mandingo: The Body Magic of Capoeira. There has also been Hip Hop and Turf Dance, Worldbeat/Salsa and Kung fu demos and classes and performances.

“I try to help out in any capacity that I can,” she says.

An attendee of similar events prior to joining AfroComicCon, she notes that they were generally slanted towards a heterosexual White male demographic, to the exclusion of minorities and women.

A Bay Area transplant who is opening up her own brick and mortar book store (“Hella Novella” at 2301 Mission Street in San Francisco), Smith sees this undertaking as a sanctuary for “geeks” like herself who have never fit in at any of the other conventions she’s attended as the “odd person out.” It is a relief from the overwhelming xenophobia she’s experienced as a Black woman, and she cherishes the shared cultural experience that AfroComicCon offers (for more on Sketch, visit http://www.sketchsmith.com/).

“(Convention-goers can) come away with a sense of ownership and collaboration.”
—AfroComicCon founder Michael James.

While AfroComicCon takes place within the confines of the Bay Area and is primarily meant, in the words on its Facebook page, “…to empower artists who have been denied access to equal opportunity,” everyone cordially received an invite.