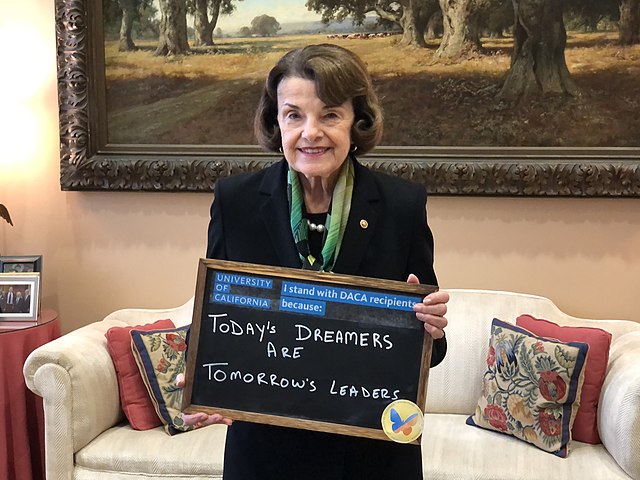 So how would you like the idea of Barbara Lee, Oakland’s member of Congress, getting a bump up to the big house, the U.S. Senate? Lee’s name has risen to the top of the list after some sitting members of Congress went to the San Francisco Chronicle to air concerns that Senator Dianne Feinstein is “mentally unfit” to do the job.

This is nothing less than a blatant smear of Feinstein by cowardly anonymous sources. Rumors about Feinstein’s memory lapses have been around for at least three years. That’s when I first heard them. But for some reason everyone has been civil about things until now. The Chronicle didn’t have to publish the story. But knowing it would create a splash, it readily agreed to protect all involved. Except Feinstein.

The paper cited a Democratic member of the House, and four U.S. senators (three Democrats, one Republican). One of the Democratic senators said Feinstein’s memory is “rapidly deteriorating,” and that “it appears she can no longer fulfill her job duties without her staff doing much of the work required.”

This is serious stuff. But it was a mistake to not name all the sources. Every last one.
The Chronicle said the sources “who expressed concerns about Feinstein’s acuity said that doing so was painful because of their respect for the senator and her groundbreaking career. Each spoke on condition of anonymity, because they said they did not want to jeopardize their relationship with her and their mutual friends and colleagues.”

Those are backstabbing friends Feinstein doesn’t need. Indeed, it would help to know who is sharing this information because one of them may be interested in running for Feinstein’s seat should this story generate the push that forces Feinstein’s resignation.

Think about this. The Chronicle is protecting those using innuendo of the possible medical condition of a sitting U.S. Senator. And then casting aspersions on her ability to govern.
That’s the cover. It’s a governance thing.

No. It’s a cheap shot, enabled by journalism’s use of the “anonymous source.”
The paper editorialized: “If Feinstein is mentally unfit, Democrats need to tell her openly. And she should resign.”

The conditional “if” is intended to make everything seem fair. But how fair is it after the Chronicle puts out a sensationalistic story and protects all the naysayers? That’s just dirty. In the meantime, the scuttlebutt has already begun as to who will replace Feinstein. For what?

There is nothing in the Constitution that makes memory lapses illegal. What you are seeing is unmistakable, unabashed AGEISM. Ageism is a form of unfair discrimination and oppression toward older people based on stereotypical views.

It is a form of othering no less virulent than racism or sexism. Yet society hasn’t quite come to terms with ageism, and it remains a disgusting form of discrimination that we allow to go unchallenged.

In response to the story, Feinstein issued a statement, but declined an interview:
“The last year has been extremely painful and distracting for me, flying back and forth to visit my dying husband who passed just a few weeks ago,” she said. “But there’s no question I’m still serving and delivering for the people of California, and I’ll put my record up against anyone’s.”

The fact is some impatient Democrats want Feinstein’s job, and they’re not ashamed of attempting to push her out this very minute and resorting to ageism. This, unfortunately, has become standard practice.

I saw it happen before when Rep. Mike Honda, who succeeded Norman Y. Mineta in Congress and served from 2001 to 2017, was pushed out by Ro Khanna. It’s a pure power grab by the upstarts. But no one ever stops to consider how the Senate actually works.

The more senior you are, the more power your state has. In the Senate, where every state, regardless of size, has two votes each, those two votes backed by seniority are magnified.
Feinstein, who has been in the Senate since 1992, is more powerful for all Californians and its 6 million Asian Americans than a rookie senator with blind ambition.

If there’s a problem with Feinstein, these things should be discussed in private among party leaders. We are talking about a health issue after all. Ultimately, Feinstein, who has been a dedicated public servant from the time she was a San Francisco supervisor in the 1970s, deserves the right to decide when she steps down.

Feinstein is owed at least that. If she can do the job and deliver for the people of California, her seniority is a benefit. Besides, ageism is not a good look in a democracy.