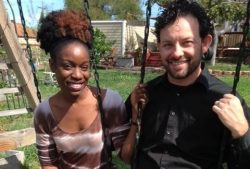 When Jocelyn and Matthew Watkins found out they were expecting, they moved into a bigger home with a yard large enough for a swing set, puppet theater, and family dog. What made the couple a little different, however, is that they were expecting foster children. “We heard there was a need for families who would keep sibling sets together and we thought we’d better get a bigger place,” Jocelyn says as she sits next to Matthew in the family room of their La Mesa home, a quiet country house that retains the feeling of its farming roots.

The Watkins home is a child’s paradise with a variety of toys and three-dimensional puzzles neatly set throughout the house. Handmade drawings hang from the walls of the dining room, which is equipped with a high chair and Cookie Monster bib waiting for their preschooler to return home for the day. It looks like the set of a sitcom about a modern family without a problem in the world. In reality, it’s a lot of hard work to create a stable home, says the couple. But it’s also very rewarding. “These kids need love, and they bring more energy and life to our home,” explains Jocelyn. “We’ve become better people and our marriage has grown stronger through the experience.”

After providing weekend care for toddler siblings, Jocelyn and Matthew were asked by Angels Foster Family Network to consider a special needs child, a four-year-old girl with autism. The little girl, who they call their “Angel,” has been in their care for nearly a year. The couple quickly realized that the puppet shows that were such a hit with the toddler siblings weren’t going to cut it because the little girl doesn’t respond to imaginative or representational play. “Things are what they are with her,” explains Jocelyn. That first night with Angel, Matthew took out his guitar and started playing music. “Neil Young, Johnny Cash, she loves it all,” he says. Even though Angel is non-verbal, they could tell she was responding. She rocked back and forth, clapped her hands, and shook her head, all with a big smile on her face. And having that swing set in the backyard – a godsend, says Jocelyn, recalling how Angel spent hours on the swing when she first arrived.

When Angel first came to the Watkins home, the couple also noticed that the little girl seemed preoccupied with food. “She felt like she had to fend for herself and scavenge for food, but after a while she learned to trust that we were going to feed her,” says Jocelyn. Part of that trust is the stability of living in a loving home where she is well cared for. The other part is that Jocelyn includes snacks in their after-school routine, which includes speech, occupational, behavioral, and trauma-based play therapy. “She is very particular — she loves French fries and chicken nuggets,” says Jocelyn.

Matthew and Jocelyn discussed becoming foster parents even before they married five years ago. They immediately agreed it was something they wanted to do, though Matthew was the one with direct experience in this area. “When I was in high school, a neighbor had a bad home situation and the child was taken by Child Protective Services,” he recalls. He then became a volunteer counselor through a church in North County and worked at a camp for foster youth. “It was fun to see kids act like kids, and see that there are other options for life than what they may have been exposed to. Even in the space of one week with an adult loving and caring for them and thinking they’re awesome, it can be enough to give them another way to see the world.” Some day the couple hopes to adopt and have biological children as well continuing to foster.

Serving as foster parents fits with Watkins’ deeply held Christian faith as well. Members of The Flood Church in El Cajon, the couple says through fostering children they are given the opportunity to practice compassion, patience, and love. Fostering Angel “challenges my false narrative of people’s worth,” Jocelyn says. “I see her as a gift, a precious and beautiful child of God, and seeing her that way makes it easy to have compassion for her.” 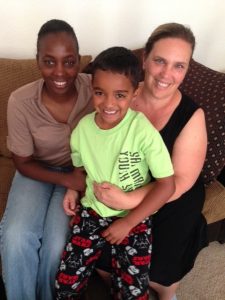 A family portrait hangs in the living room of Pamela Specht and Fonda Wilson’s home. The photo is of the couple surrounded by their seven young children. What’s unusual about the picture is that it was taken on one of the rare occasions when everyone was together. Six of the kids are Pamela and Fonda’s past or current foster children; the seventh is King, who was a foster child the couple adopted. The photo was taken at King’s sixth birthday party, where the gift he asked for was to have the whole family together for the day.

Logistically, this took a little doing, but everyone was very happy to accommodate King’s request.

The family portrait dispels one of the biggest myths about fostering. People fear they’ll be heartbroken when it’s time to say goodbye, because they think they will never see the child again. At Angels Foster Family Network, 70% of all foster children are reunified with their biological families, and it is always the goal. But many foster parents continue to have relationships with the children, and their families, for many years to come. “A lot of people told us they could never be foster parents because they could never give the child back, but when you’re in the situation, you can see the positives of reunification,” says Fonda, as she slices strawberries for the youngest of the three boys at home. There’s King, who’s now in first grade, and a sibling set of toddlers. “Some people just need a reset,” she continues, referring to parents whose children are in foster care. “If you can help keep a family together, it’s a good thing.”

Fostering was initially Fonda’s idea, as she was a foster child herself in Miami, Florida. So when Pamela started talking about the couple having children, Fonda suggested fostering. “There are so many children who need homes,” Fonda says. Pamela immediately liked the idea, and was confident in her caregiving abilities, as she had been babysitting since she was 12 years old and was a nanny when she was in college.

Still, they had concerns. “The not knowing was scary,” says Pamela. “What if we got a medically fragile child? What if we couldn’t take care of the child? How do we interact with the birth parents?” They also wondered if they would face discrimination as a same-sex couple. “In reality, it was no big deal,” says Pamela with a laugh. “Our social worker gives us tips and advice on our foster children and on King,” says Fonda. Additionally, the couple connects with other foster families through the Angels network. Pamela adds, “Angels has meet-ups at parks during the day.”

They also liked that Angels connects foster parents with children under five years old, and requires families to foster one child or sibling set at a time, so children can get the attention they need.

As it turned out, Pamela’s and Fonda’s fears about interacting with biological parents were also unfounded. They have remained close to all of their former foster children and their biological families. They beam with pride when they talk about the biological mother of their first foster child, a baby girl. The mother struggled with addiction, but was able to begin to rebuild her life while her daughter was in Pamela’s and Fonda’s care. “She’s now in college and has a very healthy and strong family,” Pamela says.

Each foster child brings new joys and challenges to Pamela’s and Fonda’s lives. For example, as Fonda walks to the fridge to more get berries, the youngest child tracks her with his eyes, and assures himself aloud that she’s coming right back. “He likes for everyone to be together,” Fonda explains. And still, King needs a little extra time to adjust to changes in his routine. “If there’s a substitute teacher at school, he can act out, but he also has the biggest heart, and the behavior is very situational.”

As for saying goodbye, both Pamela and Fonda are very pragmatic, explaining that our society would be a better place if children had safe, loving foster homes to stay while their parents are given the time needed to get their lives back on track. It’s bittersweet, they say. Pamela says she’s been known to shed some tears when they’re least expected, like while watching Monsters, Inc. “When Sully and Boo said goodbye, I lost it,” she says. Fonda smiles and nods, remembering the first reunification of a foster child with her mother. She has a different reaction, though. “I look at it like this opens space for another child who needs us, and we never know what we’re going to get – a girl, a boy, what age? The wondering, it’s like Christmas Day.”

For more information about how to become a foster family, or how you can support foster families, please visit www.angelsfoster.org