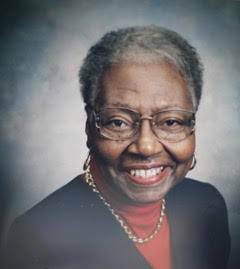 ennie Lee Miller Nash, she was born to Walter Miller and Lillie Wallace Miller on September 26, 1920 in Reagan, Texas. Bennie was the older of two children; she had a baby sister Beatrice. Little did the Miller sisters know, they would grow up to marry the Nash brothers! She received her primary education in Reagan, Texas and graduated high school in Houston, Texas. Her grandparents, Tom and Pearl Wallace played a significant role in raising Bennie and her sister. Her grandfather was the first Black sheriff in Reagan, he taught Bennie to drive at the young age of thirteen so she could be his “driver”. In 1939, Bennie started working as a nanny for a baby boy who would soon become her son, and the man who would become her husband. On May 15, 1941 Bennie married Monroe Nash, Sr., three more boys joined big brother John over the next eight years. Billy in 1942, Walter in 1944, and Monroe Jr. in 1949. Being the mother of four rambunctious boys kept Bennie on her toes, they were always involved in sports or eating! She always said her kitchen had a revolving door, she mopped her kitchen floor twice a day so if the boys dropped any food, they could pick it up and eat it! In 1958, Monroe and Bennie moved their family from Houston to San Diego, California. Bennie’s sister Beatrice was living there with her husband, Monroe’s brother. In 1958, Bennie began working for General Dynamics Convair; she remained there until she retired in 1979. Bennie was an excellent seamstress, a skill she learned from her grandmother. She could make anything without a pattern. This skill came in handy as she altered clothes for her growing boys. She even made some of the clothes for her son that soon grew over six feet four inches tall! In the early 70s, Bennie became affectionately known as “Gramma” to family and close friends. After retirement Bennie became an avid traveler, active in social and charity clubs, and also somewhat of a physical fitness “buff”. Bennie was also an entrepreneur of successful businesses; she was co-owner with her sons: Allstate Insurance franchise, Benjowali Winery, Cuzin Roe’s Catering. Bennie was a huge supporter of family; her home was somewhat of a “half-way” house for family and friends over the years. She loved entertaining and her jokes left everyone in stitches. Bennie was a member of Mt. Erie Baptist Church for many years. She later united with Grace Missionary Baptist Church where she became a “Mother” of the church. She was a faithful member until her health declined. As a woman Bennie possessed a strong sense of independence and courage, and she held a strong belief in God’s sovereignty. Her strength, independence and faith are her trademark and legacy. We saw it displayed everyday with her spirit for living life to the fullest, and her bold sense of festiveness. She didn’t care who you were or what your status was, if she felt you needed to hear it —— you were going to hear it! She trusted that her faith and belief in God was bigger than anything or anybody, and it would carry her through any circumstance presented. It carried her through racism, segregation and discrimination in the South. It carried her through love and death of family and friends. It carried her through other life tragedies including her own illnesses; she survived breast cancer not once but twice. After a lengthy illness Bennie was called home to rest and to get her reward on January 19, 2016. She slept away peacefully and painlessly. God knew she was tired and weary. She leaves to cherish her memory, her loving son Walter Nash, Sr. (Juanita), Daughter-in-law Betty Nash, Daughter-in-love Myrna Anderson. 8 Grandchildren, Martin Nash, Deedra Nash-Colston (Todd), Kevin Nash, Walter Nash, Jr., John Nash, Erecca Nash-Thomas, Dax Pierson, and Lykai Nash-Johnson (Matthew). 17 Great-Grandchildren; 4 Great-Great Grandchildren, and a host of nieces, nephews, cousins and many dear friends. Bennie is preceded in death by her parents, her husband Monroe Sr., her sister Beatrice, and three of her sons John, Billy, and Monroe Jr. What a Heavenly greeting she received!