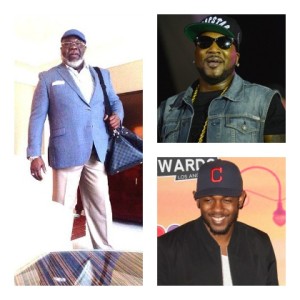 Bishop TD Jakes is taking on the rapper Young Jeezy for allegedly using his intellectual property.  The song at issue is a remix of “Holy Ghost,” featuring another rapper, Kendrick Lamar.   The song was released on Jeezy’s fifth solo album Seen It All: The Autobiography.

The song samples one of Jakes’ sermons, “Don’t let the chatter stop you,” and he’s not happy about it.   TD Jakes Ministries released a statement:

“SPECIAL NOTICE: The ‘Holy Ghost’ remix by Jeezy featuring Kendrick Lamar was produced without the knowledge or consent of T.D. Jakes, TDJ Enterprises, Dexterity Music or its associated companies. We are taking the necessary legal actions to stop the unauthorized use of T.D. Jakes’ intellectual property.”

Young Jeezy (aka Jay Wayne Jenkins), hasnt’ addressed the lawsuit in public.    But there are mixed opinions about whether or not rappers should have the right to use the intellectual property of pastors and those who do not agree with the message of the song.

Financial Juneteenth lessons from this story:

1) Rappers have long sampled each other’s music without paying for the use of intellectual property.  However, whenever hip-hop artists have used the property of entities outside the hip-hop music industry, there have been legal consequences for doing so.

2) Jakes may also be faced with the ethical implications of his message being used in an industry that regularly promotes the murder of young black men, sexual irresponsibility, drug/alcohol consumption and patent disrespect for women.  No one knows if this played a part in Jakes’ decision to take on the industry, but the time has long passed for the black community to have a conversation about the kinds of music that big corporations are promotely specifically to urban radio networks that influence the thinking of young black people.    Many of these messages are wired to teach black self-destruction.

3) Many people criticize Bishop Jakes for earning millions of dollars as a “Man of God.”  While this might appear to be an inherent contradiction, there isn’t a law stating that pastors have to be in poverty to prove their sincerity.  As long as Jakes is spreading a message that makes the world into a better place, it’s difficult to argue that he doesn’t deserve the opportunity to make money like the rest of us.
4) As black pastors are encouraged to interact with the world, more of these clashes are inevitable.  Megapastors, rappers, and athletes are among the most prominent members of the black community, and therefore have the ability to influence millions.  One might hope that the black church will play a key role in confronting some of the challenges being faced by the black community, including the effects of toxic hip-hop music.  Devone Holt, author of the book “Hip-Hop Slop,” is a perfect case-in-point.
(read more here)
Unlike many news organizations, Voice & Viewpoint delivers content that matters to you. Help us keep it that way by making a generous donation for as low as $2. Your support will fund local, investigative journalism for the community, by the community.