On November 9, 2020, the San Diego City Council held a special meeting discussing two items related to the Complete Communities initiative that was approved earlier this year. The initiative is the city council’s answer to the growing housing and climate crisis. Complete Communities plans to overhaul how housing is planned and wants to make affordable housing, public transportation, and well-kept parks accessible to every San Diegan.

The Council first voted on Complete Communities: Housing Solutions and Mobility Choices. A presentation by Heidi Vonblum, Deputy Director of the Planning Department, stated that “Since the 1990s, outside of Downtown and Otay Mesa, less than 5% of all development impact fees have been spent in communities of concern. Structural issues have created systemic inequities, resulting in lower investment in critically needed and deserved infrastructure. Inequities that will never change unless action is taken now.”

Vonblum argued that San Diego is one city with two realities; while some parts of the city are flourishing, others lack basic infrastructure like sidewalks and bike lanes. The Mobility Choices initiative plans to create a ‘one city, one reality’ mentality by creating two new sources of income for housing and mobility solutions, with at least 50% going solely for infrastructure needed in underserved communities. The hope is that this initiative will benefit the entirety of San Diego by making sure financial resources improve the city’s infrastructure, creating an equitable living experience for all. The council voted yes for all ordinances presented under Complete Communities: Housing Solutions and Mobility Choices, moving this initiative forward. 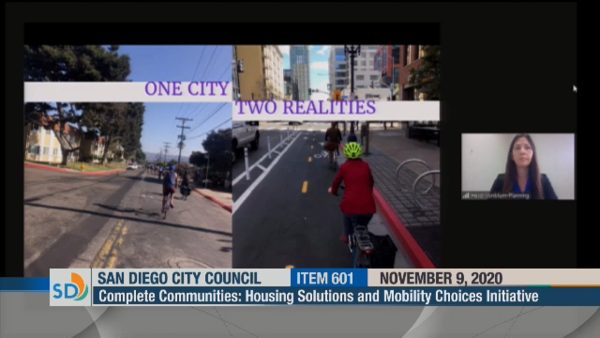 The second motion the council addressed was Complete Communities: Play Everywhere. This initiative would overhaul how San Diego creates and maintains parks, creating recreational areas needed in communities that have none. The ultimate goal of this plan is to provide more safe outdoor spaces and a higher quality of living for all San Diego residents. Despite Council President Georgette Gomez stating that “this item is extremely critical”, the Complete Communities: Play Everywhere initiative did not pass.

The complete overhaul of the San Diego Parks system was a controversial topic for council members. More than likely, after some reviews and amendments, this initiative will be brought back to be voted on again. Councilmember Vivian Moreno seemed optimistic for the future of Complete Communities, ending her ‘NO’ vote by saying, “I do think this policy is a huge step in the right direction. It needs to be looked at again to tweak some of the details. In addition, a policy of this level of importance that significantly changes existing city policy should not be rushed and passed at the last minute during a lame duck period. I would suggest bringing this back early next year.” She went on to say, “I do look forward to seeing it returned in the near future.”