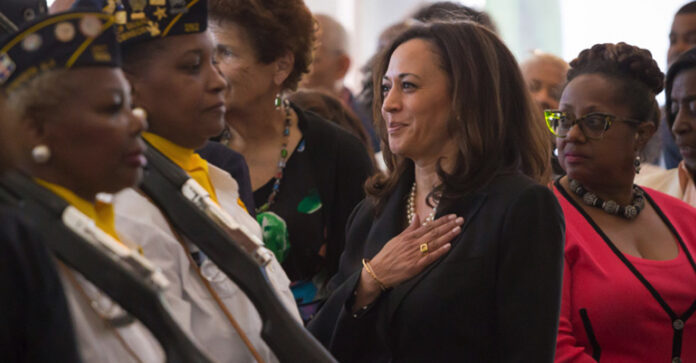 “I’m mad at the triple standard [Harris] has to face when it comes to her race and gender, putting food on the table and choosing a life partner. I’m mad that so-called allies are only allies when Black women are helping them to attain their goals and perfectly willing to throw us under the bus, once they’ve gotten there. I’m mad that the same folks who are now saying we need Harris at the impeachment hearings are unwilling and unable to see a Black woman in the highest office of the land.”

Yesterday, Senator Kamala Harris announced she was suspending her 2020 presidential campaign, because of low poll numbers and financial pressures. Unsurprisingly, this announcement came on the heels of a coordinated weekend media blitz of a leaked resignation letter by Kelly Mehlenbacher, a disgruntled staffer, who had unsurprisingly left Harris’ campaign to work with former New York City Mayor and billionaire, Michael Bloomberg on his newly announced candidacy.

Harris had announced in early November there would be widespread layoffs and an intense focus on Iowa so Ray Charles could see from the grave that the campaign was in trouble.

Pundits, news publications and political junkies treated Mehlenbacher’s letter like a smoking gun, which detailed how horrible of a work environment Harris created blaming Harris’ lack of leadership, focus and clear vision on how to win for the current state of affairs. Mehlenbacher laid Harris’ issues at the feet of the leadership (Campaign chairwoman Maya Harris and Campaign manager Juan Rodriguez), without detailing what role she may have played in the demise of the campaign as Director of State Operations.

Mehlenbacher’s job was to make sure the campaign was run efficiently by planning, executing, monitoring, evaluating, improving and correcting the systems and processes over time so the campaign could grow and scale as the candidate moved closer to the actual race. Only well-funded campaigns even have this position which is why Mehlenbacher may have cut her losses and bolted to Bloomberg’s campaign because that well-paid, position was about to be over.

Aside from the curious case of Mehlenbacher, what began as a promising U.S. presidential campaign ended with a whimper and the resignation letter was just the final nail in the campaign coffin of a Black woman constantly dogged by racism and sexism.

At a dinner party, I learned of the resignation letter and a friend asked me what my thoughts were. After reading it, I said I’m never surprised by a Black woman being undermined by a disgruntled white woman at work, especially when times get tough.

Yes, the campaign had problems, debate performances were uneven and voters needed more clarity on Harris’ health care plan, which she failed to communicate clearly. No, you cannot blame the ultimate failure of the campaign on the resignation letter. However, who wrote it, how it was received and used, played a significant role in the end of the campaign.

The willingness of people to immediately take the word of a disgruntled staffer over a campaign manager and chairwoman is telling. Mehlenbacher didn’t say anything in the letter anyone who has spent time working on or covering a political campaign doesn’t already know. When you run out of money, hard decisions must be made and when you fail to deliver i.e., raise enough money or put efficient processes in place, then sometimes what you may have planned is no longer viable. What she wrote isn’t a smoking gun, but simply status quo when it comes to political campaigns. The weight given that letter by the media was astonishing and the willingness to accept that Harris couldn’t lead a political staff let alone a presidential campaign was interesting.

Three of Senator Bernie Sanders’ top strategists left his 2020 campaign, citing creative differences the week after he launched his campaign in February and nada. No coordinated media blitz about how his campaign was over then or in October when the 78-year-old suffered a heart attack.

One disgruntled white woman essentially says, “I’m mad at Kamala because my job is harder than usual, life isn’t fair and the people in charge won’t do what I tell them to do,” and game over?

It wasn’t just the letter. It was also the idea that the letter was the final straw when folks have been coming for Harris over her racial identity and career as a prosecutor from the jump.

The continued pummeling of Harris by Black folk around being mixed-race and somehow less trustworthy because of it, is laughable. The fact that people hate her because she was a prosecutor when 80 percent of all prosecutors are white men is ridiculous.

Coupled with the fact that many who don’t trust her because she was a prosecutor, are riding with the white men who actually authored, introduced and voted for the crime bill that led to mass incarceration is disgusting.

As for Harris being a prosecutor – we can’t all be defendants. Having all white judges, prosecutors, lawyers and jurors worked so well for Black folk before those in power started allowing us to hold these jobs.

To lay an entirely broken justice system at the feet of one Black woman, when Black women activists, scholars and filmmakers like Jill Nelson, Angela Davis, Michelle Alexander and Ava Duvernay have been doing the actual work of raising awareness, confronting mass incarceration and actively working to change racist laws is unconscionable.

If it sounds like I’m having a tantrum, I am.

I admit that I am sick of agents of the state like Mehlenbacher and Tulsi Gabbard, who do the bidding of white supremacy and patriarchy and benefit from it while pretending to critique it. Women can’t get free because some women won’t get free.

I am sick of Black folks failing to learn from previous mistakes. If cancel culture had been in place when then Senator Obama was running for president, he would have never made it past early critiques of his Blackness and identity.

Until we realize the damage that is done when parroting the same reckless, white supremacist ideology, language and ideas around what makes someone Black, we will create unnecessary distractions from real issues that need our attention like Harris’ platform.

I’ve said it before and I’ll say it again, I’d rather see Senator Harris on the Supreme Court than in the White House — especially coming behind Mango Unchained — so I’m not mad that she didn’t get the nomination. I’m mad at how she was forced out while folks who have no business being in the race are still there. (See Independents Bernie Sanders and Michael Bloomberg for starters.)

I’m mad at the triple standard she has to face when it comes to her race and gender, putting food on the table and choosing a life partner. I’m mad that so-called allies are only allies when Black women are helping them to attain their goals and perfectly willing to throw us under the bus, once they’ve gotten there. I’m mad that the same folks who are now saying we need Harris at the impeachment hearings are unwilling and unable to see a Black woman in the highest office of the land.

I guess I wish that folks could see Black women the way they see infirmed white politicians on borrowed time and billionaires with little to no political experience.

I know that’s asking for too much in a country that is quite comfortable using the bodies and labor of Black women to literally become a global power while telling Black women to be happy singing in the background.

I’m mad that an entire political party needs Black women’s votes to win local, state and national office, but doesn’t care about the needs of Black women. I’m mad that Black people don’t realize that when we tear down our candidates over bullshit like parentage, it doesn’t take much more than a leaked resignation letter or bad press to finish her off.

Kamala Harris did not run a perfect campaign and no, she wasn’t for everyone. If you look at some of the candidates left in the race – one who talks in Blaxploitationese, one who just discovered racism exists, one who is so clueless about toxic masculinity that he sprays whipped cream into the mouths of adoring supporters and one who is boo’ed up with Trump and White Supremacy, Inc., then there is no reason why a candidate like Harris, despite her missteps, should be out of the race this early. Yeah, some of it is her fault, but it ain’t all her fault.

The relentless assault on Senator Harris will not be forgiven or forgotten at the polls or otherwise by a whole lot of women who look like me. Black women are not here to push everyone else over the finish line while we finish last. Not today or any other day and certainly not anymore.

This article was written by Nsenga K. Burton, Ph.D., entertainment and culture editor for NNPA/Black Press USA. Nsenga is also founder & editor-in-chief of the award-winning news blog The Burton Wire, which covers news of the African Diaspora. Follow her on Twitter @Ntellectual.