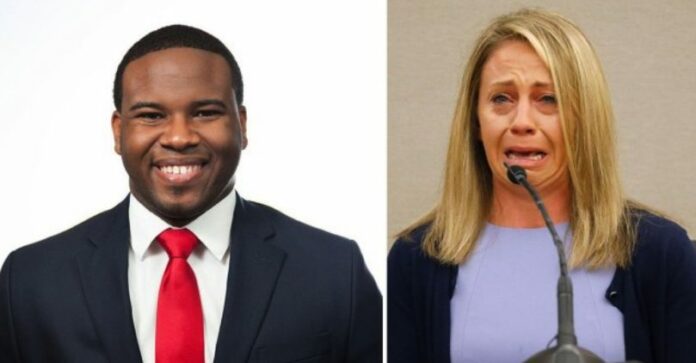 After deliberating her fate, a jury recommended a sentence of just 10 years in prison for Guyger’s assassination of her neighbor, Botham Jean. The judge upheld the sentencing recommendation. The 26-year old Jean was an accountant at the prestigious firm of Price Waterhouse Coopers at the time of his murder.

Many believe that former Dallas Police Officer Amber Guyger is a racist with a quick trigger finger. Her tweets and social media posts demonstrate a thirst for blood, and many observers believe that she represents white privilege at its most disgusting level.

Even after finding the defendant guilty after deliberating her fate for just three hours, the jury recommended a sentence of just 10 years in prison for Guyger’s September 2018 assassination of her neighbor, Botham Jean. The 26-year old Botham was an accountant at the prestigious firm of Price Waterhouse Coopers at the time of his murder. Judge Tammy Kemp upheld the sentencing recommendation.

“If you truly are sorry… I forgive you,” Brandt Jean, Botham’s 18-year old younger brother, told Guyger after the jury read her sentence.

“I think giving your life to Christ would be the best thing that Botham would want for you,” Brandt Jean said, before asking and receiving permission from the trial court judge to give Guyger a hug.

Unlike Brandt Jean, other family members weren’t so willing to offer Guyger forgiveness. At a press conference following the sentencing, Allison Jean, Botham’s mother, said, “My son’s life was much more valuable than ten years.” Then she shook her head and said, “but there’s nothing I can do about it.”

Later, during an interview with Anderson Cooper on CNN, Allison Jean shared that she did not know that her son Brandt was going to make the statement that he made. “So, I was very shocked when he did that,” she said to Cooper.

During the live broadcast of the hearing, protestors outside the courtroom could be heard yelling, “No Justice, No Peace,” from within the courtroom itself.

Activist Dominique Alexander said the sentence was much too light and called for additional protests.

Jean family lawyers said they’ll need to consult with their clients to determine where to go from here, including whether or not to push for federal charges against Guyger because of the comparatively light sentence.

It was a little more than one year ago that Guyger entered Botham Jean’s apartment and shot him for no apparent reason other than he was sitting in his house while black.

During the sentencing hearing, a series of text messages sent and received by Guyger were displayed in court for the jury and the world to see.

The picture painted by her words in those messages was ugly and Klan-esque, particularly from someone who is supposed to protect and serve all citizens.

They were egregiously disrespectful to African Americans and all people of color.

“When does this end, lol,” read a text sent to Guyger purportedly from another officer on duty.

Later that year, Guyger received another text about the prospect of adopting a German Shepherd.

“Although she may be racist,” the individual texted to Guyger.

“It’s okay,” Guyger responded. “I’m the same. I hate everything and everyone but y’all.”

The conversation took place six months before she shot Jean to death.

“Damn, I was at this area with five different black officers. Not racist but damn,” Rivera texted.

Guyger couldn’t resist in her reply: “Not racist but just have a different way of working, and it shows.”

If the text messages weren’t enough to show the kind of cop Guyger was, and what kind of person she is, Guyger’s Pinterest posts left little doubt.

She captioned one post of her with a military sniper weapon this way: “Stay low, go fast; kill first, die last; one shot, one kill; no luck, all skill.”

Another Pinterest post of Guyger’s reads: “I wear all black to remind you not to mess with me because I’m already dressed for your funeral.”

In that post, Guyger brandishes a gun, gloves, and a shovel. She wrote: “Yah I got meh a gun, a shovel, and gloves. If I were u back da f— up and get out of meh f—–g way.”

In still another post, Guyger wrote, “People are so ungrateful. No one ever thanks me for having the patience not to kill them.”

During the trial, Guyger said she was tired after working a long shift when she returned home on September 6, 2018.

She said she approached what she believed was her apartment and found the door partially ajar. Guyger said she saw a man inside the apartment and thought he was an intruder. She was still in uniform and shot Jean to death.

Because her unit is one floor below Jean’s, Guyger tried to explain that as the reason for the mix-up. For jurors, she couldn’t explain why she’d execute a man who was sitting on his couch, eating ice cream, and watching television.

Although she claimed to have yelled, “Let me see your hands,” neighbors testified that they never heard her utter such a command. The only sound they heard was the gunfire: Guyger shooting an unarmed man.

Guyger’s conviction and imprisonment appears part of a new trend where law enforcement officers are facing the music for crimes against unarmed individuals of color.

Robert Bates, a white Tulsa County, Oklahoma volunteer sheriff’s deputy, was sentenced in 2016 to four years in prison for second-degree manslaughter in the 2015 death of Eric Harris, 44, who was unarmed and restrained.

Peter Liang, a rookie police officer in New York City, was convicted of manslaughter in 2016 in the 2014 death of 28-year-old Akai Gurley.

Gurley, who is black, was walking down the steps of his apartment building when a startled Liang panicked and open fire.

A judge reduced the conviction to negligent homicide and sentenced Liang to five years’ probation and 800 hours of community service.

Former Balch Springs, Texas, Police Officer Roy Oliver was convicted of murder in August in the 2017 death of 15-year-old Jordan Edwards and was sentenced to 15 years in prison.

Oliver, who is white, fired his weapon into a car packed with black teenagers, killing Edwards.

Slager was sentenced to 20 years in prison in December 2017.

Olsen, who is white, is accused of killing Anthony Hill, a 26-year-old black man and military veteran who was unarmed and naked at the time of the shooting.

It took jurors less than a day before convicting Guyger who was taken into custody immediately following the verdict.

“For black people in America, this verdict is a huge victory,” said Lee Merritt, one of the attorneys representing the Jean family.

“Few police officers ever face trial for shooting deaths, and even fewer are convicted,” Merritt stated.

He added that the verdict shows that justice is finally coming for the family of victims.

“Police officers are going to be held accountable for their actions, and we believe that will begin to change policing culture all over the world,” Merritt told reporters.

Civil rights attorney Benjamin Crump, who also represents Jean’s family, said it was important to remember that there’s a list of unarmed African Americans who have been killed by police officers.

He said the verdict against Guyger was a welcome shift in the nation.

“For so many unarmed black and brown human beings all across America, this verdict is for them,” Crump stated.

The Black Struggle in 2019: Staying Aware, Facing Injustice and Fighting for the Future