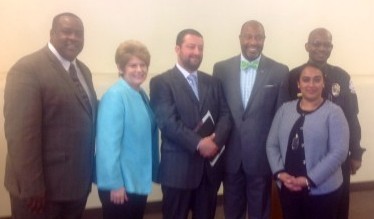 The San Diego District Attorney, Bonnie Dumanis, sponsored the Cultural Awareness Dialogue Luncheon celebrating 10 years of her Inter-Faith Advisory Board. This group of religious leaders consisting of Pastors, Imam’s, Chaplains and Ministers, have played a major role in helping the district attorney bring fairness to one of the most important arms of the criminal justice system.
The success of the diversity involved in this effort could be found in the cross section of San Diego’s religious and ethnic community present. Gagandeep Kaur, of East Indian decent provided a moving opening prayer; Re. Gerald Brown of the United African American Ministerial Action Council (UAMAAC) served as moderator laying our the goals for cultural awareness dialogue which was evidenced in the presentations that followed. District Attorney Bonnie Dumanis gave a welcome and Board overview. She acknowledged the many successes of the group in working with communities throughout San Diego County.
Gagandeep Kaur spoke of the issues of dress, culture and gender interaction in the East Indian community that should be observed when dealing with individuals or families; she also spoke of how important it is not to assume that everyone is the same just because of their dress. Imam Taha Hassane, spoke of the 100,000 Muslims in San Diego County from more than 20 Masque speaking different languages and of different cultures, but yet the same Islamic Faith. It is important for law enforcement personnel to understand these differences so as to deal with people in an intelligent and human way. It was suggested that perhaps there is a need for a full day conference to continue what the luncheon started to address in the short period of time set aside for this luncheon.
Police Chief Shelley Zimmerman of San Diego spoke of the meetings and efforts of her department as she takes the reigns of leadership; For San Diego Assistant Chief and National City Police Chief now serving as head of the Bureau of Investigations for the District Attorney’s Office spoke of the importance of his office in conducting investigations of matters referred to them to insure fairness that in some cases has resulted in the dismissal of charges because of additional information. Mack Jenkins, Chief, San Diego County Probation Department spoke of the role of probation in the criminal justice process; Chaplain Gerald Johnson of the Oceanside Police Department and member of the Iner Faith Advisory Board from its inception, spoke of the opportunities presented with his job to help both people and the system. At the same time Rev. Jesus Sandoval spoke about the Latino Culture and Rev. Chuck Norris spoke of the Christian Faith and African-American Culture. He spoke of the degree to which process of social pressure wears on the souls of Black Folks; the problems of stereo types which have been written into our culture often catch law enforcement as an instrument of the problem.
JJ Anderson of the District Attorney’s Office was acknowledged as the “go to person” when in doubt and in search of information from the D.A.’s Office. This event which was held in the Santa Fe Room of Baloa Park with its cross section of participants including Rabbi Laurie known for her commitment and work for social justice, was a success by all measures. District Attorney Dumanis is perhaps the only one in the nation among her peers with such a working effort like the Inter-Faith Advisory Board.