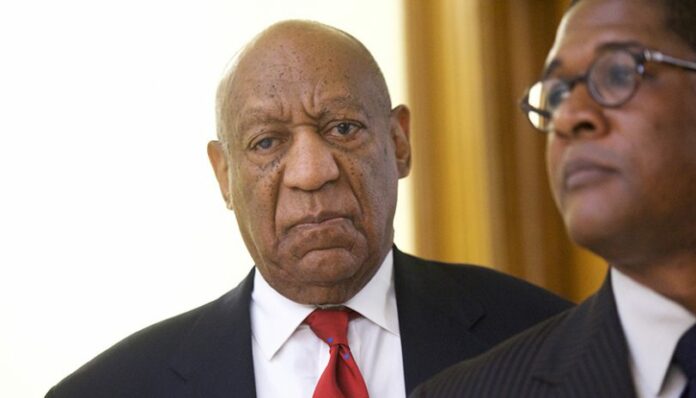 Chavis noted that mainstream media’s coverage of the trial lacked facts, and the racially and politically-charged atmosphere inside and around the Pennsylvania courthouse may have deprived Cosby of a fair trial.

On the first anniversary of his imprisonment, Bill Cosby received a visit from Dr. Benjamin F. Chavis, Jr., the renown civil rights leader and lead-member of the famed political prisoner group known as the Wilmington Ten.

Chavis, who is the president and CEO of the National Newspaper Publishers Association, the trade organization that represents the Black Press of America, joined Cosby’s longtime crisis manager Andrew Wyatt for a visit with Cosby.

It was Chavis’ third visit with the fallen icon, who has refused to meet or speak with representatives from any other news organization.

The meeting took place at the request of Cosby, who in 2018, received a 3-to-10-year prison sentence following his conviction on charges of aggravated indecent assault.

During the visit, Chavis said he prayed with Cosby and discussed a range of topics from health and family, to his conviction and the pending appeal.

While Chavis said details of what he and Cosby discussed are personal, the visit reminded him of the near decade he and the other members of the Wilmington Ten spent behind bars.

“The conditions inside all prisons in America are architecturally designed and standardly built to breakdown and suppress the spirit and emotions of those in prison,” Chavis stated.

Asked why it was important that he visit Cosby, Chavis said the issue is more significant than Cosby.

“The Black Press of America maintains a proud tradition of not only exposing the various injustices that are done to Black America but also it is our tradition to be an advocate for those who have been unjustly labeled as outcasts,” Chavis stated.

During the visit, Wyatt and Cosby both praised the Black Press for its coverage of Cosby’s trials.

“Mr. Cosby said that he appreciates that the Black Press was the only African American media at both trials every single day,” Wyatt stated.

“Mr. Cosby never asked for favors, and he only asked that the media would treat him fairly and look at the facts. Thanks to Dr. Chavis who sent his reporter there, Mr. Cosby remains grateful to the Black Press for its fairness,” Wyatt said.

Chavis has long held an interest in the Cosby case.

As a civil rights activist, Chavis was concerned about numerous unconstitutional rulings by the trial judge in the case.

Further, tactics used by prosecutors during jury selection, opening and closing statements, and throughout the trial proved troublesome for most courtroom observers.

Before the start of the second trial last year, one juror who’d just been selected to serve on the panel told other potential jurors, “We can all go home, he’s guilty.”

That should have disqualified the juror, but the trial Judge Steven T. O’Neill rejected defense arguments to remove him.

Another juror admitted that she was friends and neighbors with the court reporter, who serves as an employee to the judge. O’Neill refused to recuse that juror.

One other juror said he had a “personal relationship” with one of the detectives who investigated Cosby, and he too remained on the panel despite defense objections.

Additionally, Assistant District Attorney Stuart Ryan shouted out in court that he was “tired of this black s..t,” which set the tone for the racially-charged trial.

“They already have their one. What more do they want,” Feden stated within earshot of the judge, lawyers, and media.

Chavis noted that mainstream media’s coverage of the trial lacked facts, and the racially and politically-charged atmosphere inside and around the Pennsylvania courthouse may have deprived Cosby of a fair trial.

He’s currently awaiting a ruling from the state Superior Court, which heard oral arguments from Cosby’s attorneys, prosecutors, and the state attorney general in August.

Meanwhile, Chavis said Cosby is using his time in prison to help others.

“As the Wilmington Ten discovered, Bill Cosby is not serving time. He is making time serve the liberation of the minds and consciousness of his fellow inmates through mentorship, spiritual, personal, and collective development sessions,” Chavis stated.

“His spirit, mind, body, and soul are strong and getting stronger each day. The fact that he is blind has not handicapped him or prevented him from maintaining his integrity, self-worth, value, and intellectual genius.”

“The systematic injustice of his racially-motivated and orchestrated charges, trials, conviction, and imprisonment pending his appeal,” Chavis stated.

“I know this from firsthand experience with the unjust incarceration of the Wilmington Ten political prisoner group in North Carolina during the 1970s,” Chavis continued.

“The Wilmington Ten were officially declared political prisoners by Amnesty International and by the United Nations. The Pennsylvania prison that Bill Cosby is now unjustly imprisoned exemplifies the prisons that are designed to break the spirit of those in there,” Chavis said.

“It is important for Black America to know that mass incarceration is not the end. Bill Cosby is showing that you can promote personal and collaborative transformation inter-generationally,” Chavis said.