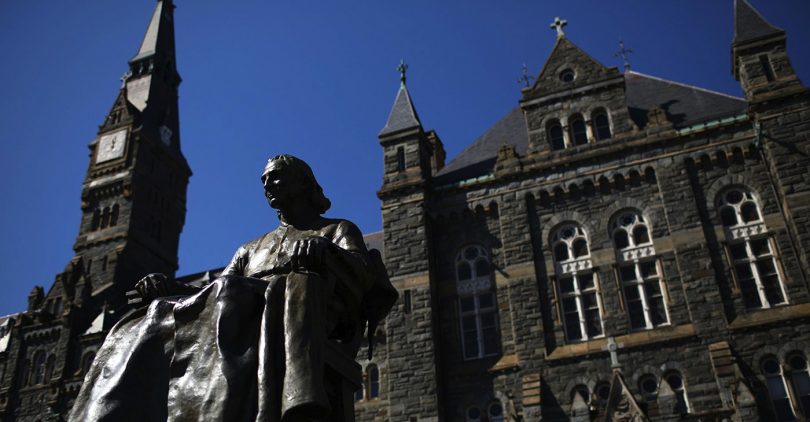 Georgetown University could become the first college in the nation to mandate a fee to benefit descendants of slaves sold by the university nearly 200 years ago – a debate, as first reported by ABC News, that takes place against the backdrop of a broader political conversation unfolding on the 2020 presidential campaign trail about reparations.

By almost a 2-to-1 margin, students approved the measure, which still must be approved by the university to go into effect.

If the university does approve the plan, it would be one of the first major American institutions to provide financial restitution for its role in slavery.

The school’s undergraduates voted Thursday, April 11, on the referendum, which would increase tuition by $27.20 per semester to create a fund benefiting descendants of the 272 slaves sold to pay off the Georgetown Jesuits’ debt – a move that saved the university financially.

In a statement, Todd Olson, vice president for student affairs at Georgetown University, praised the students’ efforts saying the “university values the engagement of our students and appreciates that 3,845 students made their voices heard in yesterday’s election.”

“Our students are contributing to an important national conversation and we share their commitment to addressing Georgetown’s history with slavery,” Olson said.

Reparations have become a major platform for Democrats seeking the 2020 presidential nomination.

But, it’s long been a topic among African Americans whose forefathers were tortured, abused and enslaved by European Americans during the transatlantic slave trade.

Like many of the nation’s other acclaimed colleges and universities, Georgetown was complicit in the slave trade.

In 1838, Maryland Jesuits sold 272 enslaved individuals to help prevent Georgetown from shutting down.

A 2017 report revealed that dozens of American colleges and universities had begun investigating their historic ties to the slave trade and debating how to atone.

Profits from slavery and related industries helped fund some of the most prestigious schools in the Northeast, including Harvard, Columbia, Princeton and Yale, according to the report.

And in many southern states — including the University of Virginia — enslaved people built college campuses and served faculty and students.

In 2018, the University of Virginia (UVA) organized a consortium called Universities Studying Slavery (USS) that brought together over 40 colleges and universities across the country and world to share resources as they confront the role of slavery and racism in their histories and its impact today.

USS reportedly began as an informal working group between several Virginia institutions undergoing similar initiatives to research and be more open about their relationship to slavery and slave labor.

“As an alumnus [of Georgetown], I supported the plan for paying reparations 100 percent,” Lynda Gage wrote on Twitter. “It is awesome that the students are supporting this initiative.”