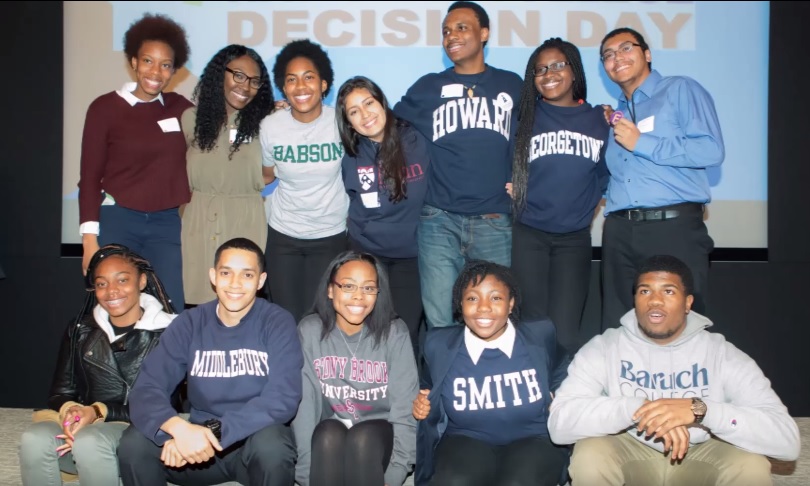 NEW YORK – Shay Stinson was a quiet 8-year-old girl, raised by a single mom in Harlem, when her first trip outside of the city took her past the bluish Catskill Mountains. She was captivated. From then on, she dreamed a life that would take her far from the gray concrete community of her birth.

But a dream without a plan is just a dream.  She needed a ladder up and out, and she found it at the Harlem Educational Activities Fund. HEAF provides after-school enrichment and guidance to low-income students in New York City. “I attribute most, if not everything, to HEAF,” said Stinson. “HEAF exposed me to a wealth of resources.”

“We build high aspirations for the future and have each participant set clear goals,” Rose said. “It can change along the way, but they must have a goal.  And then we teach self-discipline to make change.”

“What sets HEAF apart from any other program is the emotional and social development provided to each child, because they are not getting this in the public schools,” said Dr. Fern Khan, a HEAF board member and retired educator from Bank Street School.

HEAF quietly has used this formula to help thousands of students succeed since 1989.

HEAF’s Harlem learning center has been based in the historic former Hotel Theresa since 1991. Through the 10th-floor windows, students see Harlem’s skyline and construction sites. Some 100 feet below, sidewalk vendors hawk their wares and street musicians play for coins as the crowds thread perpetually through the menagerie. Sometimes, Stinson would stare out of the window at the crowd below–but not for long. As she was constantly reminded, there was work to do.

This is where Stinson gained the tools, contacts and self-discipline that she needed to succeed.

After high school, Stinson was accepted by Temple University in Philadelphia. On a visit from college, she was asked to give a presentation to HEAF’s board of directors. She said that she had to be three people to prosper.

Brigadier General George Price (retired), a HEAF board member, was impressed with Stinson’s description of three personalities that she created to handle the transition from Harlem to Temple and beyond. “Many of these students have to develop a personality at home where they are not readily encouraged,” said Price. “Then they have to deal with the street and show they are not oddballs for being smart in school. And lastly, they have to deal with the mainstream.”

After Stinson’s presentation, Price became her mentor and guided her through Temple’s law school and then on to a military career. She now is stationed in Germany as an Army Major in the Judge Advocate General Corps.

Veronique will be challenged before long by HEAF’s College Quest, which prepares students for the Scholastic Aptitude Test, provides university tours and offers financial-aid counseling.

Every single HEAF student graduates high school, and nearly 100 percent of them reach college. Nationwide, less than 20 percent of black and Hispanic high school graduates enter college, according to the National Center for Education Statistics.

HEAF does not stop there.

HEAF will provide academic support to 560 under-served students this year. HEAF enrollees are 69 percent black, 30 percent Hispanic and 1 percent other.  Family incomes are below $50,000 annually for 75 percent of enrollees.

HEAF generates nearly half of its $3 million annual budget at a gala event each October. Individuals and foundations donate nearly the entire other half. Government provides only 1 percent of HEAF’s funds.

HEAF’s program is free to New York City students who maintain an 80 percent GPA, score at least 75 percent on the Math and English Regents exams (a voluntary New York State exam) and earn at least a 2 out 4 on the state’s standardized tests. HEAF interviewed 72 potential fifth-graders and accepted 51 last year. Its waiting list numbers more than 100.

“We keep pounding away on the idea that life is a marathon run,” HEAF founder Rose said. “We get them to sprint every day. And, lo and behold, you have won the marathon.”