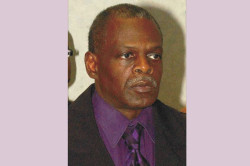 On March 22 after a 36-year career with the Pittsburgh Bureau of Police, former Police Chief Nathan Harper was indicted by a federal grand jury on five counts for conspiracy, theft of public funds and tax evasion.

“We (PBP) are saddened to learn of the Federal indictments against former Police Chief Nathan E. Harper,” said a statement released by the bureau following the indictment.

According to the indictment, Harper is being charged with one count of conspiracy for the personal use of nearly $32,000 in public funds and directing unnamed police personnel to deposit approximately $70,000 into unauthorized accounts at the Pittsburgh Federal Credit Union.

“These are serious charges,” said U.S. Attorney David Hickton at a press conference announcing the indictment. “The allegations represent the worst kind of public corruption, the theft of public funds by a person in a position of high public trust, a critical position of public safety, in this case, the police chief of Pittsburgh.”

The funds used by Harper came from the city’s secondary employment program for entities wishing to hire off-duty police officers. These entities must pay a $3.85 administrative fee to the bureau for scheduling of off-duty officers and some of these checks were deposited into the credit union accounts.

The indictment details a list of transactions using the credit union account from March 2010 to December 2012. According to the deposit list, checks began being diverted from the bureau in September 2009 and the last one was deposited in October 2012.

“Some examples (of purchases) were an XM radio for his car, a ladder. Another example was kitchen appliances, and there was plenty examples of food and beverage, alcohol,” Hickton said.

Harper is also charged with failing to file tax returns from 2008 through 2011. Harper’s lawyers say he intends to plead guilty to all charges.

“He is embarrassed and sad and humbled and contrite, and all those emotions that accompany a police chief who for 36 years had a distinguished career and is now tarnished by a federal indictment,” said Robert Del Greco, one of Harper’s attorneys at a press conference following the indictment.

Harper is facing up to nine years in prison and possibly $650,000 in fines. However, his attorneys believe he will receive a lenient 10 to 16 months and possibly be placed on house arrest. It is unclear if Harper will retain his city pension.

There are many unanswered questions following the indictment. The federal documents describe bureau employees who directed the checks from the secondary employment program into the credit union accounts. It is unclear whether these individuals will be charged.

In addition, eight individuals were assigned Visa cards for the credit union account. Bodyguards for Mayor Luke Ravenstahl have been identified as recipients of these cards, but it is unclear if they, or others in possession of the cards will be charged.