In February, J. Luke Wood, researcher and San Diego State University(SDSU) Distinguished Professor of Education, co-hosted a Black Minds Matter webinar to address disproportionate suspensions of African American children and youth in California schools and unveil the newly published report he co-authored, Suspending Our Future. Here, the Voice & Viewpoint interviews Dr. Wood to help unpack the report, for parents and families, along with some suggestions from Dr. Wood on parent advocacy. You can access the report at https://bit.ly/3at2HWa,

Luke Wood (LW): It started at SDSU, after the killing of Alfreda Longo. Black Lives and Black Minds are intertwined – so we decided to do a public course looking at the parallels between policing and schooling. Now it’s part of a larger coalition effort with BME, Black Men for Education Equity. We are trying to push some legislative efforts. The webinars are ongoing.

VV: Your report is an outgrowth of all these efforts, right? Some things that stood out to me were the 3D Effect, the Our Voices Project, the reality of suspensions versus expulsions and the use of restraints and seclusions in the schools. A few schools in San Diego Unified made your “Top 50 Suspension Schools for Black Students” list.

LW: San Diego Unified is emblematic of what we see across the state. There are schools that certainly stand out, Montgomery Middle being one of them. But it’s interesting…about the seclusions and restraints …There was a teacher who called me. She teaches in San Diego Unified. She had read the report and she wanted to detail to me how she’s seen the use of seclusion in her own environment and how this is important. Most of this doesn’t ever get documented.

LW: The Our Voices Project [is] focused specifically on preschool through third grade experiences, what the parents have to say about their experiences. The patterns are very, very clear. Most of the responses we received were, “I didn’t realize this was happening to other people too.” There’s a sense of empowerment that comes from it. 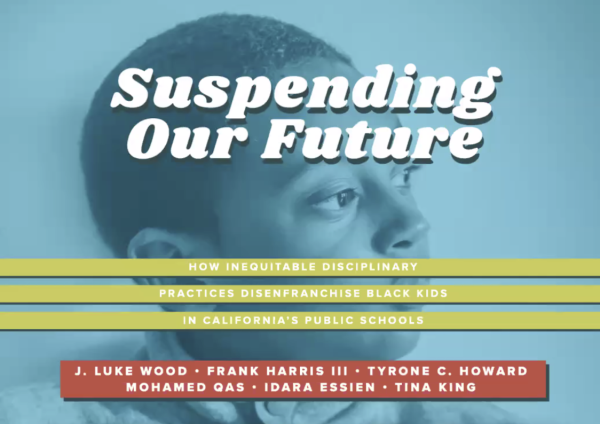 VV: So what should parents know?

V&V: What labels are red flags for parents, say during parent teacher conferences?

LW: Physical, hyper, aggressive, defiant, troublemaker, bad. Those would be the most recurrent ones. And, “actually smart”, that’s usually a red flag. “Sarah is actually smart.” That comment should tell you everything you need to know about that environment.
So, you’ve got four boys throwing rocks. One child gets pulled out. It’s a black child who gets a referral. And then when they’re subjected to discipline, the discipline is often harsher and more prolonged. So, one child gets a referral. The black child gets a suspension. If there is a suspension, if, let’s say two children get suspended, one child gets suspended for one day, the Black child gets suspended for three – for the same incident. Those are the patterns to look for.

Never leave your child in an unhealthy environment, even for the sake of a “good school.” Also, never assume that the school’s discipline is right. Inquire.

LW: Yes. Any type of advocacy can conveniently be turned into the parent being criminalized too. They feel “uncomfortable in the room” with the parent.

V&V: What can parents do?

LW: Never do it on your own. It has to be in collaboration with multiple black parents. Things get elevated so quickly, even when you’re talking to someone in a very respectful way. We see it all the time.

V&V: These patterns are evident throughout the grade levels?

LW: Definitely. The qualitative data we collected is all preschool through third grade. We tried to look at these patterns in early childhood because we know that they take place throughout the rest of the pipeline. In my experience, no one seems to care when we get to middle school and high school issues. In their minds, it’s like, “Oh, well, they deserve it.”

V&V: Is there a different strategy for parents in middle school and high school?

LW: No. I think the strategy is the same, you work with other parents, so it’s not just you. They have to know that you’re not going away. Most schools try to do short-term fixes. Here are the three short-term fixes [to watch for]: If the school says they’ll release a statement; if the school says they’re going to bring in someone to do some research; or if they’re going to form a committee or a task force. Those three things never produce anything. Now I’m a researcher. I believe in doing data collection. But I also think that that is not a strategy to further inform [what is] in place. It has to be more substantive.

VV: What have you seen with San Diego Unified?

In Montgomery Middle, they suspend over 35% of their Black students. Millennial Tech, 30%. Rodriguez Elementary, 27.8%. Roosevelt International, 27.7%. I can give you 30 schools that have at least a 12 percent suspension rate, and that’s not including all the alternative and special ed. or community day schools.

With San Diego Unified it’s not just looking at the suspension rate, it’s also looking at the climate. Overwhelmingly our experiences, in the Our Voices Project listening narratives from parents, has shown those same patterns: perceived with distrust, disdain, and disregard. Hyper-surveilled for wrongdoing, assumed to be troublemakers, labeled. It’s all taking place in San Diego Unified. In our region, [San Diego] Unified is not the absolute worst. We’ve got to think about Poway and we’ve got to think about Grossmont. Grossmont has one of the worst expulsion rates I’ve ever seen.

V&V: What efforts are you involved in?

LW: We’ve been doing some collaboration with the local NAACP and just trying to get as much information to parents as we can. We have The Friend of the Family program to provide support, giving people the coaching they need. Telling them, “When you walk into the room, expect to hear this.” “This is what they’re going to say, and when they say this, here should be your response.” Just walking people through so that they know what to expect. It gives people just a bit more of a sense of power in a situation where they feel disempowered.

V&V: When you look at the data, it can be discouraging. It’s incremental change.

LW: Yeah. Here’s a perfect example. A parent calls and says, “Hey they tested my child for special education. They had somebody come in and do an assessment, and now they want me to basically have them be tested for special education formally.” I said, what do you mean? They tested them for special education informally? That’s not legal. You can’t do that. The parent has to consent to that. There’s a process. So, it’s arming someone with information to be able to say, “Well, my understanding is that the law says that you should have given me a phone call and we should have had a conversation. I should have signed some paperwork before this.” That makes the school a little bit more careful.

I do think that more parents could have good experiences if we work together. You know, in reality, as I mentioned before, we have to, or else it will be framed as “the one bad parent who’s a troublemaker,” who gets barred from coming to campus. We see that all the time.

LW: BMMCoalition.com. That’s where we have the suspension reports, the reports on race lighting and the education support.