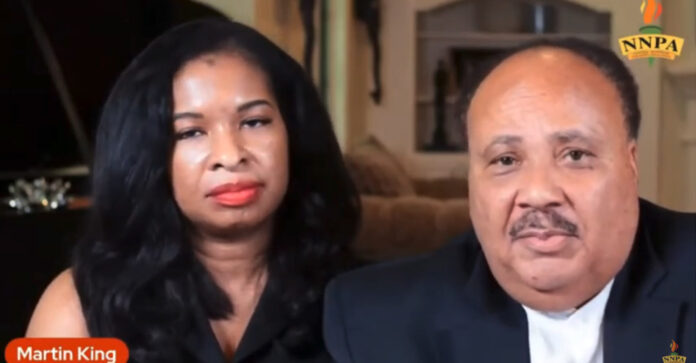 In 1963, more than 250,000 people marched on Washington, D.C., for jobs and freedom with Dr. Martin Luther King Jr. Nearly 60 years later, Martin Luther King III helped lead a massive march on the nation’s capital. This time the objective focused on voting rights. “John Lewis told us that the most powerful nonviolent tool we have is voting rights,” King told the National Newspaper Publishers Association (NNPA) during an exclusive interview broadcast over the social media channels of the Black Press of America.

The NNPA is the trade association that represents the Black Press of America. “We are in a battle to protect our most sacred right,” King continued. The oldest son of the late civil rights leader called the more than 400 voter suppression bills in GOP-led states a reaction to the massive voter turnout in Georgia and other places that helped Democrats gain control of both chambers of Congress and the White House.

King and his wife, Arndrea, said part of their mission is to register new voters and fight suppression laws. “The 400 pieces of legislation introduced since January are a reaction to the massive voter turnout, we saw last year and is a preparation for 2022,” said Arndrea King, a national merit scholar who studied psychology at Emory University. “If people come out and make themselves heard and press for federal protection, for the John Lewis Voting Rights Advancement Act, we can stop this,” Arndrea King insisted.

“The Black Press is so important. We understand that the reality is that so many people depend on getting their news from the Black Press even though we have moved toward social media outlets.” NNPA President and CEO Dr. Benjamin F. Chavis Jr., who worked with Dr. King and Coretta Scott King, said he remains impressed by the King family and their staunch activism for freedom, justice, and equality. “Martin Luther King III and Mrs. Arndrea King together exemplify the loving, transformative freedom-fighting husband and wife team that America and the world surely admire,” Dr. Chavis remarked.

“The Black Press of America acknowledges and supports the King family’s continued leadership, vision and commitment to freedom, justice, and equality,” Dr. Chavis added. The couple said passage by the John Lewis Voting Rights Advancement Act would provide federal protections to voters that suppression laws have removed. They called the current push urgent and said Democratic lawmakers should strongly consider abolishing or setting aside the filibuster that maintains most laws need 60 votes – or at least 10 Republican supporters – to pass in the Senate.

“The vast majority of Americans support voting rights legislation, and we know the voter suppression laws target the Black and Brown community, but this is a problem for all of us,” Arndrea King stated. “In a lot of ways [Dr. King] saw this. Before his assassination, he said the first phase of the movement was civil rights, and the second phase would be genuine equality. We see mass mobilization across the U.S., and people are saying it is time for genuine equality, and that starts with access to the ballot box.”

Martin Luther King III called the filibuster a relic of the past. “Just like the [Confederate] statues were standing in the way [of progress], we know the filibuster was put on the books to keep civil rights bills from passing,” King declared. “Relics have to be removed. The filibuster has to be removed.” While some are reluctant to abolish the filibuster, King noted the hypocrisy.

“If we can do something like confirming Supreme Court Justices to lifetime positions with 51 votes, can’t we carve out a section for our most precious right, the right to vote? So, the filibuster is ultimately a relic of the past, and it’s not necessary,” King concluded.