Home National Millennials must answer ‘How will you lead?’ 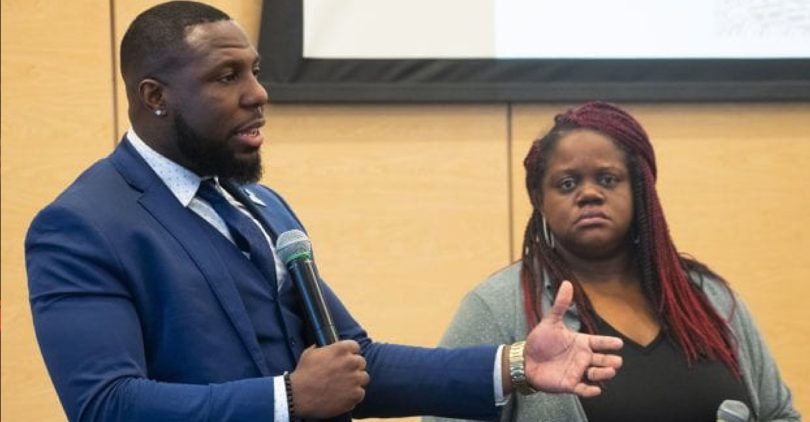 Charlottesville, Va. City Councilman Dr. Wes Bellamy and Lea Webb talk to attendees during one of the last sessions at the “Black Millennials Unbossed & Unapologetic Summit” at the National Civil Rights Museum. (All photos: Karanja A. Ajanaku) 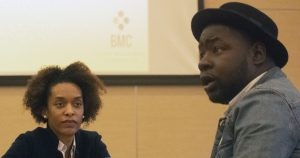 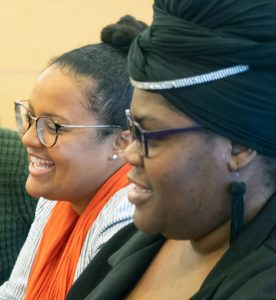 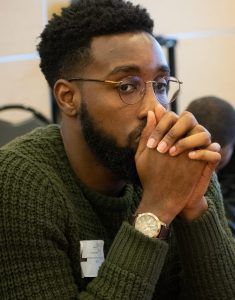 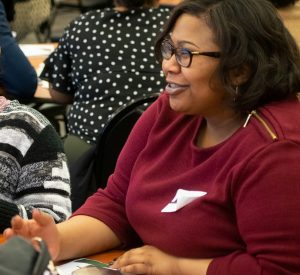 By John Semien, Special to the New Tri-State Defender

“Nobody can do this for us but us.”

To Dr. Wes Bellamy, a city councilman from Charlottsville, Va., that statement by Dr. Martin Luther King Jr. is the rendezvous point for picking up where King left off in the fight for social justice for all.

Calling King “one of the most thought-provoking people to walk the earth,” the 32-year-old Bellamy – the youngest council member in Charlottesville’s history – drew upon King to put his comments to the group in context.

“Believe in yourself and believe that you are somebody … nobody can do this for us. No document can do this for us…If the Negro is to be freed, he or she must reach down into the inner resources of his own soul and sign with the pen and ink of self-assertive manhood their own emancipation proclamation. Don’t let anybody take your manhood or womanhood for that matter. Be proud of your heritage. We don’t have anything to be ashamed of.”

Bellamy, the summit’s keynote speaker, was thrust into the spotlight in 2017 when he led efforts to remove a statue of Confederate General Robert E. Lee from a city park. A deadly encounter involving white supremacist protesters and counter-protesters ensued, with three people killed and more than 30 injured.

The summit in Memphis built upon the first such gathering held in Washington, DC, last year. Bellamy told about 100 attendees that he wanted to get the language right today. …I want to get the language so right that everyone will say, ‘yes I’m black and I am proud and beautiful.’”

King, said Bellamy, was “about the message that we are good enough.”

Acknowledging that some older folks say millennials “don’t want to do nothing,” Bellamy said, “we’re here, we’re leading, we’re standing and we’re acting because we are good enough. …The old adage ‘wait your turn’ is one I often have a problem with.”

Some considered leaders of the community seem bent on maintaining the status quo to maintain a position or a title, he said. Zeroing in on millennials, Bellamy said, “If we want to break the mold of how leadership should be or how it is conducted, then we have to be the ones who lead.

“How will you lead is now the question. That is a question that only you can answer for yourself.”

Bellamy said he is disappointed that Memphis, a predominantly black city that had black leadership for many years, now has someone who “doesn’t look like us.”

Not calling Mayor Jim Strickland by name, Bellamy said, “I don’t know your mayor. I can’t say if he’s a good man or a bad man. But I know he doesn’t look like any of the folks in this room and I wonder why.

“I wonder what will we do, but more importantly what will you do? Is it enough to have leadership that looks like us? Or should the next step be to have them push for policies that change things in our communities?”

Black leaders in the limelight need help and support from community leaders and organizers to go to the school board and council meetings and do the day-to-day unglamorous work that is necessary for meaningful change, he said. “That kind of stuff is what changes the landscape of our communities.”

Topics included “Modern Education and the new Jim Crow,” “The Dos and Don’ts of Running for Political Office” and “Sparking Revolutionary Movements Through Intersectional Organizing.”

The Equity Alliance in Nashville co-sponsored of the convention. Charlane Oliver said she founded the organization two years ago along with other black women frustrated about blacks not “having a seat at the table” when it comes to making decisions that determine the course of the city.

Challenging the status quo,” the group organized and registered over 8,000 voters before the last election, she said.

“But this year we are championing a new cause. We are digging deeper because there are 421,000 Tennesseans who are impacted by not getting their political rights restored,” Oliver said,” emphasizing that these are ex-felons working and paying their taxes and not allowed to vote.

Oliver asked the conference attendees to support legislation that would make it easier for ex-felons to have their voting rights restored.

Akbari described the convention as awesome.

“We have a lot of young African Americans who want to be engaged in the political process,” she said. “I am really happy that they chose Memphis as their first breakout city.”