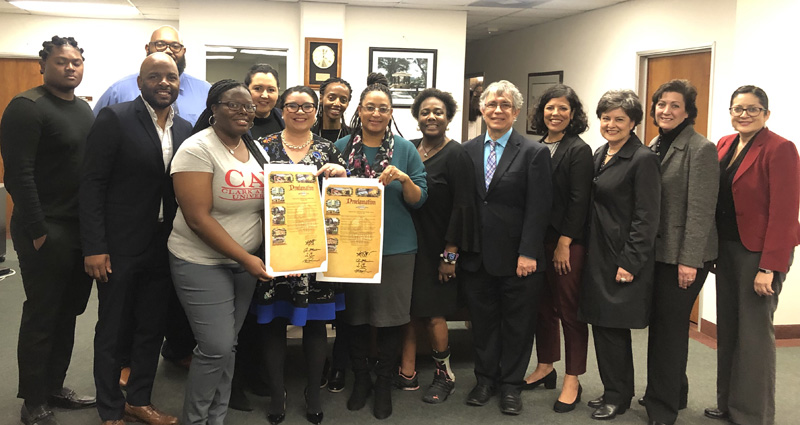 Photos by: City of National City and SWC’s Black Alliance

February marked a special moment for the City of National City in its 150 years since being founded. At their Tuesday, February 5th City Council meeting, Mayor Alejandra Sotelo-Solis and the City Council Members, presented the City’s first proclamation honoring Black History Month.

The month, also known as African-American History Month was established in 1970 at Kent State University and was nationally recognized by President Gerald Ford in 1976 during the U.S.’s Bicentennial Celebration. Prior to, Black Americans celebrated through Negro History Week (the second week of February), which began in 1926 and was founded by Carter G. Woodson and the Association for the Study of Negro Life and History.

Locally, Mayor Sotelo-Solis and the National City Council chose to include local groups that continue to make a positive impact in the City and County. “As the Mayor of a very diverse community, I understand the importance of celebrating and preserving our culture and heritage. It is equally important among our staff, community and especially our young people. I am proud to proclaim February as Black History Month in the City of National City along with our community partners Southwestern College’s Black Alliance,” says Mayor Sotelo-Solis. HBCU (Historically Black Colleges & Universities) Alumni San Diego (HBCUASD) and Southwestern College’s Black Alliance both share the goal of HBCU advocacy and providing a better quality of life for African-Americans throughout the region.

Founded in 2014, HBCUASD serves as the first and only nonprofit whose focus is HBCU advocacy in San Diego County. “The imprint that HBCUASD brings is that we want our children growing up knowing about HBCUs,” says Founder and San Diego native, Chaunteal Webb-Candler. “Through their growth and knowledge about HBCUs, the hope is that there is a natural progression throughout the child’s life and that when it comes time to apply to colleges HBCUs are at the top of their choices. We are very appreciative of the Mayor and Council of National City for this honor and recognizing the necessity for HBCUs as an additional option for students of color in their pursuit of higher education.”

Southwestern College’s Black Alliance got its start in October of 2015 and serves as the premier organization that promotes educational excellence of Black students and fosters a positive and communal workplace environment for the Black professionals within the Southwestern Community College District. “I am very proud that the Alliance was honored by the City of National City,” states Chair Myesha Jackson. “For us, it is a sign that we are moving in the right direction. We are seeing unity in the communities in which we service and being recognized for good work that we do. Our Black students are also seeing that the hard work and dedication from them, is paying off.”

Since the proclamation, the two groups have met and are have committed to bringing more awareness of HBCUs to the SouthBay and are thrilled that they have the support of National City and its community. “National City made history that night and it was a long time coming!” Jackson said.

Mayor Sotelo-Solis was excited to share the City’s newest addition to leadership, Robert Meteau, as Director of Human Resources. She shared, “As we move forward as a City, we will continue to strive to strengthen our relationships in the African American community in National City and throughout the South County Region.”