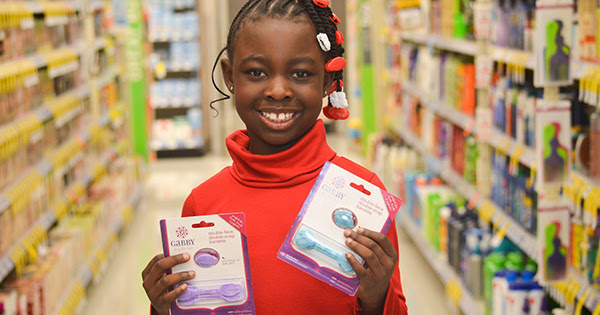 (BlackNews.com) — Elementary entrepreneur Gabrielle Goodwin recently raised $28,000 on Kickstarter with the help of her mom Rozalynn. She will use the capital to manufacture new designs and colors for her hair accessory solution GaBBY Bows. The mother-daughter duo solved the age-old problem of disappearing girls’ hair barrettes by inventing The Double-Face Double-Snap Barrette by GaBBY.

The fourth grader received an outpour of support from more than 300 backers and businesses. Jan-Pro of Columbia and Once Upon a Child stores in Charlotte and Matthews, NC owned by Reginald Barner and Charles Johnson of the Carolina Panthers, Koils by Nature, and Capital City Takeout of Columbia invested generously to make Gabrielle’s Kickstarter goal a reality.

Gabrielle was just five years old when she started daily insisting she and her Mom create a barrette that would stay in her hair. They started the company when Gabrielle was seven years old. In just two years of operations, GaBBY Bows have saved families time, money and frustration in 48 states and eight countries through online sales at www.gabbybows.com. The hair accessory is also sold select retail stores in the Southeast.

Gabrielle is the self-proclaimed President and CEO, handling inventory, serving as the lead saleswoman at trade shows, speaking to community groups and schools, writing thank you cards to customers who order online, and helping with sales taxes. She also hosts GaBBY Play Dates to teach girls in children’s shelters about entrepreneurship.

Gabrielle was chosen as a 2015 SC Young Entrepreneur of the Year (the youngest to ever receive this honor), and GaBBY Bows was one of 14 national finalists for the 2015 U.S. Small Business Administration InnovateHER Business Competition and a 2016 SCORE and Sam’s Club American Small Business Champion. This summer, GaBBY made her national television, radio and magazine debuts on The Real, The Tom Joyner Morning Show, and in Kiplinger Magazine, respectively.

“It feels really good to have people support me because they believe that my business can go to the next level!” says Gabrielle.