“We have seen many automakers take big steps forward with their diversity programs as they have come to see the value of diversity and inclusion programs truly,” stated Jackson, the founder, and president of Rainbow PUSH Coalition.

The scorecard provides a snapshot of each automaker’s success at building and sustaining ethnic diversity and inclusion, primarily focusing on people of color.
Jackson developed the scorecard in 2012.

The six areas under consideration are employment, advertising, marketing, procurement, dealers, and philanthropy.

The automakers earn red, yellow, or green grades, depending upon how well each performed in the six categories above.

A company earns a green grade when they’ve met the best practices for ethnic diversity.
Yellow grades signal some indication of diversity goals, initiatives, and accountability.A red grade is essentially a failure, meaning an automaker’s diversity “initiatives and investments were non-existent, not disclosed, or did not provide enough relevant information for scoring.”

For the first time during the decade the scorecard’s been issued, no automakers received a red grade. 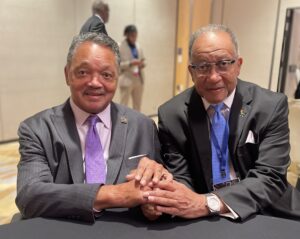 “But one of the things we learn from our history is that when you make progress, you must continue, or else you will slide back. So we join this coalition and the Global Automotive Summit in saying to all the auto industry that we want to make more progress.”

GM and Toyota received green grades in five areas and a single yellow grade in the sixth. GM earned its yellow grade in employment efforts, while Toyota’s was in the dealer network.

However, GM and Toyota scored the highest among the 12 automakers surveyed this year.
BMW, Mercedes-Benz, and Volkswagen scored the lowest, with yellow grades across the board. Between the high and low marks, Ford, Stellantis, Honda, Nissan, Hyundai, Subaru, and Kia earned between four and one green grade.

“We cannot afford to be complacent — our work is far from being done,” Jackson said.
“The automotive industry and the communities it serves would benefit from having more Blacks in the C-suites and as owners of dealerships. In addition, our advertising agencies need larger budgets, and, of course, we need to make sure minorities play a meaningful role in the emerging electric vehicle supply chain.”

Dr. Chavis noted a connection between the auto industry, its success, and the African American community and young people.

“We present not just the past but the present and the future,” Chavis declared. “The NNPA continues to be the national media partner of the Global Automotive Summit sponsored by Rainbow Push Coalition for 23 years. We salute the Rev. Jesse Jackson and Chair John Graves for their consistent global leadership in working with the key executives of the automotive industry. This year’s focus on electric vehicles is timely and strategic for business and career opportunities for Black America.” 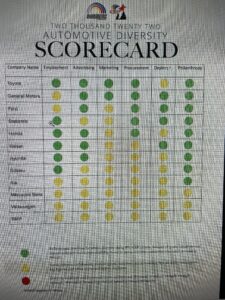 Telva McGruder, GM’s chief diversity equity and inclusion officer, said the company stands proud because of its progress.
“We recognize that we are in the heart of our journey and continue to drive robust DEI connection through our business actions,” McGruder stated.
“GM’s commitment to diverse-owned businesses and communities at large remains central to our overall strategy and ongoing investments.”

We Could and Should Learn From Georgia Voting